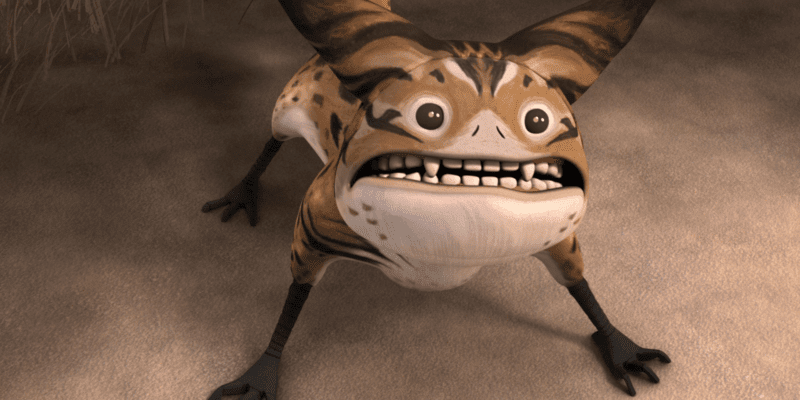 The “Star Wars” galaxy is home to not only humans, aliens, and droids– but also a myriad of different species of creatures great and small, including Porgs, Banthas, Womprats, Wampas, Kowakian Monkey-Lizards, and countless more. Now, as we approach the opening of the huge Star Wars: Galaxy’s Edge area next year at both Disneyland in California and Disney’s Hollywood Studios in Florida, we’ve learned that guests will have the opportunity to not only meet, but take home many of these wonderful creatures.

During the “Inside Star Wars: Galaxy’s Edge” panel at this past weekend’s Star Wars Galactic Nights event at Walt Disney World, Imagineer Eric Baker described one of the locations to be included within the expansive new land. “We have a shopping market, and in that market we have a creature stall. Everyone loves the creatures of ‘Star Wars,’ be they cute or cuddly or creepy or scary. You’ll get to see them all in this place. The creatures will come to life and you’ll get to take one home if you’re lucky.”


“Right now our artisans are focusing on bringing these creatures to life, and a lot of the creatures that we’re doing have never existed before outside of the [‘Star Wars’] literature or an animated series. So for the first time, we’re getting to bring these characters to life, and we’re working with [Lucasfilm designer] Doug Chiang, which is an honor for all of our artists. We’re very lucky to have him working with us.”

“We’re going to bring [a Loth-cat] to life for you to see. He’ll be living, breathing… this is the kind of detail and love we’re putting into everything we’re doing.” Loth-cats were first introduced in the Disney XD animated series “Star Wars Rebels.”

Comments Off on Meet and take home Loth-cats, other “Star Wars” animals from creature shop in Galaxy’s Edge at Disney theme parks