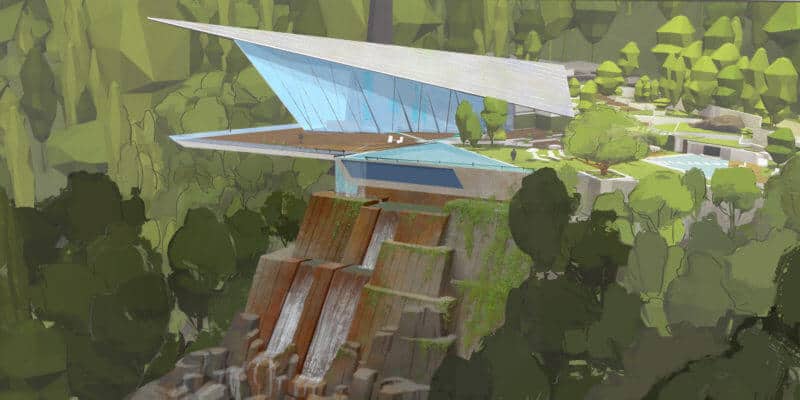 Disney/Pixar‘s animated superhero adventure series “The Incredibles” takes place in a world not too dissimilar from our own, but with some major noticeable differences– beyond the obvious fact that superheroes exist. The story of the upcoming sequel “Incredibles 2” once again takes place in the city of Metroville, set in a perpetual mid-century America, which reflects the design and feel of one of recent history’s most underappreciated architectural periods.

During a recent visit to Pixar Animation Studios’ headquarters in Emeryville, California, I had the wonderful opportunity to sit down with “Incredibles 2” production designer Ralph Eggleston, visual designer Philip Metschan, sets supervisor Nathan Fariss, and production manager Michael Warch to talk about their work in bringing the world of The Incredibles to life once again, explore the concept of “Mid-Century Mundane,” and even touch a little bit on the Incredicoaster attraction (which they also helped design) coming in just a few weeks to Disneyland Resort.

Inside the Magic:  I imagine going into production design on a sequel is a much different process than embarking on a completely original film. Can you explain the difference between those two processes?

Philip Metschan:  I would just say you spend an awful lot of time on an original developing the look, like on ‘Inside Out.’ Ralph was going crazy figuring out what was inside the director’s head, where in this movie we have the look. That’s the obvious difference.

Ralph Eggleston:  Yeah, we have a starting place. That’s really true. It’s not just the look of the film, but primarily the characters. The reason people go see films is characters. They have to be appealing, and they have to work for all kinds of purposes: animation, every angle. That’s our bread and butter, is character. We do character animation. The worlds can be fantastic and beautiful and everything we want them to be, but they are always secondary to our characters.

Metschan:  We do spend a fair amount of time plussing our characters, bringing them up to the new technology of rigging and all that, so they hardly come in for free.

Nathan Fariss:  Yeah, so much of the technology changes, even if you were running sequels back-to-back. In a few short years, technology has changed enough that it requires some updates. And so when you put fourteen years between those films, the technological change is gigantic. It’s almost like opposite sides of the planet, practically. There’s very little reuse, but there’s also a pretty clear target as far as the feel of the film. While you might not be able to match concrete shader to concrete shader and want them to line up, you know that you want the sequel to feel like the first film.

ITM:  You’ve mentioned how the Underminer’s Tunneler went from five to six runners in between movies. Are there any other examples of props or locations that had to changed after being carried over from the first film?

Fariss:  That was the most complex one by far, because it was really something that was a background prop that went into a hero environment. Stuff that did carry over from the first film included the track meet stadium [from Violet’s school], that parking lot [where the Incredibles confront the Underminer], [and] Edna Mode’s house we did bring over. That one actually came over fairly smoothly. Of anything, that’s the one we most closely reused from the first film. There’s a great big carved mural that’s in her living room, and that was one that we actually now have the technology to make that a couple steps better and make it real, three-dimensional shapes, that sort of thing.

We did bring Bob’s car over, the Incredibile, that one came over as well as their woodie station wagon. Both of those got remodeled a little bit because we did spend some time trying to upgrade all the cars in the film to make them feel a little more realistic, a little more detailed.

ITM:  You’ve showed off some impressive designs that you mentioned didn’t make it into the finished version of the film, such as the first version of the Parr family’s new house. How does a major change like that come about so late in production?

Eggleston:  It was really a story issue. It was about seven or eight sequences suddenly became ‘Someone mysterious has hired Helen, and they’re going to get this house.’ All of that came together into this one house. Prior to that, we followed them around. It was a lot of over-exposition, which means time, which means building more sets, which means more boring stuff for the audience to sit through. We had this other house that we finished, and that was just part of what we did. Now with this new home, we were able to shrink it down into one home, but a much bigger home. That’s why it happened.

Eggleston:  And it made the struggles more obvious and painful. And just the idea of Bob ironing in the twenty-thousand-square-foot home is really funny. There’s a lot of humor in the scale of it, and it’s really great. All the work that everyone did on it, it’s become a character in the film.

Eggleston:  It happens in various stages throughout everybody’s job here, from initial storyboard– sequences [in ‘Incredibles 2’] have been boarded upwards of thirty times sometimes– [to] design, pre-vis, modeling, all the way through the final film. Sequences got cut from the film. They’re great and some of them were almost finished. It just was not making the story better. It really is quite simple.

Fariss:  The way I rationalize it is, I say ‘All of the stuff that’s lost kind of goes into a more global consciousness of what the world is.’ And so even though we lose it, the exercise of making it actually informs things that do get seen.

Metschan:  Often stuff, if reaches as far as modeling and shading, like actually hits the sets department and we’ve built a three-dimensional thing that’s a production asset, we will often use that someplace else. Like that first house that we made, we kind of set it aside, we took a lot of the furniture and put it other places in the film, and then when opportunity arose we said ‘Hey, can we use that house, because I think that would fit in here pretty well?’ And then we don’t have to make a new thing.

Michael Warch:  For me it’s a different kind of loss, being production. If I lose two months on something that gets cut I don’t get two months added to my release [date]. I have to maybe add more people, or cut scope of the movie, so that’s always a negotiation with either producers or the creatives.

ITM:  You’ve used the term ‘Mid-Century Mundane’ to describe the look of the world of ‘The Incredibles.’ Can you describe what that is to someone who knows nothing about architectural trends?

Eggleston:  If you were to Google ‘mid-century architecture’ you would see Brasilia, you would see things from Palm Springs, you would find really cool Frank Lloyd Wright, Richard Neutra, [Archibald] Quincy Jones [designs], all this great stuff. That is what people know, and that’s great. It’s insanely awesome, but what we were also interested in is the boring stuff– or allegedly boring. What does a motel look like in the 50’s?

Fariss:  If you only use those showpieces, you’ve got like two dozen buildings that you could use. And each one is so unique and so noteworthy that you can only use it once. You’d have a movie with [only] twenty buildings in it.

Eggleston:  It’s like having a great suit that you can wear once a year. But we needed a lot more than that. We needed houses and buildings and cities of this stuff, and so we started looking around saying ‘What are the cool things, like churches and synagogues and schools and malls?’

Fariss:  Sporting goods stores. I remember going to places like that when I was a kid that had that mid-century design.

Metschan:  Blending inside and outside.

Fariss:  Concrete and steel and plastic. It’s the new technology, the things that make life better. That sort of stuff.

Eggleston:  That’s kind of it. Not a lot of clutter.

ITM:  Geographically, where would you say you pulled the most influence from?

Eggleston:  One stop shopping, Los Angeles or Palm Springs for mid-century anything. But we pulled things from Great Neck, New York. Their original neighborhood was designed after that [town]. There’s some New Canaan, Connecticut, places like that have a lot of really great mid-century architecture.

Fariss:  And there’s stuff scattered even just around here [in California’s Bay Area]. Going back to the highway, there’s a Denny’s or something over there that’s a pretty fantastic mid-century diner. It’s got great big stone, and it’s got a zig-zaggy roof.

Eggleston:  Years ago I found a Richard Neutra house for sale at a reasonable price at the top of Wildcat Canyon here. It was glass, view of the bay, the whole thing. The problem was they had added a gable on the top and put an air conditioning unit [in], and added a bunch of late-80’s stucco rooms. It would probably cost more to undo it and put it back to its original state, [sighs] which I wish I had done at the time. [laughs] Oh well.

ITM:  Touching on theme parks before I let you go, the upcoming Incredicoaster at Disney California Adventure sure looks to be a similar design to the Incredibles’ house in the new movie.

Eggleston:  Yeah, we had worked on the coaster stuff, a bunch of people contributed various phases of stuff for it– sculpture, and [writer/director] Brad [Bird] worked on the script for it. But the queue was probably going to be the biggest influence from [the movie]. People spend more time in line than on a ride, so how do you make it look Incredibles-y? And so that was one of the things we wanted to do.

We got some really cool umbrella structures that remind us of the Frank Lloyd Wright [designed] Sam Johnson’s home and Johnson’s Wax factory in Racine, Wisconsin. And also E’s house and of course the Parr home, so it’s a collage of the world of ‘The Incredibles’ in one two-hundred-square-foot area and then you get on the coaster and go. 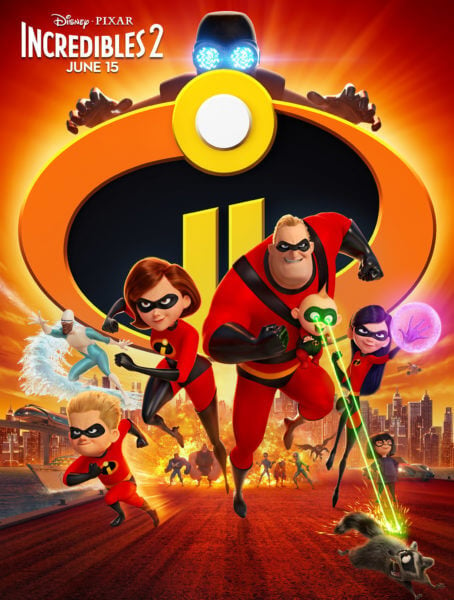