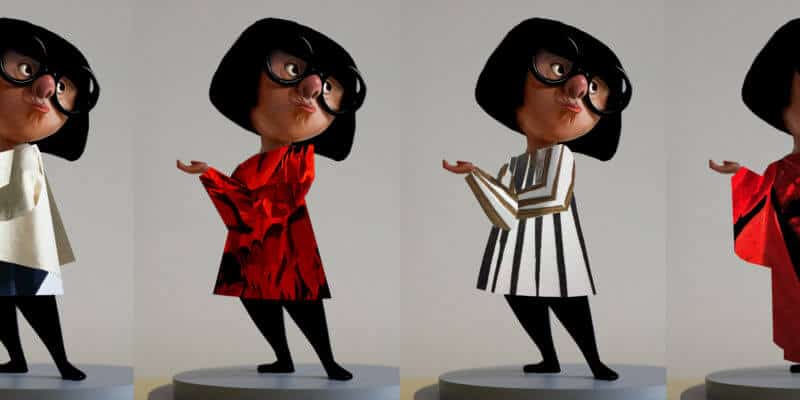 The Parr family, also known as The Incredibles, are the most fashionable crimefighters in animation thanks to their friend and costume designer Edna Mode (voiced by director Brad Bird). In the highly-anticipating upcoming sequel “Incredibles 2,” the talented costuming team at Pixar Animation Studios were challenged with updating the look of the movie’s world and remaining true to the 2004 original, all while working under Ms. Mode’s fictional but watchful eye.

During a recent visit to Pixar‘s headquarters in Emeryville, California, I had the opportunity to sit down with shading art director Bryn Imagire and tailoring lead Fran Kalal to discuss the thought and planning that goes into the wardrobe design for Disney/Pixar’s first family of superheroes, The Incredibles.

ITM:  I find it fascinating that you’re costume designers for a movie series that features a character who is also a costume designer. How does that affect your approach?

Bryn Imagire:  It makes it so fabulous. I think that in CG, this kind of project [doesn’t] come around very often. We’re all so thankful that it came along, because when there’s a fashion designer in the show I feel like you get this license to be able to make everything really great. The bar that we had to reach is high on this, and Brad has huge expectations for the design, and he has really great taste. It’s really fun to work with him, just to get him to be into all the costumes was really amazing.

ITM:  When it comes time to design a costume or outfit that Edna Mode designed in-story, how do you put your mind in the mind of a fictional designer?

Imagire:  I think when I was designing her costume, I tried to think of all the things that I learned in art school, and the attitude that she brings to her design– very to the point and very specific. The cool thing about being a designer is that you can be inside someone else’s head for a while and imagine what that person would think. A lot of times I feel it’s subjective and we can tell Brad, ‘well I think she would do this,’ and he’d be like, ‘no, no, no, she wouldn’t do that.’

It’s just a good dialogue to have with him because, as artists we’re bringing our own aesthetic to the project. He has to weigh in because he’s the director, and it’s a nice dialogue to have. Even when things go from design into production, the design process still continues all the way to the end. There are a lot of decisions and happy accidents that happen in the computer that we would never think of. In live-action you might not have [that] so much, because you just end up with what they make. In CG there are all these funny accidents that happen that are unexpected.

ITM:  When a happy accident comes up like that, how often do you roll with it and how often does it get corrected back to the way it was intended?

Imagire:  I would say ten percent of the time we use it.

Imagire:  It is interesting, because it is something that happens in this medium that [doesn’t come up in others].

ITM:  The term “mid-century modern” has come up a lot in Pixar’s discussions of the world of “Incredibles 2.” How would you describe the fashion sense of this movie in other terms?

Imagire:  I would say graphic, and not simple, but Brad has always talked about the detail– you go too far, but then you pull yourself back and start shedding unnecessary details, and you stop as some point just when it feels right. He likes to have the essence of design and not have a lot of frivolous details, so that’s how I approach design when I work with Brad.

Kalal:  In this world, particularly, I think ‘graphic’ is a great word because the characters’ faces are so stylized, but the way that we render things is so photorealistic. So the costumes had to move [into] this middle space. They needed to move naturally, but not quite as naturally as you would see in ‘Coco’ or in real life. We needed to fit this really graphic middle ground with the clothes.

ITM:  “The Incredibles” is heavily inspired by the world of comic book superheroes. How much were comics consulted in putting together the costuming work for your department?

Imagire:  On the first film we looks at comic books a lot. The palette of the first movie was based on comic book heroes– red, blue, yellow, very strong green. We didn’t use a lot of secondary colors because Brad comes from animation. Animation tends to be very bold and you have to get the value and the color just right. You can’t have pink or all these shades of grey. We did look a lot at comic book images on the first “Incredibles,” and we did have to take all the ideas that we had on the first film and continue them. It’s not like any time has passed [in the story] from then to now. We kept a lot of the original ideas that we had in the first one to this one.

Kalal:  For the background characters, we’re always looking at them in context. We never have just one walking on a runway by themselves. We’re always looking at eight or ten of them in a row walking. If any of them stands out more than any other on, then we know we need to scale back, and get them back into the world.

I think the exciting thing about background characters is that you’re wanting to execute the costumes of eight or ten all at once, so it’s all about ‘let’s get everything to seventy percent of that quality, and then take it home to a hundred and ten only where we need to.’ Whereas for a primary character, everything has to be a hundred and ten percent from every angle, because that’s how you’re going to see them. It’s such a different, unique kind of challenge.

Imagire:  When I was thinking about the design of Evelyn’s [Deavor, played by Catherine Keener] costumes, I knew that Brad loves black and red. I threw in white also, and bold pattern on her because I knew that any time she’s in a sequence, if she had that combination of contrast and pattern, your eye would always go to her. The planning [was to] keeping all the contrast and the saturation and the patterns on the main characters, then everyone else in the background palette-wise, we kept very low contrast, and very grayed out compared to the mains.

You’ll notice when you see it that all the main characters are red, black, very contrasty patterns, and very strong colors. I think in Helen [Parr, played by Holly Hunter] I always try to keep red, or red and pink, or red and off-white as an element in her palette so that when you see all of her costumes standing next to each other, there’s a consistency with her. Brad always felt like the family should revolve around Helen, so it’s an interesting [task].

ITM:  Finally, “Incredibles 2” is set in a vague mid-century period but not in a specific date. Are there any examples of more modern design sneaking into the fashion of movie?

Imagire:  Yes, [with] Violet. If you look at 1950s fashion, it’s very hourglass– there are the poofy skirts and the tight shirts. And for [Violet], because she’s supposed to be shy in the first film, she’s very withdrawn, her hair is covering her, that kind of silhouette just does not feel right for her. We struggled with that on the first film. We used mid-century as a jumping-off point but we didn’t stick to that all the time, which I felt freeing, especially with Violet because she was so shy. Her clothes had to be baggy, her jeans had to be baggy, her colors had to be very desaturated. And because she’s Violet, on the first film [all of] her colors were purple or some kind of variation of purple.

And in the end it turned out she was in that pink shirt, but I felt like she would be much more open– sort of like she’s blossoming as a teenager. She was the perfect example of where we didn’t go mid-century; we went modern with her. And then Bob, too– when he’s walking in with Edna in the first film, in her house– he’s just wearing a black t-shirt and khakis. Brad really liked that: a very simple and graphic idea. 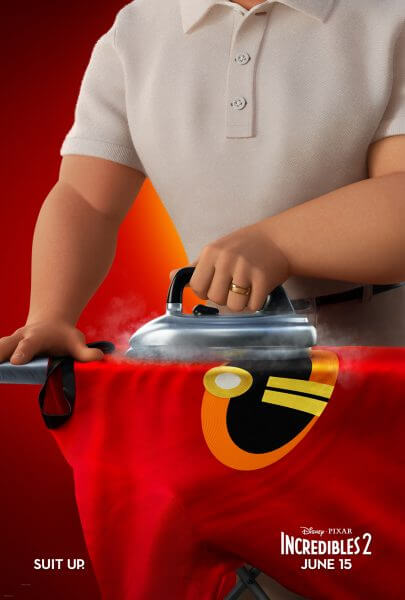 Disney/Pixar’s “Incredibles 2” will be released into theaters nationwide on Friday, June 15th.