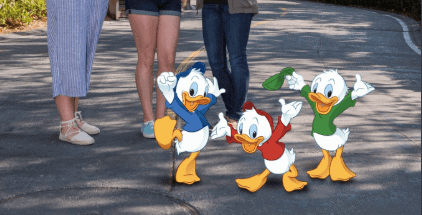 Available at Disney’s Animal Kingdom, this new Magic Shot adds Huey, Dewey, and Louie into your picture when taken by a Disney PhotoPass photographer. Donald’s rambunctious nephews are featured in 80s-style artwork from the original “DuckTales” series.

Raise your hands if you're excited for this new Huey, Dewey, and Louie Magic Shot at Disney's Animal Kingdom! pic.twitter.com/gjlaPBGaFP

Other members of the “DuckTales” crew, including Scrooge McDuck and Launchpad McQuack, are featured during Donald’s Dino-Bash! at Disney’s Animal Kingdom this summer. After discovering his ancestors were dinosaurs, Donald has transformed DinoLand USA into a prehistoric party.

For more information on Donald’s Dino-Bash!, head over to the Walt Disney World website, and be sure to snap a Huey, Dewey, and Louie Magic Shot with a Disney PhotoPass photographer!