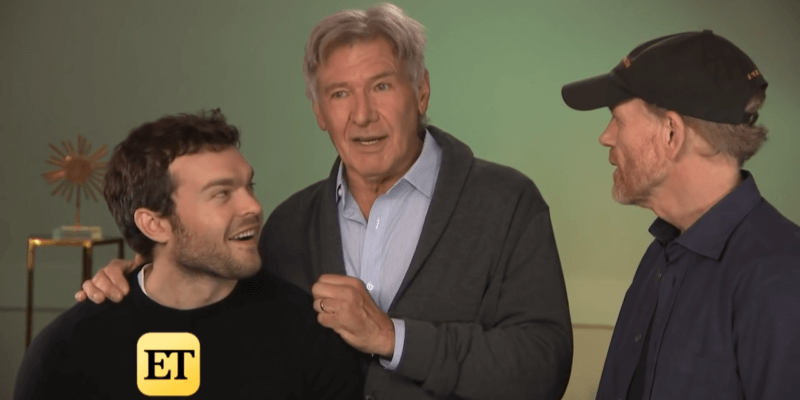 The character of Han Solo, originally played by Harrison Ford, is a beloved figure in the Star Wars universe. Alden Ehrenreich is stepping into the role for “Solo: A Star Wars Story,” and during a recent interview, Harrison Ford surprises the young Han.

During a segment for “Entertainment Tonight,” Ehrenreich is asked about the guidance he received from Ford as he prepared to play Han. As he’s answering, Ford sneaks in with director Ron Howard and jokingly tells Ehrenreich to get out of his chair.

Taking on such an iconic role is no easy task, but Ford compliments Ehrenreich’s portrayal of the younger Han. “I just thought it was spectacular. And I just thought he was so smart about what he did and how he did it. I couldn’t be happier,” he said.

This encounter isn’t the first time the two Hans have met. The pair had lunch during pre-production of “Solo: A Star Wars Story” and Ford served as an advisor during filming.

“Remember to never let them tell you the odds.” #HanSolo pic.twitter.com/Zu8a5CHDG3