That’s more like it. Back in February, we got the first trailer for Sony’s “Venom” and, much to the disappointment of most, it did not reveal the popular marvel villain in all his symbiotic glory.

The new trailer, which debuted last night, gives us everything we could have wanted and more. Here is a closer look at the second trailer for “Venom.” 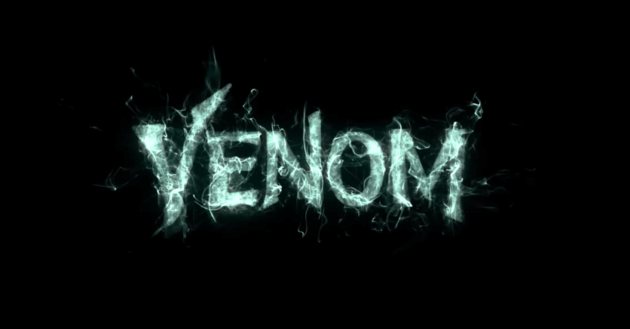 The trailer opens on a shot of people working some kind of crash site. The wreckage doesn’t appear to be from any sort of ordinary vehicle and workers can be seen in hazmat suits.

Then, one brief shot tells us exactly what this scene is. We get a glimpse of a symbiote in some kind of container, proving that this is an alien crash site and the location of the symbiote’s arrival on Earth. 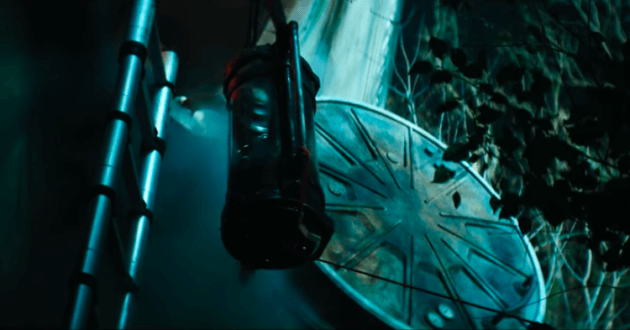 After a shot of the symbiote being put into another container to be carried from the site, we then get a look at multiple symbiotes in the same containers.

While this is happening, we hear voiceover from Dr. Carlton Drake, who runs the Life Foundation. “History starts today,” the voiceover says as we see Drake open the doors to a truck where the symbiotes are being stored.

We then see Eddie Brock and Anne Weying, played by Tom Hardy and Michelle Williams respectively. In the comics, Weying and Brock marry and divorce. It is unclear what their relationship is in this movie, though it appears to be romantic.

It may be worth noting that Weying actually bonds with the Venom symbiote in the comics as well at one point.

We hear Brock say “you work for an evil person,” referring to Drake. He then explains that he is going to do his job.

“I’m a reporter,” Brock says. “I follow people that do not want to be followed.”

Next, we see Brock interviewing Drake before being forced to leave by security after asking about allegations of preying on vulnerable people for scientific tests.

Brock then confronts a woman he caught following him. She explains that she works at the Life Foundation and needs his help. This is where things get interesting.

We then get a series of shots from the Life Foundation, starting with a symbiote escaping its containment.

This symbiote is a unique color. It appears to be a dark blue or maybe black with some yellow mixed in. It could perhaps be the symbiote that eventually becomes Phage. 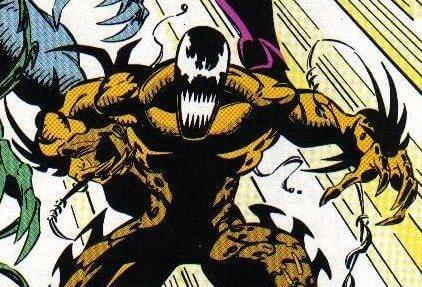 We then see that same symbiote bond with a human, much to the apparent delight of Drake. This could be the first accident that leads to the potential villains of the film.

“Carlton Drake believes that the union between human and symbiote is the key to our evolution,” says the mystery woman, who is played by Jenny Slate.

We then see Brock wandering the halls of the Life Foundation and coming across a woman in containment. The windows appear to be frosted over, which makes sense because in the comics, the symbiotes natural habitat was dark and cold.

The woman doesn’t remain in containment for long though. She looks at the passing Brock and screams before launching herself through the glass and onto him. He escapes, but it appears this contact with a symbiote is what changes him. 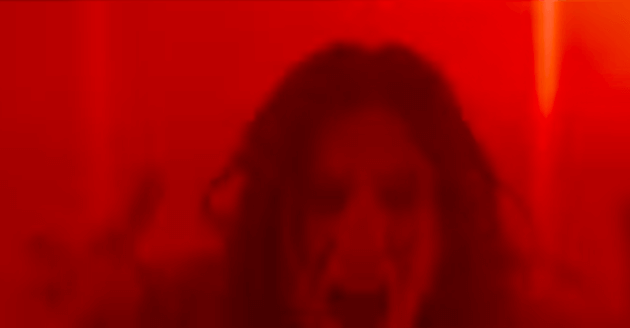 As for this woman, it is possible this is the symbiote Scream, best known for her role in “The Amazing Adventures of Spider-Man” attraction at Universal Orlando’s Islands of Adventure. Donna Diego, the human that bonds with the Scream symbiote, is set to appear in the movie. 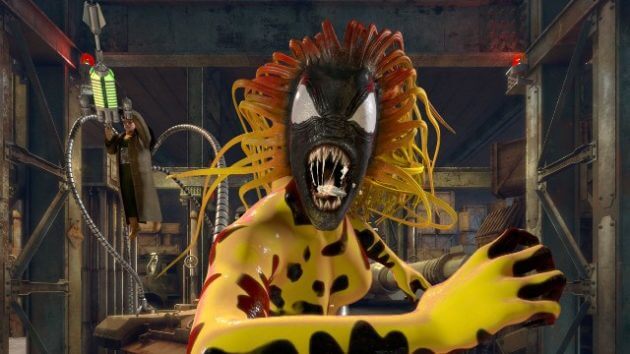 Next, we follow Brock home where he begins to complain of an unexplained illness. This is where we get our first look at the symbiote beginning to take over his body.

Then, in a moment that made comic book fans squeal with joy, we see Brock looking into a mirror and we hear the voice.

Venom is a very complex character in the comics, as he is in many ways two separate characters controlling one body. The voice Brock is hearing is that of the symbiote attempting to control his body.

Next, some sort of security team from the Life Foundation shows up at Brock’s home to retrieve the symbiote he unknowingly stole. That’s when the symbiote takes over for the first time.

Tendrils shoot out of Brock’s arms and back, attacking and likely killing the Life Foundation goons.

“Why would we do that,” Brock asks, apparently scared and confused.

It’s interesting that he uses the word “we” here, as it points out he has already accepted the symbiote as a part of him and is not simply blaming the actions purely on him. I would venture to guess the symbiote responds by telling him it can’t make him do anything he doesn’t already want to do on his own.

We then see Brock walking and speaking out loud to the symbiote in public. 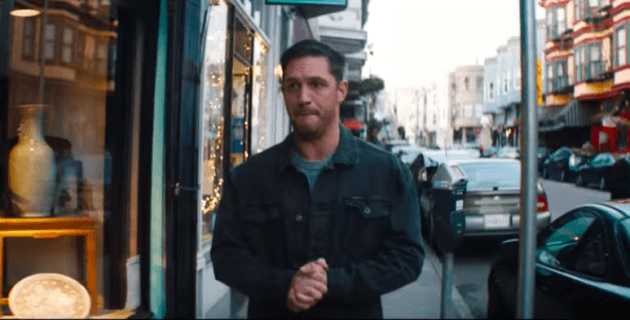 “If you’re going to stay, you will only hurt bad people,” he says confidently while simultaneously desperately pleading.

The symbiote doesn’t take kindly to the offer and proves it is in control by pinning Brock to a wall and not allowing him to fight back. 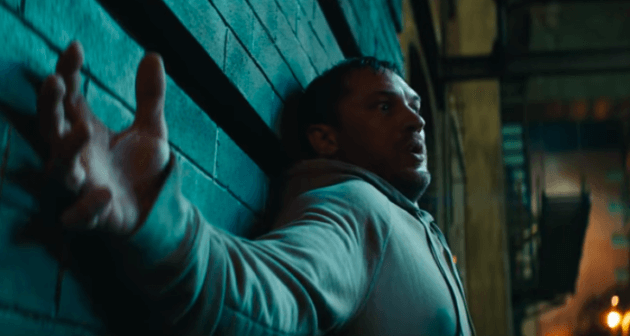 An action sequence follows, showing a couple of different chase scenes before another voiceover begins.

The voiceover asks “are you willing to sacrifice the one thing you hold most dear,” as Weying is shown once again. It then cuts to a bound Brock warning Drake that he should be “extremely afraid.”

One of the last shots of this sequence shows more tendrils shooting out of Brock’s chest to pull himself back to his airborne motorcycle. 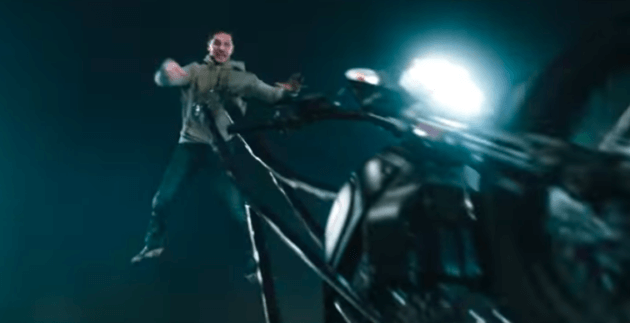 Then it happens. The moment we’ve all been waiting for. The symbiote starts to fully take over. 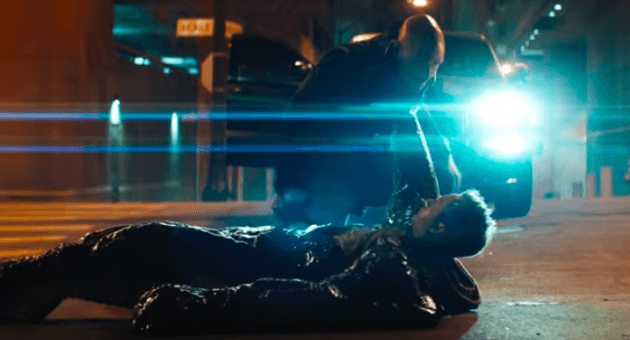 We see one of the Life Foundation goons standing over Brock asking “what the hell are you,” before the symbiote grabs him by the throat and responds in its ominous voice.

This gives us our fist look at Venom as so many have come to know and love the character over the years. It is certainly an incredible upgrade from from the version of the character we got in “Spider-Man 3” back in 2007.

Sony’s “Venom” will swing its way into theaters October 5.

Comments Off on We are Venom: Breaking down the impressive second trailer for Sony’s “Venom”