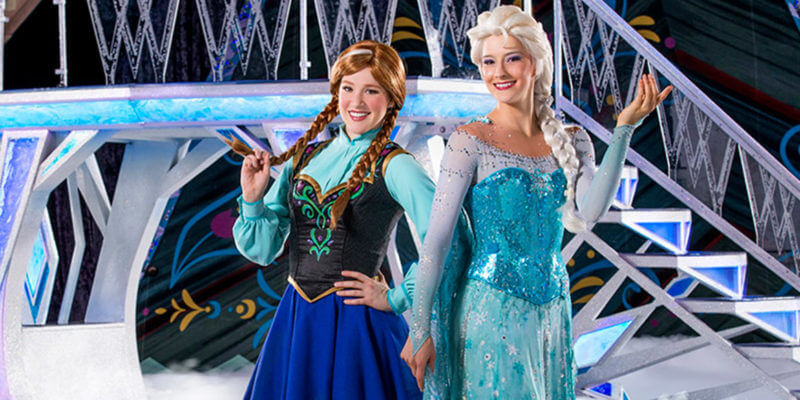 For the first time in forever… the dazzling Disney on Ice show “Frozen and Friends” is touring through North America with Anna, Elsa, Olaf, Sven, Hans, Kristoff, and even a little help from Mickey Mouse and friends!

Last night I attended the 2018 premiere performance at the Long Beach Arena in Southern California, and it was a tremendous amount of Frozen fun. At the top of the show, Mickey enlists his pals Minnie Mouse, Goofy, and Donald Duck– plus an assorted cast of other famous Disney characters– to kick off the popular story of the Snow Queen and her daring, loyal sister… all presented via talented ice skaters.


Each and every song from the mega-hit 2013 Disney animated musical “Frozen” is accounted for in this Disney on Ice production, and the set design, choreography, and costumes are all top-notch. The entire show runs about ninety minutes, plus a roughly fifteen-minute intermission after the showstopping “Let It Go” sequence, complete with magical snow falling from the arena’s ceiling.

“Disney on Ice: Frozen and Friends” will be touring from now through December across the United States and into Canada. Be sure to visit Disney on Ice’s official website for more information, a complete list of tour dates, and advance ticketing resources.