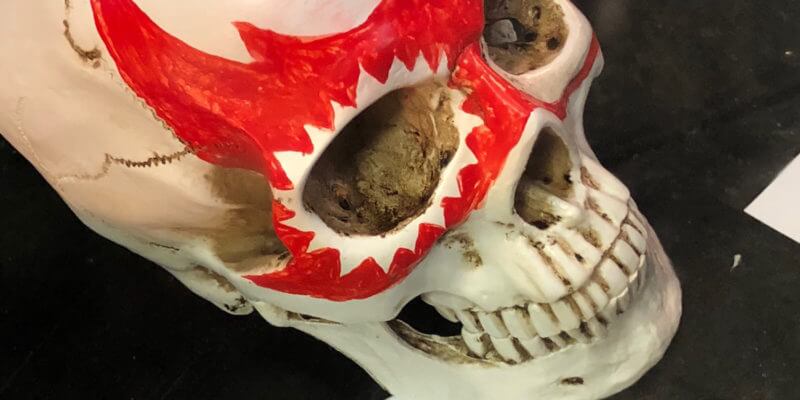 Lurking within one of the United States’ most haunted cities, the Overlook Film Festival 2018 took over New Orleans this past weekend with a showcase of terror both on-screen and off.

Overlook is much more than merely a film festival. Over four days, horror fans flocked to the city to see the latest suspenseful and shocking films and to experience a few shocking moments themselves by way of numerous immersive experiences.

Even before the first screening, those eager to jump into the immersive entertainment had a chance to take part in what was anticipated to be an all-encompassing, weekend-long alternate reality game (ARG) simply dubbed the Overlook Immersive Game.

In past years, when the festival was in other US cities, this game delighted attendees by surprising them with eclectic character interactions, mind-bending puzzles, shocking scenes, and even a middle-of-the-night hotel room break-in or two. It was an event that completely consumed those willing to give themselves over to it to live out their own horror film.

But this time around, the festival decided to scale back the game with new designers, making it more accessible and approachable for a casual audience interested in actually seeing more of the event than just the ARG. What ensued was a glorified scavenger hunt that sent players walking miles from one corner of the French Quarter to the other in search of clues, solving puzzles, and having not-so-meaningful interactions with one-dimensional characters. 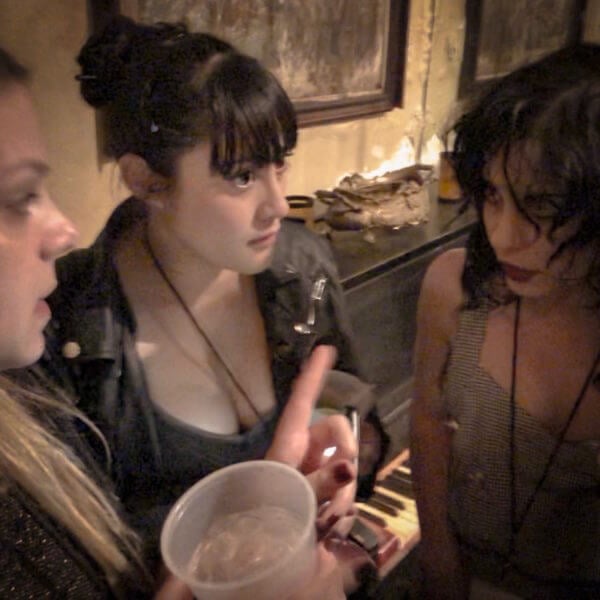 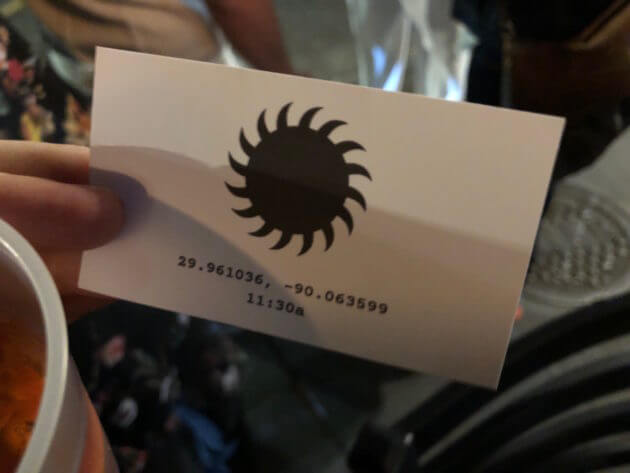 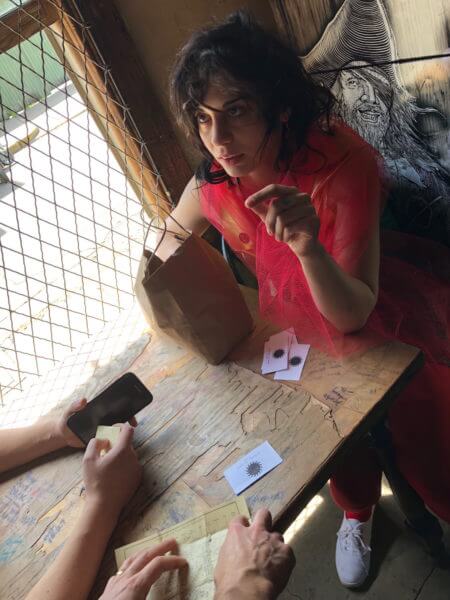 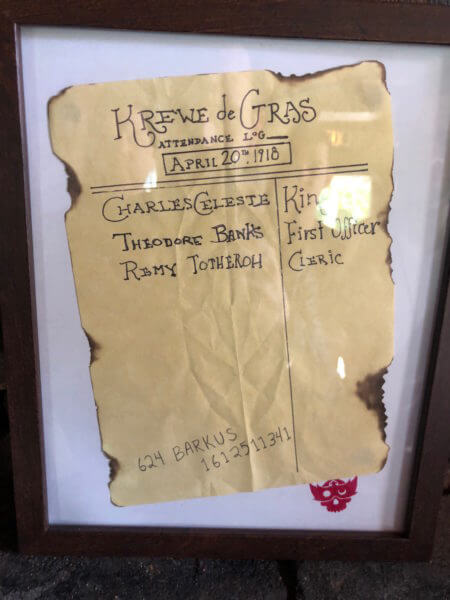 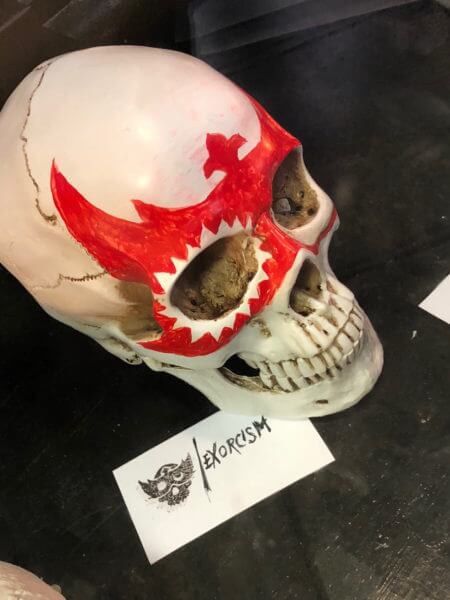 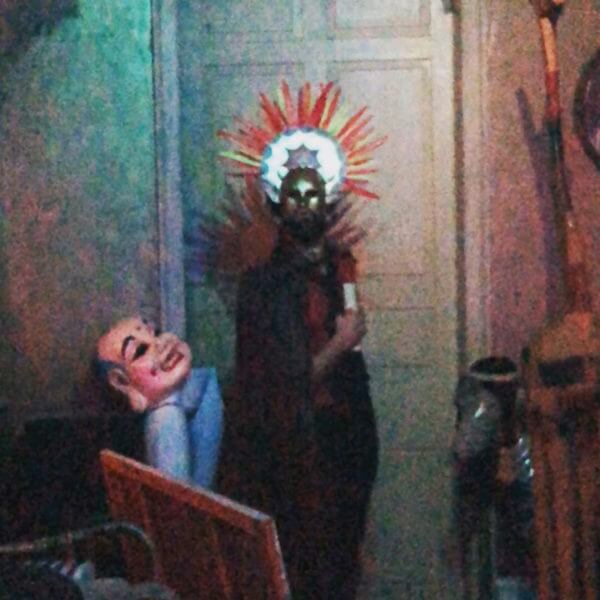 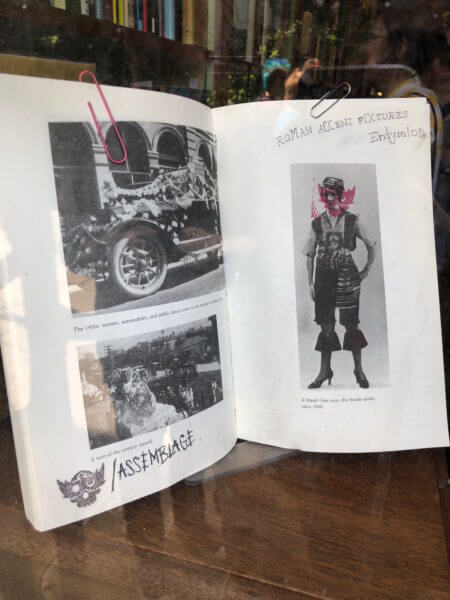 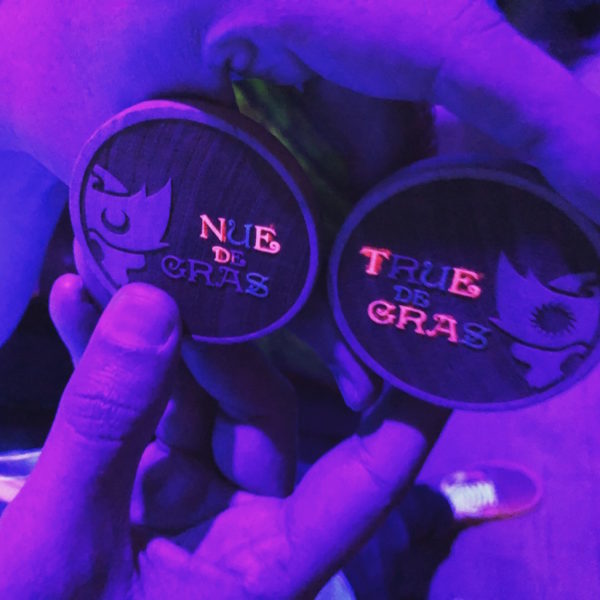 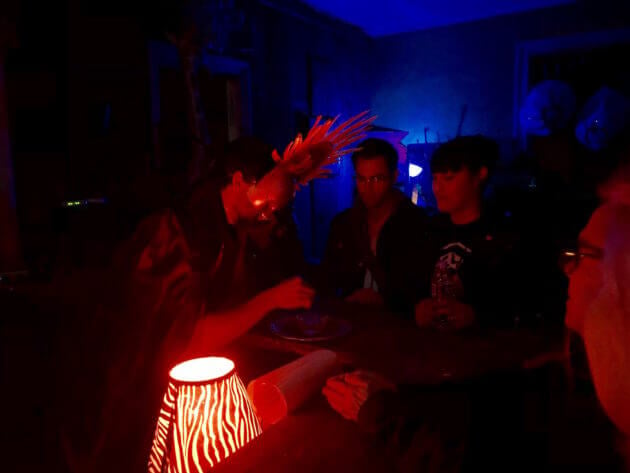 The game’s story was based exclusively on the unpredictable world of Mardi Gras and the various sometimes warring “krewes” that make it happen each year. There was a small element of the paranormal, but mostly it was just odd people bickering.

To recap this adventure further would serve no purpose, suffice to say that in all it was a tremendously fun time and a great bonding experience for players, despite the game itself not quite living up to expectations from previous years. Those who wanted a deeper, richer experience were left underwhelmed while casual players were still left feeling confused, leaving the entire effort without a true audience.

Fortunately, beyond the Overlook Immersive Game there were plenty of brilliant immersive experiences to be found.

Among the best was a new incarnation of the extreme horror experience known as Blackout. Sadly, all thoughts and details of this experience must be withheld due to an embargo on this particular show, as creators Josh Randall and Kristjan Thor were using the festival to workshop the experience. No doubt we’ll be seeing more of this down the line.

Beyond that, the popular haunted play Delusion made an appearance at Overlook, with director Jon Braver debuting the latest incarnation of his beloved creation in the form of a new cinematic VR series. Based on the 2014 show Delusion: Lies Within, the VR series is not a first-person experience but rather a 360-degree film set within the Delusion universe. 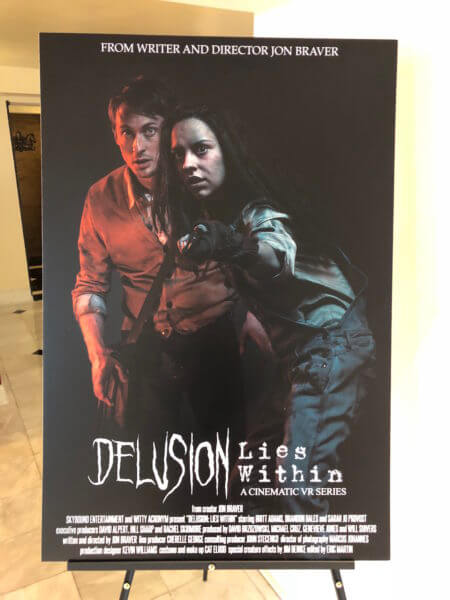 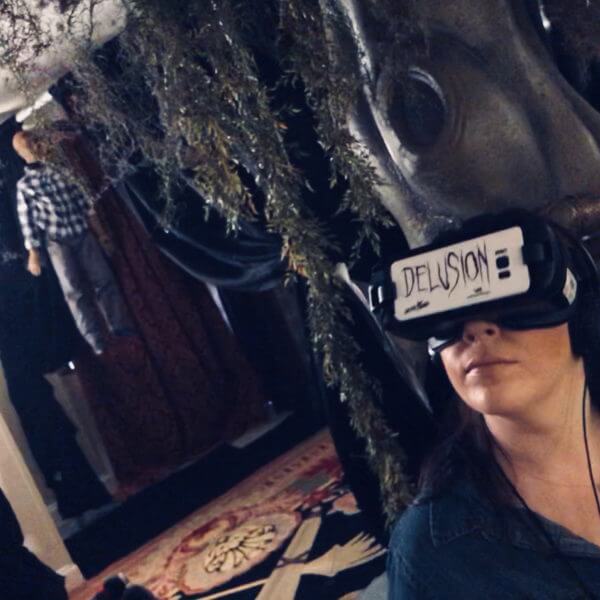 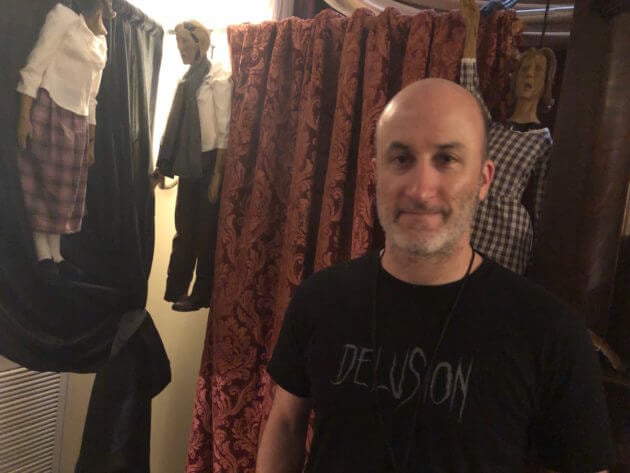 Braver and his team, in partnership with Skybound Entertainment, went to great lengths to recreate the feeling of being in the Delusion experience while still creating a fun supernatural horror film. It follows the original “Lies Within” experience beat-by-beat, even having been shot within the same residence the experience took place in, recreating all of its most memorable moments.

But the events play out differently than any audience member may remember, focused not directly to you as the viewer but instead on two new main characters that you follow around. You’re a “ghost” in this experience, as Braver puts it, able to watch it all unfold around you via perfectly produced live action virtual reality sequences.

The series arrives as two seasons, with the first four episodes having been showcased at Overlook and wide distribution to follow soon. Beyond that, season two will finish up the story.

Meanwhile, Braver is actively working on this year’s Delusion live experience, details of which will be announced in the weeks ahead with tickets expected to go on sale in May. This year’s tale will center around time travel and have a bit of an Indiana Jones flair. 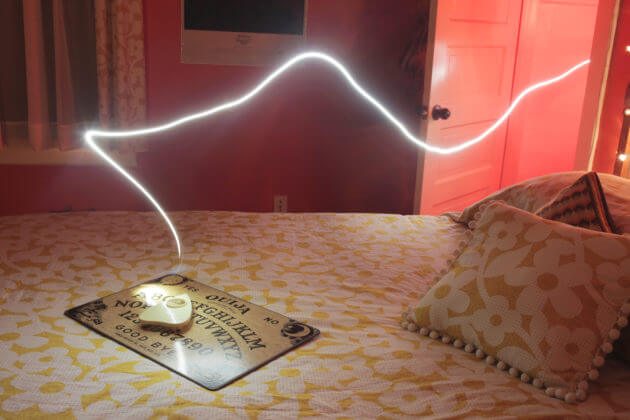 Among the other immersive highlights of the Overlook Film Festival this year were a partial remount of In Another Room from E3W Productions, which frequently praised haunted experience in Los Angeles last year. The excerpt performed at the festival took participants into room 344 of the Bourbon Orleans Hotel in which a rather sad ghost story played out. The room was transformed into a ’70s era bedroom and the touching story with a paranormal twist brilliantly performed by two excellent actors, enhanced by interactivity and special lighting and musical moments. 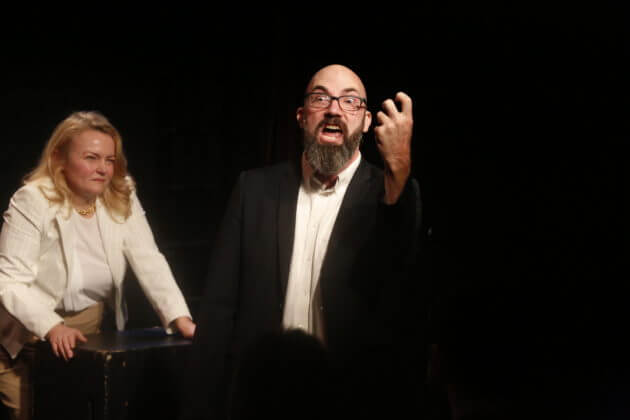 Meanwhile, the oddly-named Pumpkin Pie Show: One-on-Ones proved to be a stunningly personal experience. As its name suggests, this performance was literally one actor with one audience member, an extremely limited experience during the festival. That actor is the incredibly versatile Clay McLeod Chapman, whose one-man show is entirely free of costumes, makeup, lighting, music, set pieces… or anything other than himself. And yet, it is completely immersive thanks to his brilliant storytelling skills. Armed with a variety of his own dark writings that bring to mind the classic tales of Edgar Allen Poe, Chapman transforms before participants’ eyes through his acting abilities alone, delivering a performance that’s impossible not to become entranced by. 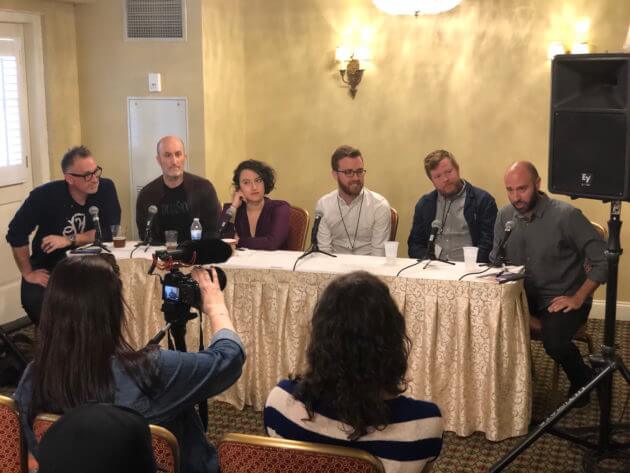 A Conversation with Immersive Creators proved to be a great opportunity for further storytelling, though not of the fictional kind. The panel consisted of the festival’s immersive artists including Darren Lynn Bouseman (Tension), Jon Braver (Delusion), Annie Lesser (Infinitely Dinner Society), Aaron Keeling (In Another Room), and Kris Thor and Josh Randall from Blackout. And each offered insight into their creations, telling humorous stories of moments-gone-wrong as well as emphasizing the need for safety and transparency between creators and audiences. At some point or another, every single one of them also admitted they have no idea what they’re doing – in the sense that they’re simply artists figuring out this wild world of immersive theater as they go. Don’t take that statement the wrong way. They are professionals and know exactly what they are doing with their exciting creations. But they feel as if they don’t, pouring their souls into each performance with the hopes that somehow it will connect with those who attend. (It’s working.) 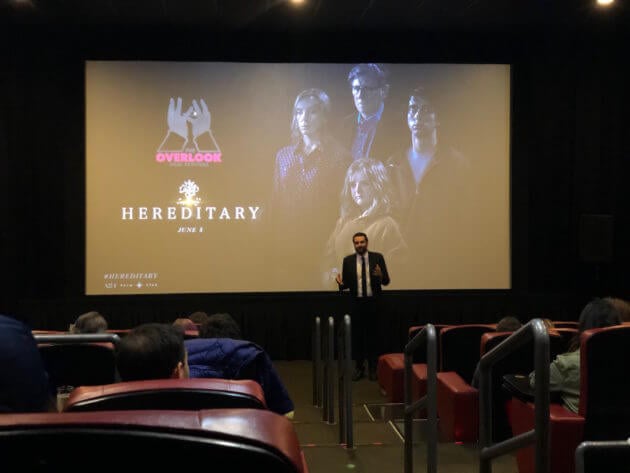 As for the films of the Overlook Film Festival, the standout was easily “Hereditary” – fresh off the buzz from its debut at Sundance weeks ago. Two simultaneous packed screenings of the film shocked audiences with an indescribable level of suspense as the story slowly unfolded to its unpredictable conclusion. The film easily lives up to the hype and should not be missed when it hits theaters in June. 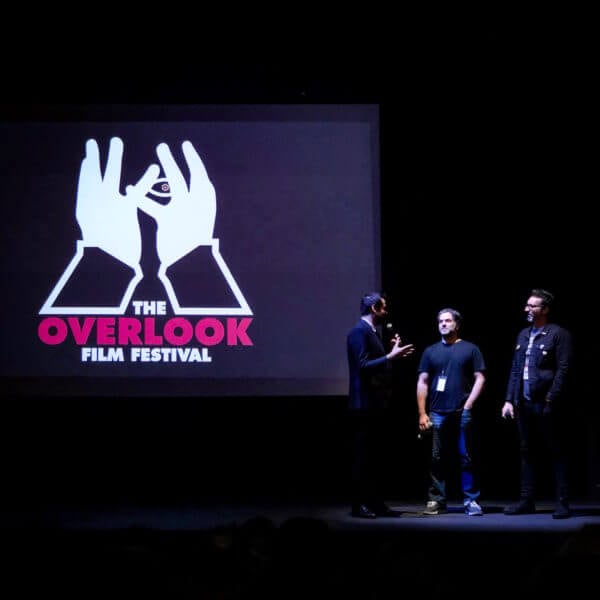 The festival’s opening night film “Unfriended: Dark Web” is a fun screen-based thriller that dispenses with the supernatural elements of its predecessor in favor of an entirely too believable sequence of events that turn from a silly online hangout of friends to a dark and twisted trip into the seedier sides of the Internet. For anyone who has spent all too much time digitally socializing on a computer, it’s definitely worth a watch. 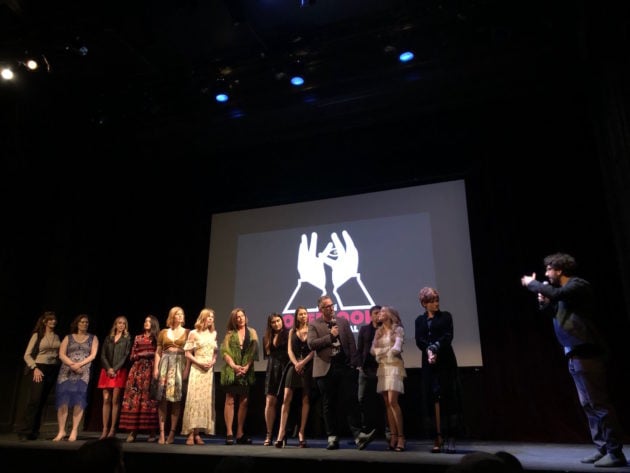 For those who have become attached to the weird world of Darren Lynn Bousman’s Tension Experience (and subsequent Lust Experience), Overlook was also an opportunity to see his new film “St. Agatha” which actually starred many of the cast members from Tension, who were in the audience for this world premiere. The film itself was easily overshadowed by Tension’s prior excitement, serving up some shocking moments while mostly meandering through some winding drama.

Each day at Overlook Film Festival brought new surprises and, coupled with the opportunity to explore the always-exciting city of New Orleans, truly left every attendee fulfilled and utterly exhausted. Though it hasn’t been officially stated, plans are for the festival to return to New Orleans next year with even more cinematic and immersive fun.

For a more in-depth look at the Overlook Film Festival and its immersive experiences, read more of my writings at No Proscenium.