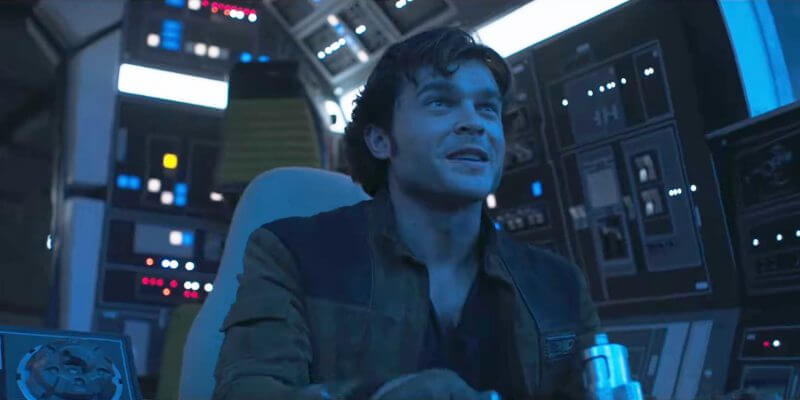 The second stand-alone Star Wars spinoff movie “Solo: A Star Wars Story” is coming up quick. We’ll be able to see the film in theaters about a month and a half from now, but in the meantime Lucasfilm has released the first full-length trailer for the highly-anticipated Han Solo origin story from director Ron Howard— after two teaser trailers premiered with the Super Bowl back in February.

Continuing the tradition of over-analysis that accompanies any Star Wars marketing release, I’ve taken the time to go through and screen-capture every single shot (totaling a whopping one hundred and twenty-three) from this new trailer, with an eye out for locations, characters, and plot details it might be easy to miss on a first time through. Join me as we go shot-by-shot and continue to count down the wait for “Solo: A Star Wars Story”!

SHOT #1 – A sweeping bird’s-eye-view of what I now understand to be Corellia at night.

SHOT #2 – The underside of an Imperial Star Destroyer under construction in the Corellian shipyards. We hear the familair roar of a TIE Fighter, and a rat-like creature scurries across a wire.

SHOT #3 – The silhouette of Han Solo (Alden Ehrenreich) approaches a seedy-looking location under the cover of darkness. Three men warm themselves by a fire nearby.

SHOT #4 – We see Han’s fan through slats in a doorway. This shot is repeated from one of the earlier teaser trailers.

Qi’Ra: “You’re after something.”

SHOT #6 – Han’s waist and holstered blaster step into frame, with the gang in the background

SHOT #8 – Han stares down the gang. It looks as though Chewbacca is standing next to him.

SHOT #10 – Another shot from behind as Han approaches a table in a gambling den, surrounded by aliens. Lando (Donald Glover) is in the center, framed between Han’s legs.

SHOT #11 – Lando looks up as all the aliens and other unsavory types turn to see Han approaching.

SHOT #12 – Han gestures toward a seat at the table as though he’s asking if it’s available.

SHOT #13 – Han’s hands push a pile of chips into the center of the table, suggesting he’s going “all in.”

SHOT #15 – Han and Chewbacca (Joonas Suotamo) look up at the underside and cockpit of the Millennium Falcon.

SHOT #17 – We see Qi’Ra (Emilia Clarke) talking with Han in a fancy nightclub.

SHOT #18 – Qi’Ra walks away, and Han follows. We see a group of partiers in the backround.

Qi’Ra: “Little rough around the edges.”

SHOT #20 – Chewbacca follows Qi’Ra and Han through a desert or sandy cliffside area. Chewie is carrying some sort of cases.

SHOT #21 – Tobias Beckett (Woody Harrelson) meets with Han among some ruins. Another shot we’ve seen before.

Beckett: “Heard about a job.”

SHOT #22 – Medium shot on Beckett from the same scene.

SHOT #23 – We see Paul Bettany’s character Dryden Vos for the first time, standing on an elevated platform in what looks like the same nightclub from earlier, surrounded by partygoers.

SHOT #24 – Medium shot of Vos. We can now make out the scars or deformations on his face.

Beckett: “Putting together a crew.”

SHOT #25 – Han drives his speeder alone through the streets of Corellia.

SHOT #26 – A low-angle shot from street level that tilts up as Han’s speeder races past overhead.

SHOT #27 – Han talks about his qualifications with what looks like an Imperial officer.

SHOT #28 – Han’s forearm throws a gear shift in his speeder.

SHOT #32 – Part of a shot from the speeder chase scene we saw in a previous trailer.

SHOT #33 – A ship airlifts a cargo container in a snowy mountainous area as several drones follow on its tail.

SHOT #34 – Han wrestles with the controls of the ship from the same sequence.

SHOT #35 – The same ship escapes an explosion among the mountains.

Han: “I’ve waited a long time for a shot like this.”

SHOT #36 – Han talks with his crew in what looks to be a makeshift campsite.

SHOT #37 – Val (Thandie Newton) readies her weapon at the campsite.

SHOT #38 – Beckett kisses a familiar-looking blaster before tossing it to Han.

SHOT #39 – Han smiles as he catches the blaster.

SHOT #40 – Han and Chewbacca discuss the situation in what looks like the gambling den from earlier.

SHOT #41 – Han, Qi’Ra, and Chewbacca approach a large hideout built into the side of the snowy mountains. A huge-tusked skull decorates the entranceway. This might be the exterior of the gambling den if we didn’t see it in that alleyway earlier.

SHOT #42 – The group walks past the bar in the gambling den.

SHOT #43 – Three-shot on Qi’Ra, Chewbacca, and Han as they look around the gambling den.

Qi’Ra: “He’s the best smuggler around.”

SHOT #47 – Reverse of Lando at the Sabacc table. He’s having his drink refilled by a spherical, hovering droid.

Lando: “Everything you’ve heard about me is true.”

SHOT #48 – Chewbacca laughs, but he has a somewhat pained expression on his face.

SHOT #49 – A shot from behind as Han and Qi’Ra walk through the gambling den and approach a glowing orange light. It sounds like a scuffle is going on.

SHOT #50 – Lando’s droid L3-37 (Phoebe Waller-Bridge) backs a bar patron up against a wall, letting out a grunt.

SHOT #52 – Medium shot of Lando, looking almost sage-like. Chewbacca, Han, and other bar patrons are in the background.

SHOT #56 – Han reaches out to touch the undercarriage of the Millennium Falcon for what must be the first time.

SHOT #57 – A bird’s-eye shot of the Falcon with its very different blue detailing and extended-nose look as it sits on the landing platform surrounded by lights.

SHOT #59 – Medium shot on Han as he steps foot into the Millennium Falcon’s cockpit for what is also presumably the very first time.

SHOT #60 – More of Han and Chewbacca in one of their meetings with Beckett.

Beckett: “If you come with us, you’re in this life for good.”

SHOT #62 – The Millennium Falcon’s rear repulsors fire up, turning from red to white.

SHOT #63 – Inside the Falcon’s cockpit: Lando is in the pilot’s seat with L3-37 as his copilot. Lando looks back at Han standing behind him.

SHOT #65 – Han kind of rolls his eyes as he moves toward a seat.

SHOT #66 – Over-the-shoulder view from the cockpit as Lando sends the Millennium Falcon into hyperspace. Han is now seated behind L3-37.

SHOT #68 – A sweeping helicopter shot through the snowy mountains as we approach the train heist sequence.

SHOT #69 – The Range Trooper’s magnetic boots clank down onto the top of the train.

SHOT #70 – Three Range Troopers fire at an unseen target from their perches atop the train.

SHOT #72 – Beckett fires back at the Range Troopers.

SHOT #73 – A Range Trooper takes a hit from Beckett’s blaster.

SHOT #74 – The train rockets along its track as the ship we saw Han piloting earlier follows close behind.

Beckett: “Let me give you some advice.”

SHOT #75 – The train twists around a sharp corner along its track.

SHOT #76 – The Millennium Falcon flies through a cloudy airspace.

Beckett: “Assume everyone will betray you.”

SHOT #77 – A reverse shot from the front as the Falcon continues along its path.

SHOT #78 – Another repeated shot: Qi’Ra and L3-37 come down off the Falcon’s ramp on a misty planet.

SHOT #79 – Standing next to the Falcon in the same scene, Lando raises his blaster to fire at an off-screen target.

SHOT #80 – A two-legged Imperial Walker drops down among some soldiers. What’s a Star Wars movie without a little war?

SHOT #81 – Val fires what looks like a grappling weapon attached to a length of rope, possibly during the train heist.

Beckett: “And you will never be disappointed.”

SHOT #82 – Beckett readies a weapon while aboard a ship or in a base of some kind.

SHOT #83 – Chewbacca embraces a second Wookiee while standing under the Falcon. Could this be Chewie’s wife Malla appearing for the first time in a canon Star Wars movie?

SHOT #84 – The Falcon attempts what is assumed to be the Kessel Run through giant tentacles, in another shot we’ve seen before.

Han: “I got a really good feeling about this.”

SHOT #85 – We see Han is now piloting the Falcon. His line is an obvious play on one of Star Wars’ consistent catch phrases.

SHOT #86 – TIE Fighters scream through the sky, and one of them fires a pair of green blaster bolts. In the background we can see an Imperial Star Destroyer.

SHOT #88 – The Falcon’s lower turret cannon blasts a TIE Fighter out of the sky.

SHOT #89 – More from this same chase sequence, as a TIE Fighter fires back on the Falcon while dodging some nearby asteroids.

SHOT #90 – Chewbacca growls frustratedly, and gets up from his seat in the Falcon’s cockpit.

SHOT #91 – Chewbacca flips a lever on the cockpit ceiling.

Han: “Since when do you know how to fly?”

SHOT #92 – Qi’Ra, Chewbacca, and Han are in the Falcon’s cockpit during this daring chase.

SHOT #94 – Medium shot on Chewbacca only as he barks something to Han.

SHOT #95 – Han looks back at Chewbacca from his pilot’s seat.

SHOT #96 – Chewbacca murmurs back a confirmation. Han continues to grapple with the Falcon’s controls as the two converse.

SHOT #97 – The Millennium Falcon swirls around a tunnel of clouds as it approaches an Imperial Star Destroyer coming through the center of the storm.

SHOT #98 – Medium shot of Qi’Ra, still in the copilot seat, as she holds on for dear life.

SHOT #103 – The Millennium Falcon zooms through the clouds before being boosted into hyperspace.

SHOT #104 – The Falcon flies above the desert and what appears to be the Cloud Rider gang’s camp.

SHOT #107 – Vos’s whip slices through some kind of fixture in the nightclub location from earlier.

SHOT #108 – A soldier leaps over some battlefield debris. Fires burn all around.

SHOT #109 – A group of figures fire blasts into the fray.

SHOT #110 – Chewbacca enters Wookiee rage mode and grabs one of the combatants by his shoulders, lifting him up into the air.

SHOT #111 – Chewie slams the soldier down onto the ground below headfirst.

SHOT #112 – Next to the Falcon, Qi’Ra tosses a grenade of some kind– possibly a thermal detonator.

SHOT #113 – We see the results of the tossed grenade, as explosions go off amid the battle.

SHOT #114 – L3-37 runs through the mayhem while raising her fist triumphantly in the air.

SHOT #115 – Back at the heist sequence, the train twists along its elevated track.

SHOT #116 – Chewbacca begins to fall from the train’s entrance platform as it turns. Han reaches out to grab him.

SHOT #117 – Han gets ahold of Chewie’s hand, preventing a fall to his death.

SHOT #118 – Chewbacca dangles from Han’s grasp as the snowy rocks race by below.

SHOT #119 – Reverse shot as Han struggles with all his might to save his Wookiee friend.

SHOT #120 – Chewbacca looks to see what’s coming down the tracks as he tries to right himself.

SHOT #121 – Chewie’s point-of-view of a rocky outcropping rushing toward him underneath the train. Can he possibly survive?

Comments Off on “I’ve got a really good feeling about this…” Shot-by-shot with the new “Solo: A Star Wars Story” trailer