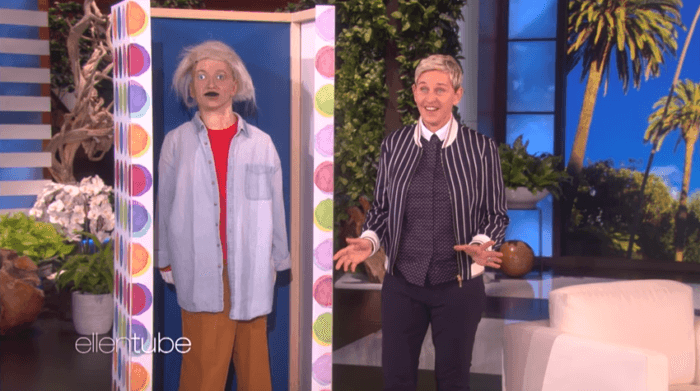 Profiles in History has announced the animatronic figure of Ellen DeGeneres from Ellen’s Energy Adventure at Epcot is going up for auction at their upcoming Animation & Disneyana Auction on May 5 in Los Angeles.

After the attraction closed in 2017, Ellen declared on her daytime talk show that she wanted her robot back. For her birthday, Ellen was surprised with the very item that is offered here. The video of her horrified reaction went viral.

WATCH – ELLEN COMES FACE TO FACE WITH HER ANIMATRONIC:

The head and costume from the infamous animatronic will be auctioned off and are estimated to sell for $3,000 – $5,000.

Also up for auction are an original set of blueprints for “Walt Disney’s Riverfront Square”, an unrealized Disney theme park intended for St. Louis. It’s a Disneyland that never was! In March 1963, Walt Disney met with the mayor of St. Louis to discuss plans for construction of a new theme park in the riverfront area of St. Louis.

Disney had his Imagineers draw up plans and design new attractions for the proposed park, but plans for the park fell through. Several classic Disneyland attractions were originally conceived for the St. Louis park, including what would later become Pirates of the Caribbean, The Haunted Mansion, and Big Thunder Mountain Railroad. One of only two sets of plans known to exist is expected to sell for $2,000 – $4,000.

Other highlights at the upcoming auction include a fully functional, remote controlled R2-D2. From 2004 until its retirement in 2014, this R2-D2 was used throughout Walt Disney World. It makes 53 different sounds from the original Star Wars trilogy, and features working fiber optic lights. It is estimated to sell for $100,000 – $200,000.

A wide variety of Disney animation art including key set ups from the Cinderella Ballroom scene for $15,000 – $25,000 and the Lady and the Tramp “Bella Nolte” scene for $35,000 – $40,000 will also be included in the auction. Other animation includes Keith Haring Sesame Street art for $1,500 – $2,500. Additionally, it will include rare, one-of-a-kind drawings and comic strip art by legends Dr. Seuss and Charles Schulz.

The Profiles in History Animation & Disneyana Auction will be held on May 5 in Los Angeles. For more information, visit their official website.