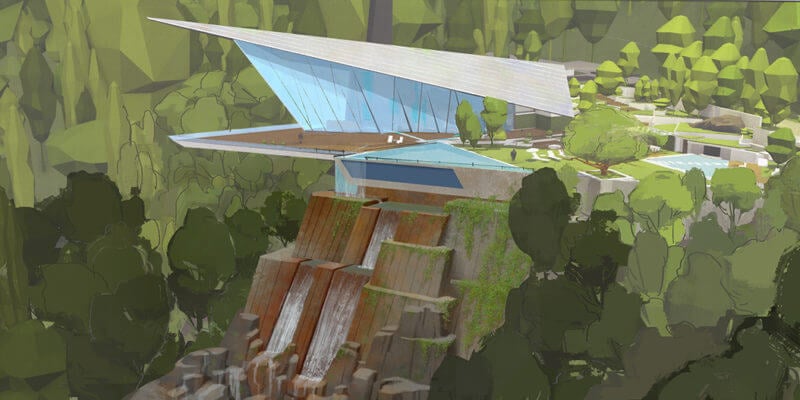 Pixar Animation Studios creates amazing worlds for their movies, and the upcoming “Incredibles 2” is no different. This concept art gives us a glimpse at new locations in “Incredibles 2” ahead of its June 15 theatrical release.

As fans know, the Parr family home was destroyed at the end of “The Incredibles.” For the sequel, the family gets a stylish new mid-century modern home. After spending some time in a cramped motel at the start of the movie, the Parrs move into this beautiful house:

“It’s easy to find colors and textures, palettes that are specific to mid-century design, so we just picked up on those and used them throughout the film,” said Bryn Imagire, the film’s Art Director.

The first house designed for the new movie was around 2,300 square feet, but the story required bigger digs for the Parr family. So, the team made some changes and the new home is now 20,000 square feet.

The work of architects like Frank Lloyd Wright and photographers like Ezra Stoller served as inspiration for the home’s design. The team also visited Palm Springs, California, which is filled with mid-century modern design.

Production Designer Ralph Eggleston calls Municiberg’s look “mid-century mundane.” To build the city for the new movie, the team referred back to original artwork from the first film. The team built an animated 3D model of Municiberg, adding details like cars, parking meters, and signs, over time.

The Sets Department, supervised by Nathan Fariss, was responsible for lots of little details. For example, they added texture to fabrics and objects, made marble shiny, and made lines less straight. “In the world of ‘The Incredibles,’ this is a very subtle thing, because mid-century design is all about straight lines, broad shapes,” said Fariss. “It’s not about wiggly things and a lot of crunchy detail.”

You can see the new Parr home and Municiberg in action when Disney-Pixar’s “Incredibles 2” arrives in theaters on June 15!