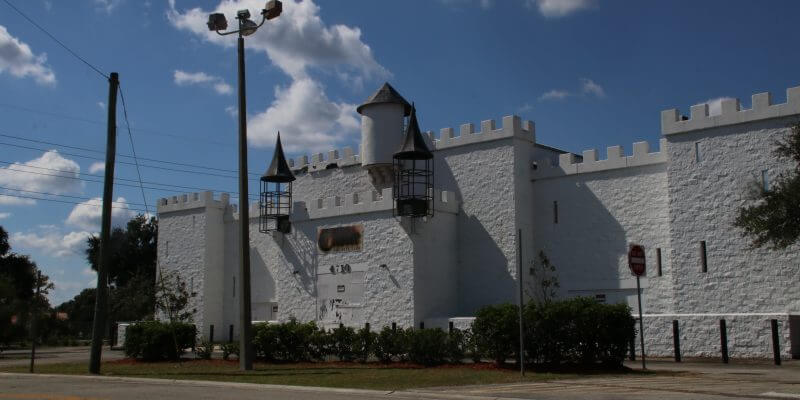 Located at Mile Marker 13 on US-192, in Kissimmee Florida, rests an ominous abandoned castle.  Located just up the street from its much more famous namesake, the Haunted Mansion remains a mystery today.

This warehouse with a looming grey castle façade was once a haunted attraction along the tourist centered Irlo Bronson Memorial Highway (US 192) near the Walt Disney World Resort.  Little information on this spook house and oddity museum exists today, but I did manage to dig up some fiendishly fun dirt to share with our ITM audience. According to state files, “Haunted Mansion Incorporated” was formed in March of 1997.  The last corporate was filed only two years later on September 24, 1999. In addition to company offices, the official address for this endeavor was 4710 West Irlo Bronson Memorial Highway, Kissimmee, FL, 34746. The Haunted Mansion opened just in time for Halloween 1997.  The former T-Shirt shop was transformed into the appearance of medieval castle for the new haunted attraction. Founded by former Ohio resident Tom Goddard, the giant building was home to an eerie oddity museum, gift shop with a host of horror masks, and an arcade.  Plans for additional amusements like a haunt themed ride never materialized. As for the haunt: “The rooms are original creations. The handicapped-accessible halls to the different rooms are dark and full of surprises. I don’t want to give away all the mansion’s secrets but the ”Black Hole” will make your head spin and have you doubting your senses. And classic horror fans will enjoy an encounter with Frankenstein’s monster.” – Tom Goddard as told to the Orlando Sentinel in 1997

Those fortunate enough to enter the creepy castle would have also found unusual items like human skeletons, a mummified human dwarf, a casket from the TV show “Dark Shadows,” 1880’s funeral coach, shrunken heads and other pickled punks.  The entire collection was said to have a $1 million value. When the “Haunted Mansion” was open, guests could expect to pay a mere $9 for frights ($3 less if under age 12) or $5 if entering during the day. Surviving a walk through the haunted house would take about twenty minutes with survival realized upon entering the gift shop at the maze’s exit.

All Good Things Come to an End

It’s not known why the Haunted Mansion closed but there were two other independent haunted attractions operating at the same time: Skull Kingdom (on International Drive) and Haunted Grimm House (just up the street as part of the Old Town amusement and shopping complex), which are also now long gone. The building has also been used as a nightclub and is alleged to be haunted (possibly due to the electric chair that was once part of the Haunted Mansion’s collection).  Today only the empty building and its castle façade remain to haunt mile marker 13 on US 192. UPDATE: (5/4/18) – ITM was informed that Reborn Christian Academy has taken up residence in the former haunted attraction.  At the time images for this story were photographed, the building was still showing for sale. The school does not list an opening date on their Facebook page (the only online presence we found for it). Our apologies to the school for missing this.