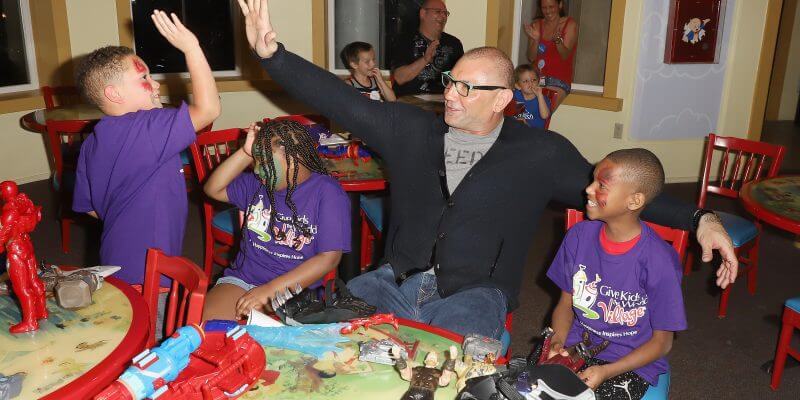 As part of the Marvel: The Universe Unites campaign, “Guardians of the Galaxy” star Dave Baustista made a surprise appearance at Give Kids the World Village in Kissimmee, Florida.

Marvel’s current charity campaign coincides with the release of new toys and merchandise for “Avengers: Infinity War,” which will feature Bautista alongside the other Guardians. The star-studded cast is using their combined superpowers to raise funds and awareness for charities like Give Kids the World.

During his visit, Bautista interacted with children and delivered new toys from “Avengers: Infinity War,” including his new film-inspired Drax action figure. Hasbro donated $1 million US worth of cash and products to Give Kids the World, which fulfills the wishes of children with critical illnesses and their families by providing them with an unforgettable trip that includes a visit to their village in Central Florida and access to Walt Disney World Resort.

“Being here is such an honor, and to have the opportunity to spend time with the children and amazing staff of Give Kids The World who make it all happen is incredible. Hasbro’s donation will provide the gift of play and bring tremendous joy to the many children who visit,” Bautista said.

Stayed tuned for more from Marvel: The Universe Unites, which culminates on March 3 with the launch of “Avengers: Infinity War” products.

Comments Off on PHOTOS: “Guardians of the Galaxy” star Dave Bautista makes surprise appearance at Give Kids the World