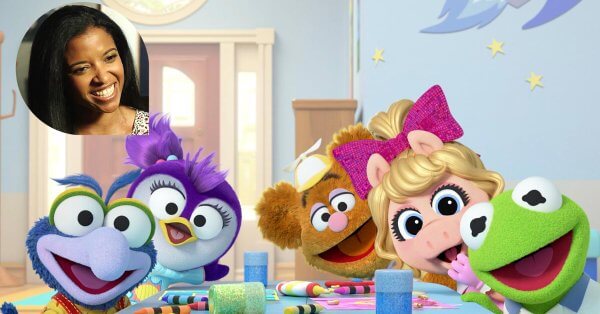 “When your room looks kinda weird, and you wish that you weren’t there…” The original theme song for the animated Jim Henson series “Muppet Babies” is almost as iconic as the characters of Kermit, Piggy, Fozzie, and Gonzo themselves. When it was announced that “Muppet Babies” would be rebooted for a whole new generation of kids on Disney Junior, we Muppet fans couldn’t help but wonder what the new opening title sequence would sound like.

Today Entertainment Weekly revealed the voice behind a fresh take on the song that I couldn’t get out of my head between the ages of 4 and 11: Renée Elise Goldsberry, most famous for playing Angelica Schuyler in the original cast of Lin-Manuel Miranda’s smash historical Broadway musical “Hamilton.” In the video below, Goldsberry describes her excitement and having the opportunity to record such an influential tune.

Renée Elise Goldsberry is also known for her Broadway roles in “The Color Purple,” “Rent,” and as Nala in “The Lion King.” And while this take on the “Muppet Babies” theme song certainly sounds similar to the one we know and love from the original 80s run of the cartoon, there are some noticeable changes in the lyrics. We’ll have to tune in when the show debuts to hear the full new version.

The “Muppet Babies” reboot will premiere on Disney Junior this March.

Comments Off on VIDEO: New “Muppet Babies” theme song to be performed by “Hamilton’s” Angelica Schuyler