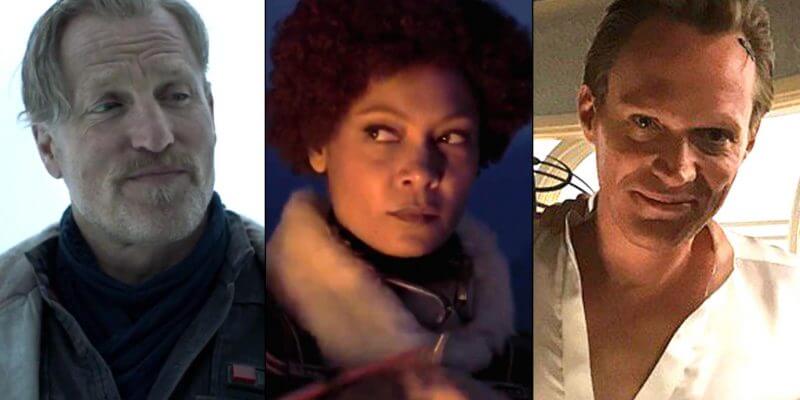 We’ve been learning more about the characters of “Solo: A Star Wars Story” this week thanks to Entertainment Weekly, and today new details about the trio of galactic criminals were revealed.

Han Solo’s origin story explores how Han became the charming pilot we all know and love today, and these three outlaws have a role to play in his early days. Beckett is a charismatic criminal and mentor to Han Solo, and though he’s tough he does have a soft spot. Lawrence Kasdan says, “He is a very tough criminal. And, as you might think with Woody, who has enormous humanity, it’s not just that.”

Lawrence and his son Jon Kasdan, who co-wrote the script, based Beckett and Han’s mentor/apprentice relationship on Long John Silver and Jim Hawkins from Robert Louis Stevenson’s “Treasure Island.”

“Han sort of forces himself into Woody’s life,” Lawrence Kasdan says. “It starts a relationship that has enormous impact on what kind of person Han will be.”

Val is still a mysterious character, but we do know three things: she’s Beckett’s partner, she carries an enormous blaster, and she doesn’t trust Han.

“She’s a little skeptical of this kid when she meets him. And her relationship with him goes in, I think, an…interesting direction,” says Jon Kasdan. Dryden Vos is a successful crime boss who loves breaking the rules but has others do the dirty work for him.

“It’s a sort of combination of class and swagger and real danger which I think is a fun thing, and he absolutely inhabits it,” says Jon Kasdan. “He’s way deeper in the crime world than anyone else that we meet in the movie.”

The role of Dryden Vos was originally going to be played by Michael K. Williams (“The Wire,” “Boardwalk Empire”), but when shooting was extended due to the director shake-up, scheduling conflicts meant he had to be replaced.

Also, despite sharing a name with Quinlan Vos (a Jedi featured in “The Clone Wars” and in the background of “The Phantom Menace”), Lucasfilm says they are not related.

Comments Off on “Solo: A Star Wars Story” screenwriters reveal more about the movie’s trio of shady characters