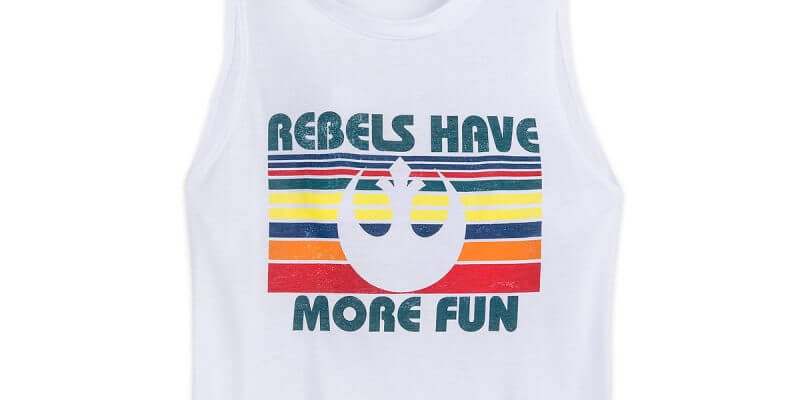 shopDisney has a massive selection of Disney, Pixar, Star Wars, Marvel, and Disney Parks merchandise and new items are added every day. We’ve collected a few of the hottest items that just arrived at the shopDisney store and these 5 Star Wars tops are out of this world. Don’t head into Tosche Station before you pick up this Luke Skywalker Ringer T-Shirt ($34.99). This tee features a distressed design with screen art of Luke Skywalker holding his lightsaber. Get ready to have a good time in this “Rebels Have More Fun” Tank ($24.95). Featuring a colorful striped design and the iconic symbol of the Rebel Alliance, this tank is far more stylish than any imperial uniform. The light side and the dark side clash on this Luke Skywalker and Darth Vader T-Shirt ($34.99). This short sleeve Men’s tee features screen art of the iconic hero-villain duo as well as Galactic Empire and Alliance Starbird symbols on each sleeve and “77” signifying the year “Star Wars” made its theatrical debut. Somehow, Darth Vader’s menacing quote doesn’t seem so bad on this “Rule the Galaxy” Tank Top ($22.95). This sheer heathered jersey knit tank puts a playful spin on the iconic villain’s line, even going as far as to put a little heart on top of the Galactic Empire symbol.