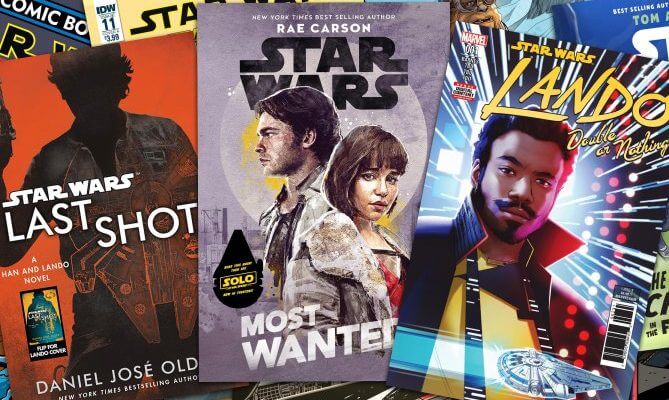 Lucasfilm has revealed an exciting new line of books and novels inspired by “Solo: a Star Wars Story,” just a few short months ahead of the film’s highly-anticipated theatrical release.

This new collection will have something for Star Wars fans of all ages, from novels for adults to activity books for children. The collection includes: This novel focuses on Han Solo and Lando Calrissian in three different eras of Star Wars lore. It begins with Lando before the events of “Solo,” before shifting focus to Han and Chewie between the events of “Solo” and “A New Hope.” Finally, it ends with Han, Leia, Lando and even a young Ben Solo after the events of “Return of the Jedi.” The book features a dual cover with Han on one side and Lando on the other.

“Most Wanted” by Rae Carson This Young Adult book focuses on an even younger version of Han and Qi’ra that we will get to know in “Solo.” This will provide some insight into their relationship and how they got to where they are, when we seen them in the upcoming movie.

“Lando: Double or Nothing” by Rodney Barnes This new Marvel Comic series will consist of five issues and will focus on Lando and his droid companion L3-37 just before the events of “Solo.”

The collection will also include several books dedicated to the art and the making of the movie, as well as several children’s books, comic books and activity books. No release dates have been provided yet for the books, but you can see young Han Solo in action when “Solo: A Star Wars Story” hits theaters May 25.

Comments Off on Lucasfilm unveils new line of books and novels based on “Solo: A Star Wars Story”