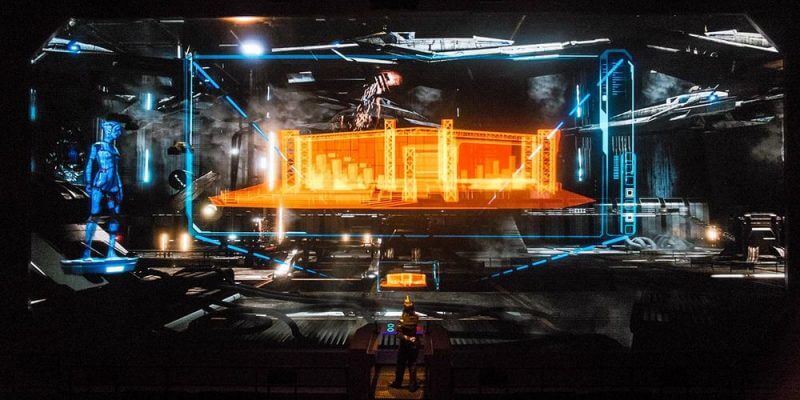 Three-dimensional (or stereoscopic) cinema technology has been around in some form or another for a full century, but there have been three major booms in the development of 3D: first in the 1950s, when the trend first went mainstream, second in the 1980s when theme parks and IMAX theaters began to make high-profile use of the process, and finally about a decade ago after James Cameron’s mega-hit movie “Avatar” helped convince moviegoers that 3D might be a viable form of filmmaking for the 21st century.

Since then, it seems excitement for 3D moviegoing has died down quite a bit. It’s not uncommon to hear audience members claim to dislike 3D, or even disregard for the process for a variety of reasons from filmmakers themselves. But at this very moment one enterprising tech company based out of Los Angeles, California is working to make 3D the future once again– not just in movie theaters, but in the concert and theme park worlds as well.

This week I paid a visit to 3D Live’s demo space in Downtown L.A. to get an up-close-and-personal look at the impressive work they’re doing, and had a chance to speak with the company’s enthusiastic founders and officers.

3D Live’s official website describes the company as follows: “As creative technologists with a history of groundbreaking projects in ‘holographic’ 3D LED, VR/AR and Mixed Reality, we are uniquely positioned to help companies better understand the past present and future of entertainment tools.” The demonstration I was given showed off all of these applications with the help of a wall-sized LED screen mounted against the rear wall of a large industrial warehouse-type building transformed into a creative arts studio.

“Live entertainment concerts [have] really been the core of the business over the last five or six years, and now we’re very actively moving into the theme park space, as well,” Christian Dieckmann, 3D Live’s Chief Strategy Officer told me. “We did an attraction with Cedar Fair Entertainment at California’s Great America park [that] opened in 2016– ‘Mass Effect: New Earth.’ [It utilizes] a large, 60 by 30-foot screen. It won USA Today’s Top 10 Attractions of 2016 Award.”

“Because [the LED screen is] emissive, interaction with a live performer works [fantastically.] There’s a live performer who’s curating the experience and dodging under 3D objects and it looks like they’re [all] in the same physical space. You can’t really do that with projection.

WATCH INSIDE THE TECHNOLOGY OF “MASS EFFECT – NEW EARTH” AT GREAT AMERICA:

“We [also] recently won a THEA Award, not specifically for that attraction but for this new technology as it relates to the theme park industry. So the technology is out there, it’s winning awards and we’re focused on the future.” At that point I noticed the 3D glasses I was wearing were identical to the ones you might be handed when visiting your local AMC. “[You wear] standard, 3D polarized glasses like you’d use in a movie theater or theme park attraction,” Dieckmann confirmed. “There’s nothing special in the glasses. It’s really all in the hardware of the LED [screen] itself.”

“We’re working with polarized light as opposed to doing any kind of chromatic light cancellation,” added Nathan Huber, CEO and Founder of 3D Live. “By using polarizers, you can have live performer interaction and not deal with any weird color offsets based on what the people are wearing. You can have them interact in the visual experience, and also because it’s an emissive display you don’t have to deal with cast shadows, you can introduce choreographed lighting and special effects without washing out the image.”

“The angle of view of the 3D is really far superior to that of projection, where you’re normally getting 35, 40 [degrees] at the best. With LED you can go 120, 140 degrees, both vertical and horizontal for your line of sight and being able to perceive stereo. Also your stereo contrast ratio is vastly increased using LED, meaning you can have greater separation in having a comfortable viewing experience where something really feels like it’s living in the same space as you. Also your contrast ratios go way up, whereas [with] projection you’re never going to be able to project black. In the history of cinema, there hasn’t been a true black.”

“Now [with this technology] you get that same contrast space that we have in real life, so performers standing there have a certain shadow space, and they can share that same shadow space with the virtual objects that are out there. So that’s awesome. Your color, brightness, everything goes up so now you can really see a vibrant, brilliant image.”

Dieckmann continues relating the history of the company: “The first [concert] tour this company did was with Primus several years ago. We’ve done a lot in the electronic dance music space as well. Actually, the roots of this technology [were] originally developed for the [cancelled] Michael Jackson “This is It” tour, so this technology never saw the light of day.”

As for how their tech might find its way further into the themed entertainment world, Dieckmann is very optimistic. “We think there [are] huge applications for theme parks. Ultimately we see this as a superior display technology. Anything that’s got a projector in it, our goal is to now do that with LED. That’s the vision there. We think there’s big opportunity in the cinema space, too.”

Huber sums up what makes 3D Live so impressive: “It’s great for an audience to see their performer enveloped, immersed in a virtual world, and having him react with it, move with it, play with it. It’s a pretty stunning experience.” After witnessing what I saw during my half-hour visit to 3D Live, I have to say I agree with Mr. Huber. He and his partners showed me a several-minute-long eye-popping demo flaunting the basics of what their tech can accomplish, followed by an immersive mixed-reality VR game, and even a short clip from the 3D conversion of Steven Spielberg’s “Jurassic Park.” Each made it feel like I was looking through a huge window in a hyper-realistic virtual world.

As a confirmed 3D skeptic (I’ve never found the end result to be worth the extra cost, uncomfortable glasses, and headaches that come with consumer-level 3D), I found myself a true believer after experiencing this technology. It’s impossible to get across the immersive nature in words to those who haven’t seen it for themselves, but suffice it to say that 3D Live has found a way to make 3D not only bearable, but essential. I’m definitely looking forward to seeing whatever the company is cooking up next. For more information on 3D Live and its various projects and applications, be sure to visit the company’s official website.

Comments Off on INTERVIEW: How L.A.-based tech company 3D Live is making 3D the future (again)