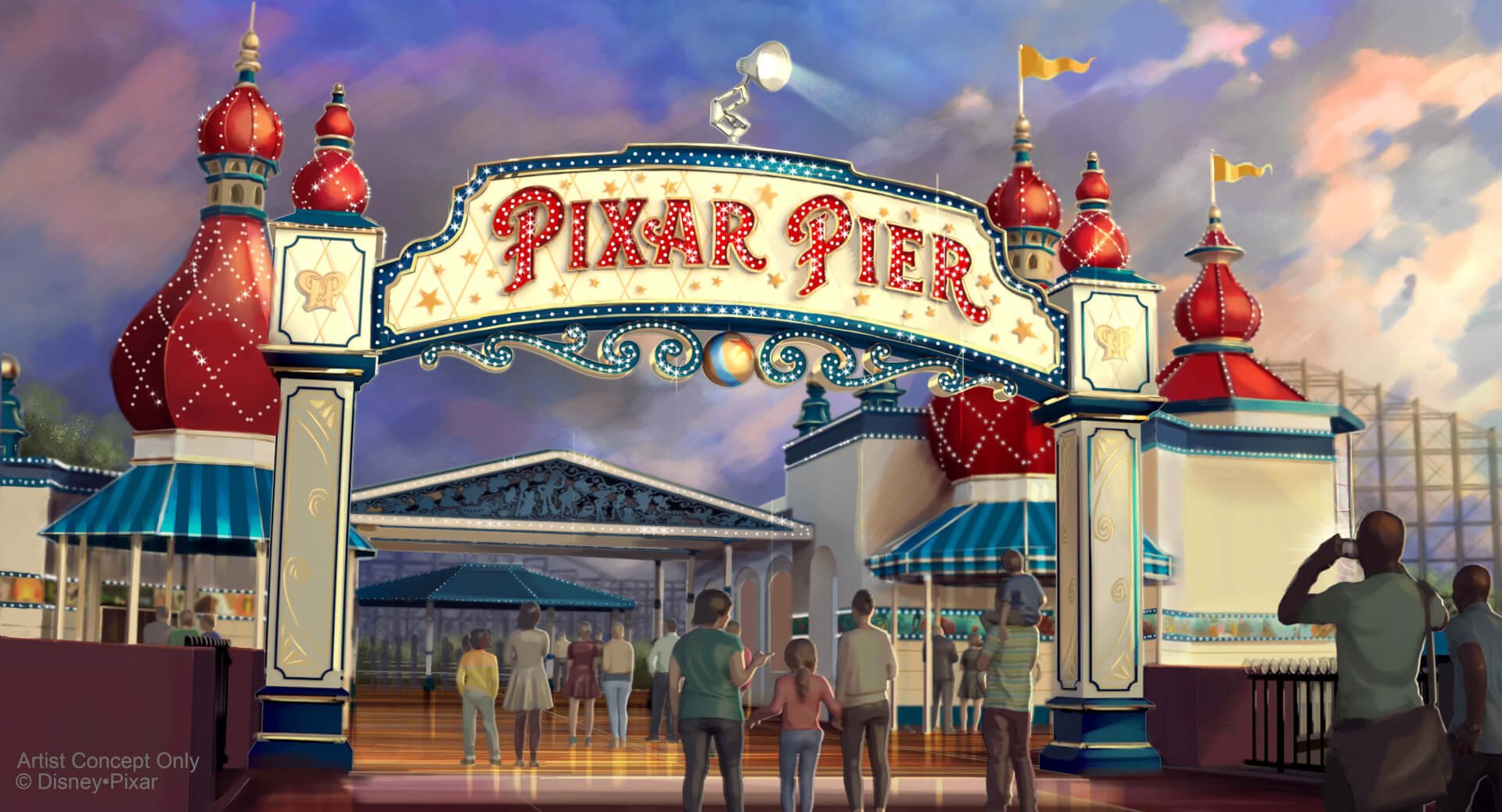 D23 Expo 2018 released new details of Pixar Pier opening at Disney California Adventure and info on other Pixar attractions coming to Disney parks around the world.

The D23 Expo has brought exciting announcements of new Disney theme parks, resorts, films and attractions since its beginning in 2009. And today Bob Chapek, Chairman of Walt Disney Parks & Resorts, presented several thrilling updates that all Disney fans will be excited to hear about. One special announcement was of all the ways Pixar will become a larger part of the Disney parks around the world. To kick off all of the Pixar excitement, it was announced that June 23 will be the official opening of the highly-anticipated Pixar Pier at Disney California Adventure. This will include the opening of the Incredicoaster and a future attraction themed to Disney•Pixar’s “Inside Out.” Guests enter Pixar Pier through the new marquee, pictured above, which will be topped with the iconic Pixar lamp later this year.

Fans also learned that a new Incredibles float will join Paint the Night this June. Mr. Incredible, Elastigirl, and Frozone will showcase their superhero awesomeness as they take on their newest threat, the Underminer. Violet, Dash, and Jack-Jack also showcase their unique powers in surprising new ways, as shown through dynamic and innovative visual technology.

Like the other elements in this spectacular parade, this new float will come to life through a series of dazzling LED lights, new music elements and high-tech, pop-art effects inspired by the mid-century-modern style of the films. The popular parade returns to the Disneyland Resort – this time to Disney California Adventure – when Pixar Fest launches on April 13. The first-ever Pixar Fest will allow guests to celebrate friendship and beyond during this limited-time event, bringing Pixar stories and characters to life like never before. At Disneyland, a new fireworks show, “Together Forever – A Pixar Nighttime Spectacular,” will debut with dazzling pyrotechnics, memorable music, and a heartwarming story.

A new film festival, Pixar Shorts, will also take place throughout much of Pixar Fest at Disney California Adventure. Pixar Shorts will feature rotating favorites including “For the Birds” and “LAVA” at the Sunset Showcase Theater in Hollywood Land.

The Paradise Gardens area at Disney California Adventure will also see new experiences during the fest, including performances by a new Pixar-themed musical troupe, Pixar character encounters, and special crafts and activities for younger guests.

Additionally, some exciting news for Disney’s Animal Kingdom: a new, family-friendly show will debut April 22, featuring Russell and Dug from Disney•Pixar’s “Up,” as they discover species of birds from around the world.

For 20 years, Pixar has entertained guests at Disney parks all over the world and all of these new additions to the parks will take this integration in the parks to new heights. More news from the Disney Parks and Resorts presentation at D23 Expo Japan 2018 coming very soon!