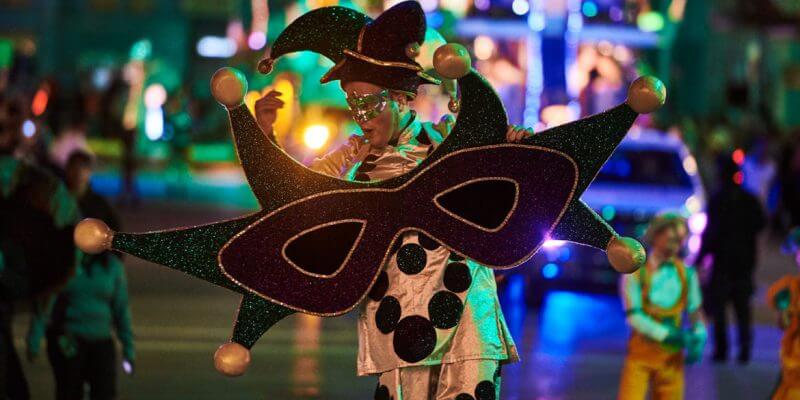 The New Orleans-themed event provides some of the most fun times you can have at Universal Studios Florida. After all, you know how the saying goes. Laissez les bons temps rouler! Let the good times roll!

The good times roll all over Universal Studios Florida in all kinds of different ways, providing fun experiences for everyone.

Here are five ways you can enjoy Mardi Gras at Universal Studios Florida:

5. Taking in the atmosphere on the streets!

From the moment you enter Universal Studios Florida during Mardi Gras, you know you’re in for a good time! Authentic New Orleans music fills the air and costumed performers roam the streets, wishing guests a happy Mardi Gras.

Authentic New Orleans bands perform and get everyone into the celebratory spirit, setting the mood for a night to remember.

On select nights of Universal’s Mardi Gras, some of your favorite performers will take the stage at the Music Plaza as part of the Mardi Gras concert series. You can cap off your night with an amazing concert at no extra cost! This year’s performers include Macklemore, The Beach Boys, 311 and more.

To see the full list of performers, check out the most recent announcements here. Of course, no special event would be complete without specially themed food and beverage. You can try out some of the delicious Cajun flavors at the French Quarter courtyard in the New York area of the park.

Some of the more popular items on the menu include Spicy Jambalaya, Voodoo Chicken, Beignets and more. My personal favorite is the Shrimp Po’boy. The centerpiece of the Mardi Gras celebration is the parade. Running every night for this year’s event, the parade features six new celestial-themed floats. The bright lights and vibrant colors make this nighttime show a spectacular one.

But of course, the best part of the parade is the beads. The people riding the floats toss beads out to the crowds of viewers. Be ready to catch some Mardi Gras beads to take home as your very own souvenirs!

And finally, the only thing better than watching the Mardi Gras parade is…

1. Being a part of the parade yourself! Those aforementioned people riding the floats aren’t employees or winners of some exclusive contest. They’re guests just like you and me!

Most nights, guests can head over to the “A Day in the Park with Barney” attraction to wait in a stand-by line to ride on the Mardi Gras Parade floats. Obviously, some nights will be busier than others so it’s never guaranteed that you will get to ride, but it sure is worth it to try.

It may seem like such a simple thing, but trust me, riding a parade float and throwing beads out to the crowds of people is easily the most fun you can have at Universal Orlando’s Mardi Gras.

Times for the parade vary depending on the night, so be sure to ask a team member when you should line up to get in the parade, or if it is even possible for that given night. What’s your favorite part of Universal Orlando’s Mardi Gras? Let us know in the comments below!