They predate Disney’s foray into full length animated feature films by eight years. Looking back at the 75 various “Silly Symphony” cartoons, they could be considered an experimental medium – a way to test new applications, style, story type, and color. However they’re spun, Silly Symphonies represent some of the best examples of Disney ingenuity. 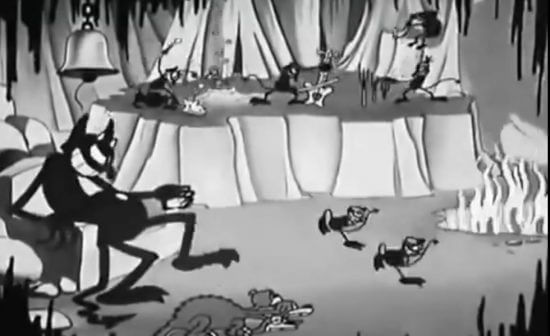 We all know that Walt Disney was way ahead of his time with many of his entertainment ventures. He and his studio have the distinct honor of being the first to produce a “talking” cartoon (“Steamboat Willie”),  full length animated feature (“Snow White and the Seven Dwarfs”) and the first stereo* cartoon (“Fantasia”).
* NOTE: the 8 channel release of “Fantasia” was a limited, touring engagement with Disney-supplied audio gear called “Fantasound.” The general release was shown with one channel audio. 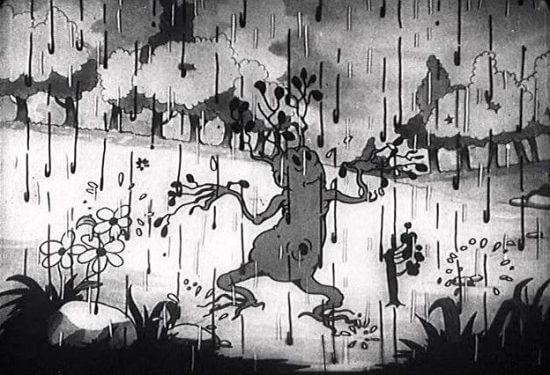 A closer look at the Silly Symphony shorts shows that they could be the inspiration for the modern music video. These early Disney cartoons were intended to be stand-alone features set to various pieces of music.

The first five of the Silly Symphony cartoons emerged in 1929. These early black and white animated features were distributed by Columbia Pictures. Looking back at these artistic accomplishments provides a refreshing reminder of how far animation has come and a wonderful example of Walt Disney’s delightful storytelling talents. 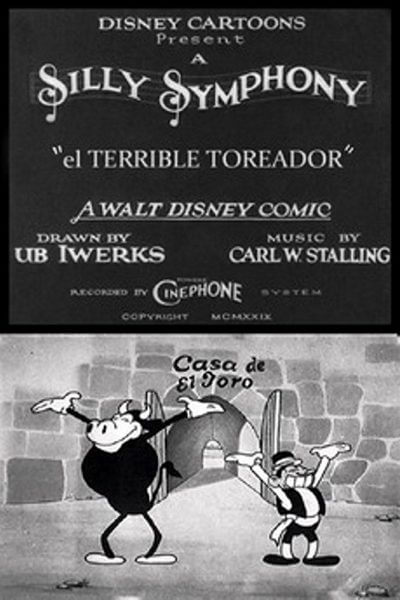 Less than a year after “Steamboat Willie” debuted, Walt Disney himself directed the first Silly Symphony. “The Skeleton Dance” crawled from out from the cemetery and onto screens on August 22, 1929. This five and a half minute long inaugural musical movie featured four frolicking skeletons dancing around a graveyard. Though believed to be a version of the “Danse Macabre,” “The March of the Trolls” was adapted for this film, according to Carl W. Stalling, who provided the music.  “Skeleton Dance” was animated by Ub Iwerks, Les Clark, and Wilfred Jackson.

September 26, 1929, saw the second in the Silly Symphony series come to life. “El Terrible Toreador” was directed by Walt Disney and animated by Ub Iwerks, Burt Gillett, Wilfred Jackson, Les Clark, Jack King, and Ben Sharpsteen. Carl W. Stalling’s music for the six minute and fourteen seconds long cartoon was derived from the opera “Carmen.” As announced in the titles (Toreador = bullfighter) the cartoon depicts the dance of bull and fighter.

Ub Iwerks stepped up to direct “Springtime,” the third of Disney’s Silly Symphonies (October 24, 1929). Like “El Terrible Toreador,” this entry into the series was six minutes and fourteen seconds long. It can be seen with Disney’s animated feature “101 Dalmatians.” Ub Iwerks directed Les Clark and Wilfred Jackson provided the animation and Carl W. Stalling, using music from “Dance of the Hours,” was the composer.

Walt Disney returned to direct the Devil and his demons for “Hells Bells” which was released on November 21, 1929. Carl W. Stalling’s use of “In the Hall of the Mountain King” and “Funeral March of a Marionette” complimented Ub Iwerks, Wilfred Jackson, and Les Clark’s animation.

December 19, 1929, saw the release of “The Merry Dwarfs.” Running five minutes and fifty-seven seconds long, this was also the final film for 1929 (for the Silly Symphony series). Ub Iwerks, Wilfred Jackson, Les Clark, Johnny Cannon and Jack Cutting animated the cartoon which was set to music by Carl W. Stalling.

The amount of talent, ingenuity and pure fun poured into these groundbreaking animated Silly Symphony shores stands up today. For example, “Skeleton Dance” is ranked number 18 out of the top 50 cartoons in the world. Make sure to check out the other parts of this wonderful animation gold mine known as the Silly Symphonies: Comments Off on Walt Disney’s Silly Symphonies: Year One – 1929