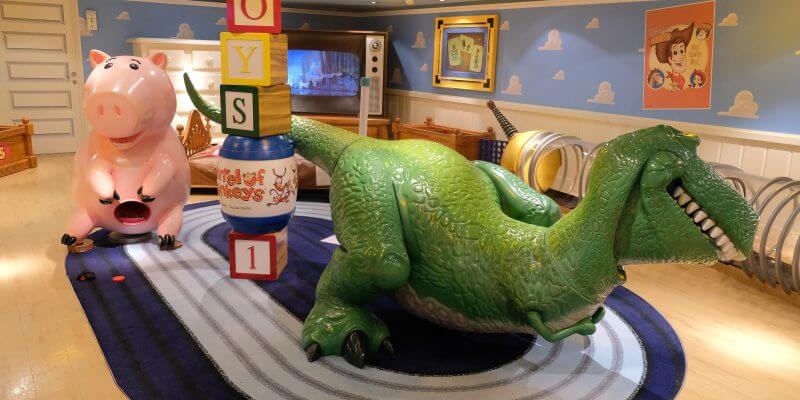 The Disney Dream is one of Disney Cruise Line’s newest ships, as it first started sailing the Caribbean back in 2011. Disney Dream is 40% larger than the two ships that came before it and features an array of different lounges, restaurants, and experiences for the whole family. The Oceaneer Club is one exciting and special area aboard the Dream designed specifically for kids.

This special club is full of pure Disney fantasy and features character-driven performances, special storytelling sessions, larger-than-life playgrounds, dress-up opportunities and cool interactive activities that are sure to delight not only tiny tots but also older kids as well. The club was designed to transport youngsters aged 3 to 12 to a Disney-themed land that will absorb any child for hours, giving adults the opportunity to experience the many exciting offerings found aboard the Dream on their own. For a special look at some of the programs and offerings from the club, be sure to check out the video below.

Upon entering the club, you can’t help but be overwhelmed by its night-like blue ceiling, which twinkles with a constellation of popular Disney Pals. Additionally, during the design process, the creators of the magical area constructed the rooms with lower ceilings. This design detail helps children feel at ease and welcomed into the space, which is more proportionate to their height.

This main area, which serves as a portal to the other lands found throughout the club also includes a state-of-the-art Magic PlayFloor. This special interactive floor isn’t only a cool design element as it also has a bunch of fun games for kids to enjoy in groups. 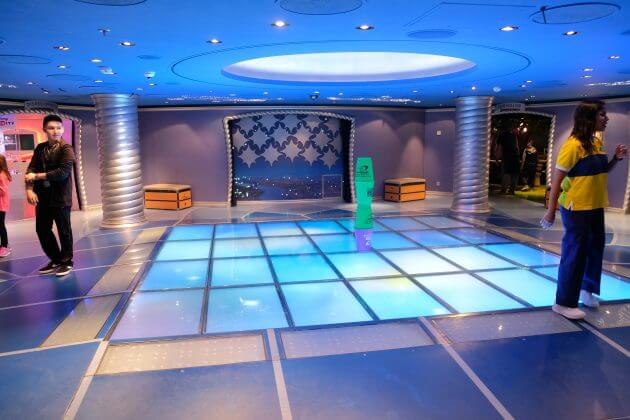 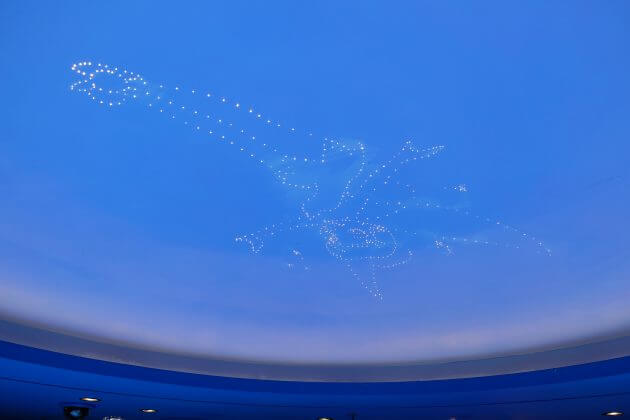 Also found in this main hub is a 103ʺ plasma screen where kids can watch movies and interact with Crush, the animated sea turtle from Disney·Pixar’s “Finding Nemo.” Crush actually chats with his audience in real time, asking questions about the kids themselves and their human world. 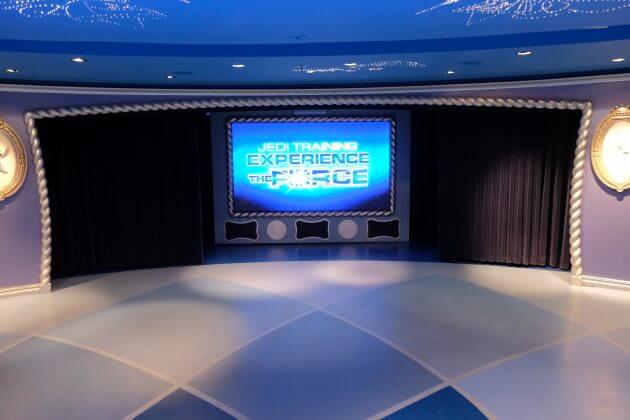 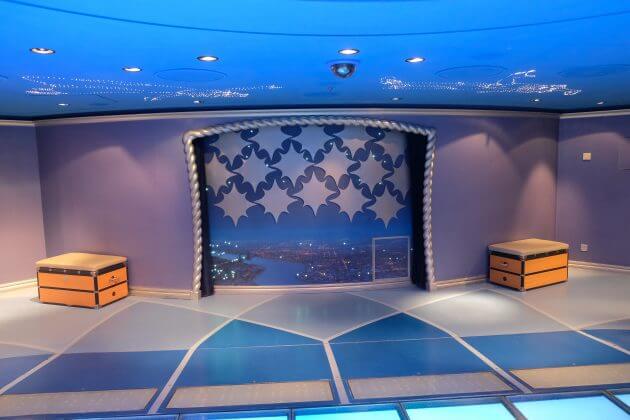 From this area, kids can transport into some of their favorite films. Andy’s Room, inspired by Disney·Pixar’s animated hit “Toy Story” films, features characters and toys from the original film. It also includes a Slinky Dog jungle gym for kids to climb through while enjoying fun activities that take place in the themed room. 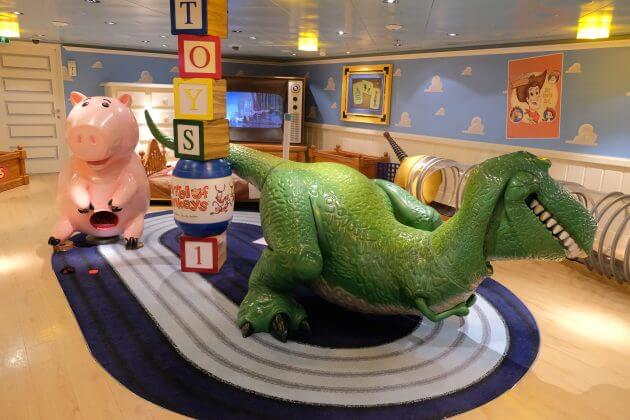 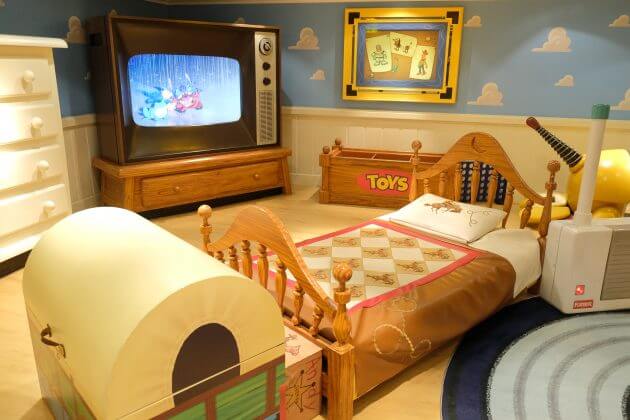 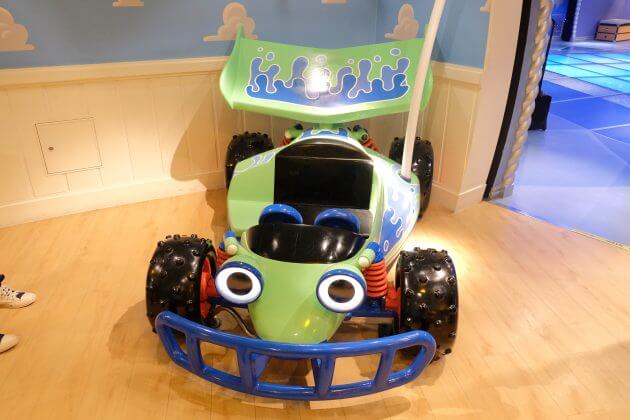 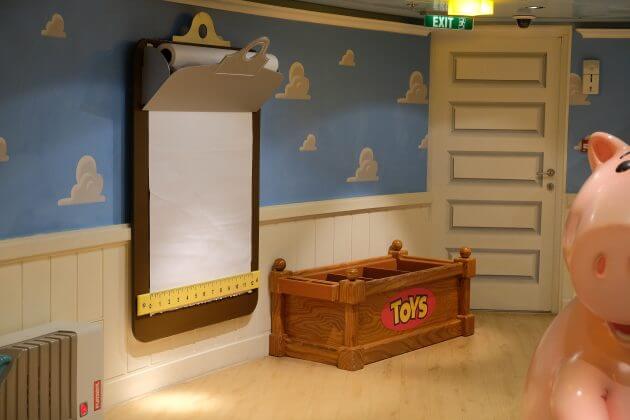 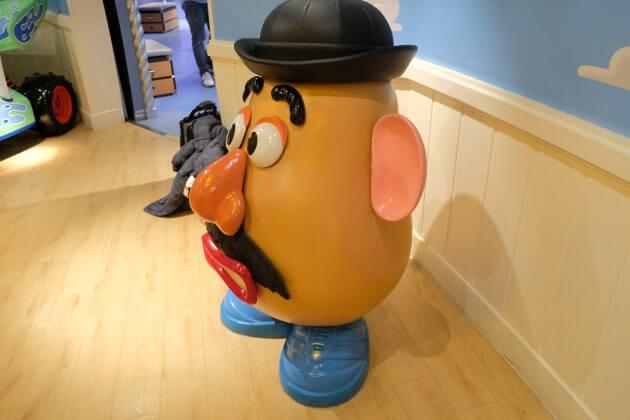 The Disney Infinity Game Room is where kids can enter the video game through virtual reality. Here, kids can test their skills with an archery challenge and get revved up by the Disney Racers program. If guests to the club are in a more artistic mood, this is also where kids can experience Picasso with Infinity Draw. 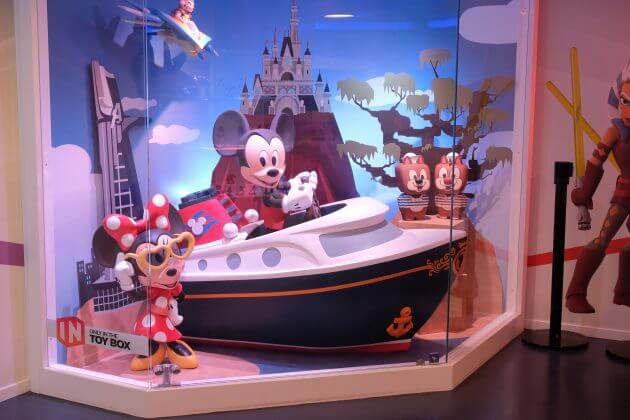 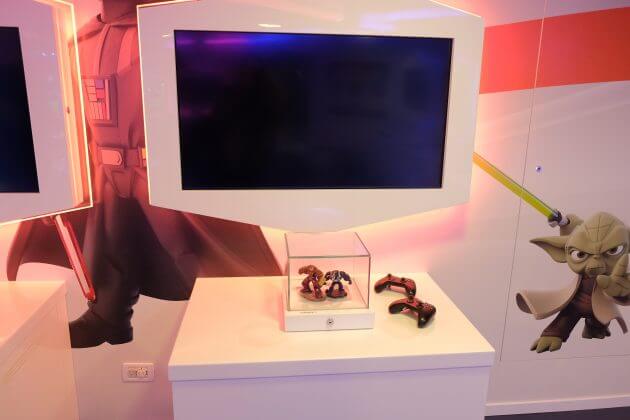 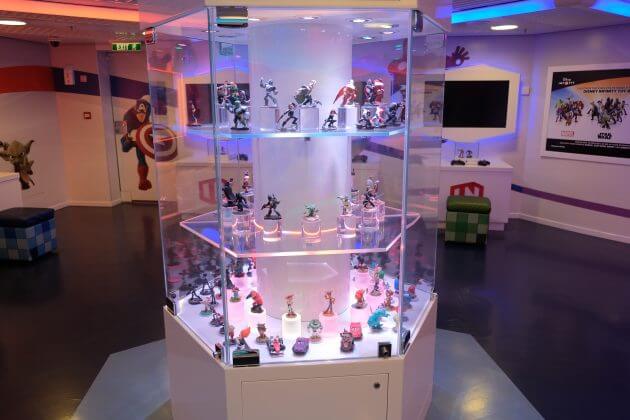 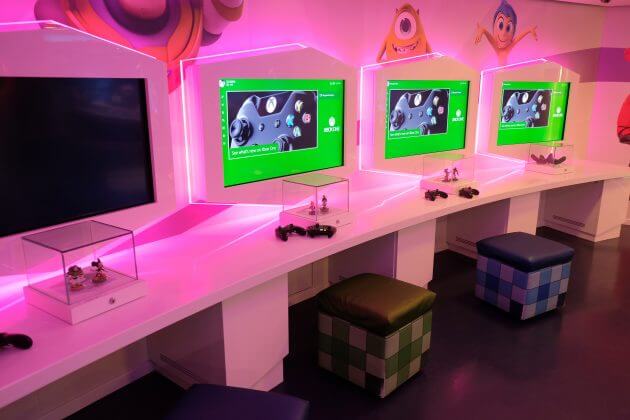 Pixie Hollow is where kids can get lost in the whimsical world that Tinker Bell and her fairy friends live in. Here, kids can play dress-up, work on craft projects, use kid-friendly tablets and listen to fairytale stories. It’s definitely a fun place to get lost in Disney magic. 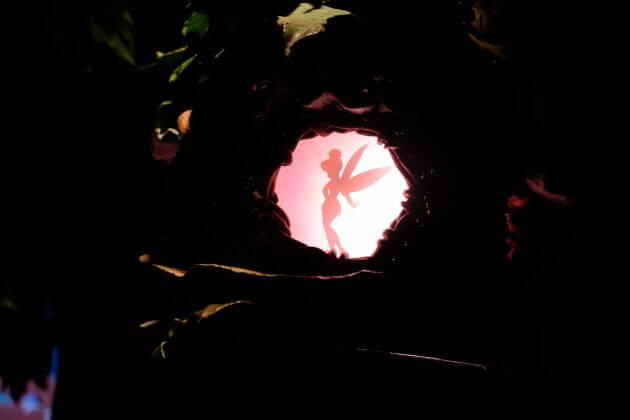 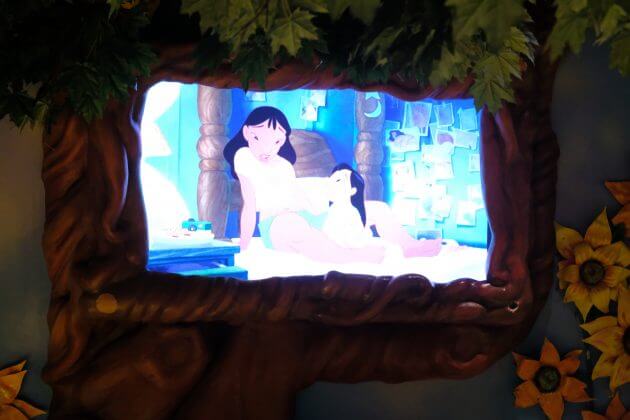 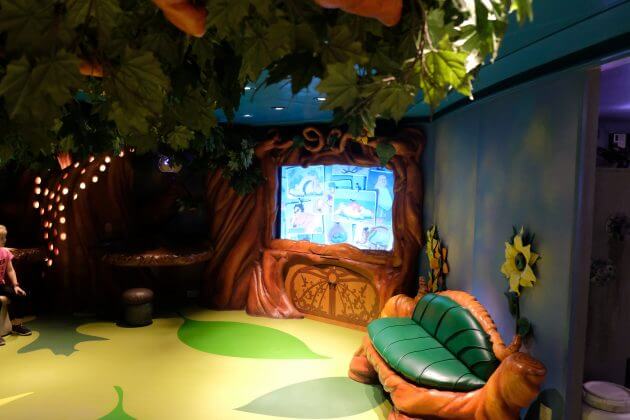 Last but not least, what has to be the most transformative and well-decorated of the four rooms is Star Wars: Millennium Falcon. Here, kids can join the Rebel Alliance. This area is also a place for kids to watch a large-screen TV, design a starship, train like a Jedi or climb into Han Solo’s cockpit and send the “fastest hunk of junk in the galaxy” soaring through the Star Wars Universe. 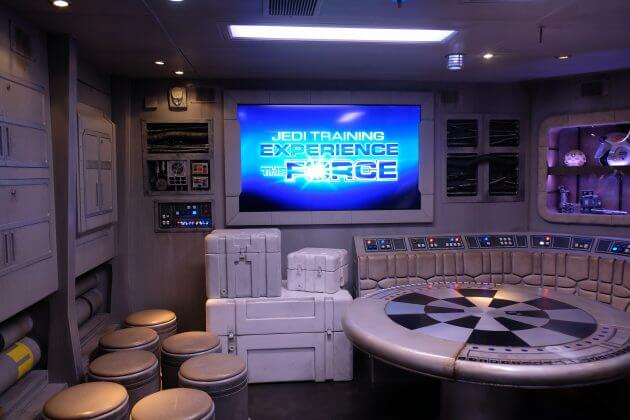 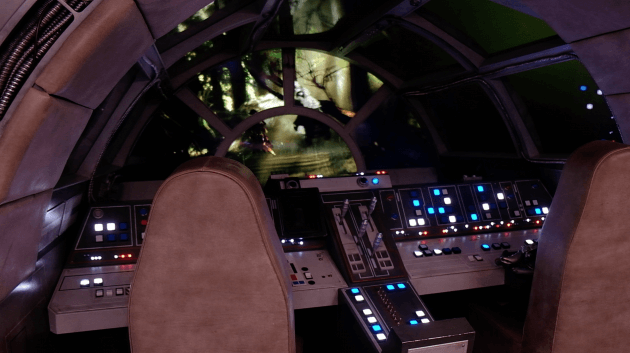 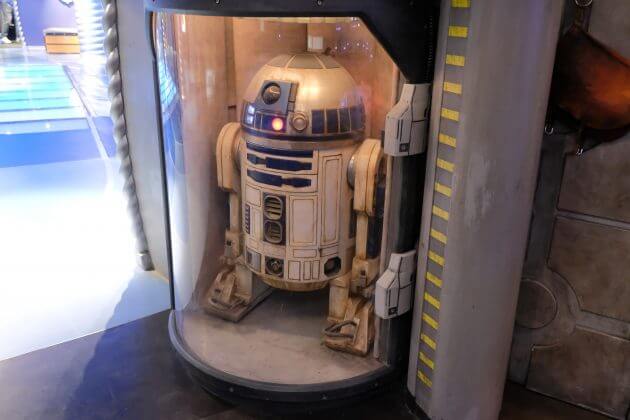 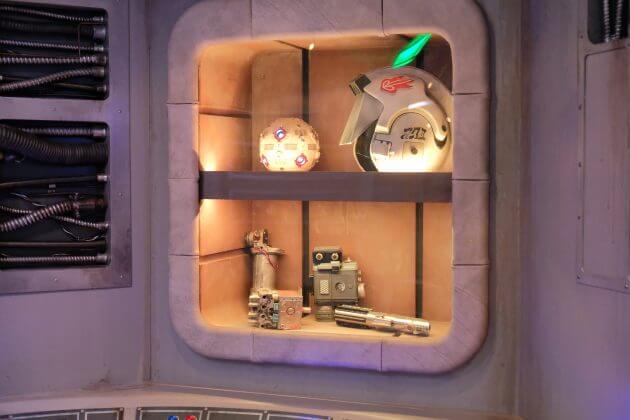 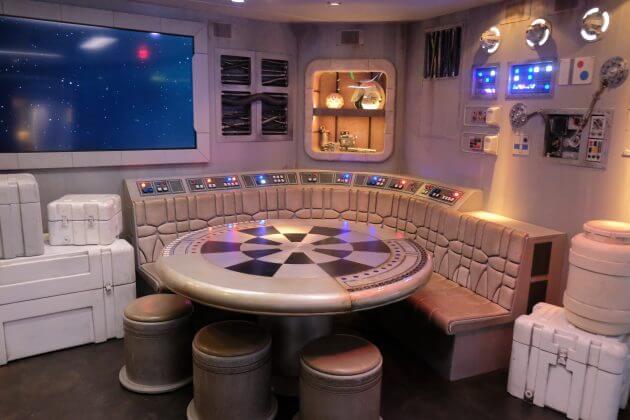 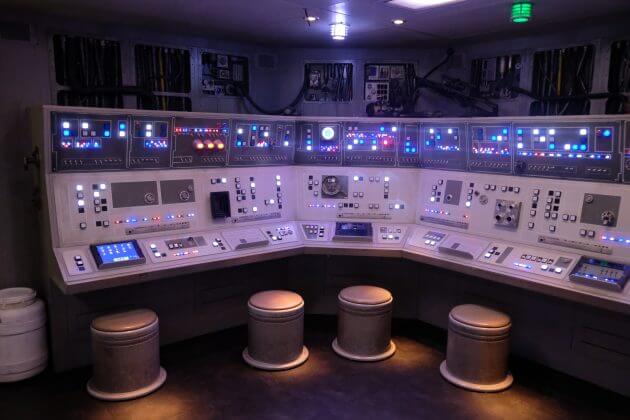 Another fun activity found in this area is Experience the Force, an interactive character presentation. During this presentation, real Stormtroopers and an Imperial Officer come to imprison the kids and their Jedi leaders. However, from the training of how to use the Force within them, the kids are able to defend themselves and ultimately save the day. Take a look at the full experience below.

Some other fun Disney Character experiences kids can enjoy in the club include:

For kids who don’t fit into the age ranges of 3 to 12, the Oceaneer Club holds open houses throughout the cruise for guests of all ages to experience the inside of this magical area. Areas for younger kids and older teens on the ship include it’s a small world Nursery (ages 6 months to 3), Edge (ages 11 to 14) and Vibe (ages 14 to 17).

Each of the four Disney Cruise Line ships contains a different Oceaneer Club; the coverage in this article is only from the club on the Disney Dream.

For more information about the Oceaneer Club and the Disney Dream, be sure to check out the official website.