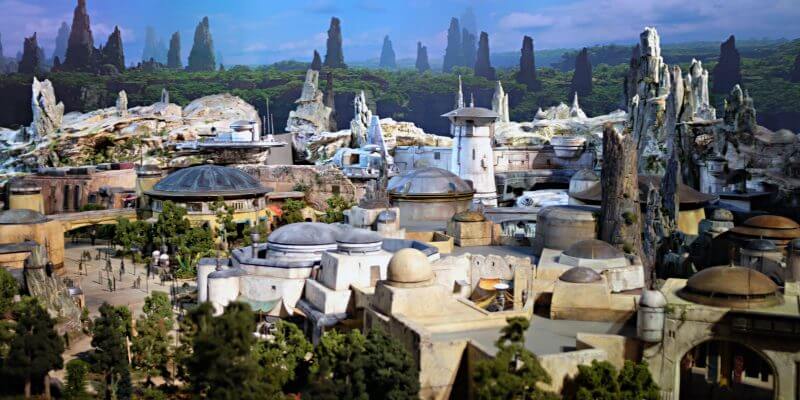 One more year… just one more year to go. One more trip around the sun until the massive, immersive Star Wars: Galaxy’s Edge areas open at Disneyland Resort in Southern California and Walt Disney World in Florida sometime in 2019. If you’re anything like me, you’re chomping at the bit waiting for the first chance you’ll have to walk through those tunnels and explore the planet Batuu. But though it seems so very close, it also feels far, far away. How will will bide our time until then?

As we count down the months until we all decide to permanently move into our own personal Star Wars experiences, I’ve come up with a list of five things to do in the meantime. So prep the hyperdrive engines, hold onto your Wookiees, and join me as we while away the hours together.

If you live anywhere near Anaheim or Orlando, you can easily drive past Disneyland or Disney’s Hollywood Studios where the two Galaxy’s Edge areas are being built, and keep tabs on the progress. Better yet, climb to the top of the Mickey & Friends parking structure at Disneyland to get a bird’s-eye view of the state of things.

It’s remarkable how quickly the space once occupied by office buildings and Big Thunder Ranch has been transformed to make way for this intergalactic themed land. It will only get more fascinating as time goes by, and further rockwork, building edifices, and more details are added. Do you know of other places around the parks to get a peek into Galaxy’s Edge as it goes up? I can think of a few!

Whether you liked this December’s “Star Wars: The Last Jedi” or not (for the most part I really enjoyed it), there are many hours of Star Wars movies in the franchise library waiting to be revisited– with another one, “Solo: A Star Wars Story” coming out this May, long before Galaxy’s Edge opens its doors. Break out those Blu-rays, DVDs, or digital files and settle in for space-faring fun.

There’s also a vast wealth of Star Wars content in other media– novels like the excellent “Star Wars: Bloodline” that help bridge the gap between Episodes VI and VII, action-packed video games like “Star Wars: Battlefront,” intricate board games such as “Star Wars: Imperial Assault,” and even the amazing new hyper-reality “Star Wars: Secrets of the Empire” experience from The VOID, now open at both Disney Springs and Downtown Disney District.

While you’re camped out at the theme parks waiting outside the Galaxy’s Edge gates, why not visit some of the lands, rides, and shows that are already open? I’ll never get tired of Pirates of the Caribbean and Haunted Mansion at Disneyland, or The Twilight Zone Tower of Terror at Disney’s Hollywood Studios.

Better yet, why not catch another glimpse of Batuu aboard the Starspeeder 1000 on Star Tours, the very first Star Wars attraction to open at Disney parks, which celebrated its thirtieth anniversary last year? There’s also the Lucasfilm-inspired Indiana Jones Epic Stunt Spectacular and Indiana Jones Adventure: Temple of the Forbidden Eye, both recognized as time-honored Disney park favorites.

4 – Explore other forms of entertainment.

As much as it pains me to admit it, there’s plenty more to the world of popular culture than just Star Wars. Consider reading one or two classic American novels, seeing all the movies in the IMDb top 250, or even checking out the growing world of immersive theater as we’ve recommended here at Inside the Magic.

Another interesting possibility would be to delve into the media that George Lucas has cited as the inspirations for Star Wars: Akira Kurosawa’s samurai movies, John Ford’s westerns, David Lean’s epics. It’s all great stuff and there’s a reason Mr. Lucas loved them enough to put them all in a blender and reconstruct them into something wholly original.

5 – Absorb the real world before we never want to return to it.

Look, there’s a very real possibility that once we all step foot into Star Wars: Galaxy’s Edge, we may never want to leave. With that in mind, I’d suggest setting using 2018 to turn off your TV, set down your mobile device, and head out into the wilderness around us. Visit a national park, go rafting down a river, try spelunking in a pitch-black cave.

Roughing it outdoors can come across as uncomfortable, but there’s no way I can express how amazing and jaw-dropping some of the sights around the United States (and, I’m sure, the world) are until you’ve gone out to experience them for yourself. It took me a while to appreciate the idea of getting away from it all and getting back to nature, but once I did, it became one of my absolute favorite things to do.

So that’s how I recommend getting through the next year. Well, all those things in addition to regularly coming back to join us here at Inside the Magic as we explore the world of themed entertainment. And rest assured, once it opens– when Star Wars: Galaxy’s Edge is finally ready to welcome its first guests, we’ll be right there to give you a first look.