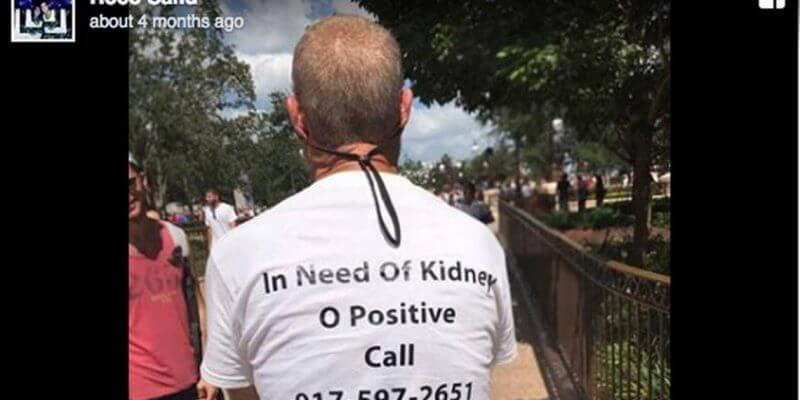 The wait to find a kidney donor can take several years. Luckily, for Robert Leibowitz,  he was able to find a match within a few months thanks to a shirt he wore to Magic Kingdom.

The 60-year old New Jersey resident followed his daughter’s advice and wore a shirt to the most magical place on Earth that read “In need of a kidney. O positive. Call 917-597-2651.”

While that may seem like a long shot, Rocio Sandoval asked Leibowitz if she could take a photo and share it on social media. That photo went viral and was shared 33,000 times in 24 hours. Suddenly the odds weren’t so bad.

After receiving several calls from people who wanted to help but couldn’t because they weren’t a perfect match, Leibowitz received a call from Richie Sully.

Sully, who lived in Indiana, spent 14 hours on a bus to get tested. When the results came back, it turned out he was a perfect match for Leibowitz.

“I think that I am still in shock,” Leibowitz said. “Just the fact that it is real.”

After hearing the news, Sandoval took to social media again to express her happiness.

Hello friends! I have great news! Robert has found a match and the surgery is scheduled for some time in January,…

Leibowitz’s surgery is scheduled for January 2018. A GoFundMe and a YouCaring page have been set up to raise money for the surgery and travel expenses.

After the surgery, the families plan to reunite by once again visiting Magic Kingdom.

Comments Off on Walt Disney World, kindness of strangers help dad in need of a kidney to find a match