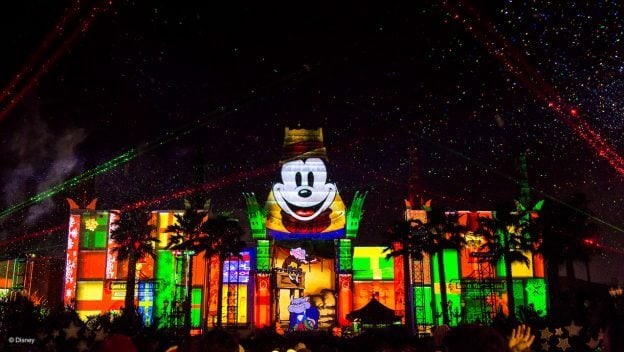 The “Jingle Bell, Jingle BAM!” projection show takes place nightly at Disney’s Hollywood Studios during the holiday season, and Disney is offering a chance for viewers at home to catch the festive show as it happens.

On Monday, December 4 at 7:55 PM ET, the full performance streams live via Disney Parks Blog. The show, which stars Wayne and Lanny from “Prep and Landing,” sees the two elves filling in for Santa, who has gone missing just before Christmas Day. The buildings and rooftops in Disney’s Hollywood Studios come alive with scenes from Mickey’s Christmas Carol, Beauty and the Beast, Tim Burton’s The Nightmare Before Christmas, Pluto’s Christmas Tree, and more. For more coverage on this year’s Flurry of Fun festivities at Disney’s Hollywood Studios, take a look at our food and merchandise guides.