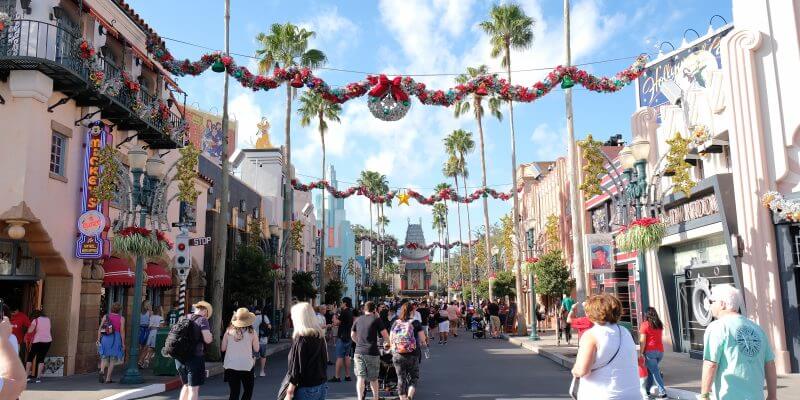 Walt Disney World is not only famous for its fireworks, attractions, rides and parades, but also its Christmas decorations! Guests travel from across the world during the holidays to get a view of these decorations and now the time is here. Only days after Halloween and Disney’s Hollywood Studios is already prepared for the happiest time of the year.

Christmas decorations immediately greet guests as they arrive to the park for bag checks. The bag check area only contains a small portion of the decorations that exist in and around the park. Upon entering onto Hollywood Boulevard you are immediately taken back by Christmas carols and guests stopping to take pictures of the newly set up displays. The decorations completely take over Hollywood Boulevard, which contains wreaths, decorative balls, tinsel, Christmas trees, garland and other adornments to signify the change of the season. Lake Echo also has a few new trimmings to fit in with the rest of the park. Gertie the Dinosaur is outfitted with a Santa Claus hat and a Christmas ornament hanging from his mouth. Decorative balls can also be found floating around the lake. The area also includes garland wrapped around its light posts and deer on special plaques. Reindeer statues can be found around Lake Echo posed in different positions. Each reindeer features a different expression. Two appear to be more excited and joyous of all of the holiday fun while another doesn’t seem to be as excited. Maybe this reindeer is on Santa’s naughty list? In the center of Lake Echo is a beautifully decorated Christmas tree, which can be seen from around the whole area. The tree is decorated with garland, bright stars, Santa heads and other bright decorations that sparkle in the sunlight. At the base of the tree are three colored Christmas balls. Along Sunset Boulevard are other decorations, including bright red and white tinsel stars attached to light posts. On buildings are more arrangements of wreaths and garland, similar most other parts of the park. Comments Off on Christmas 2017 Decorations, Merchandise arrive as Disney’s Hollywood Studios prepares for a Flurry of Fun