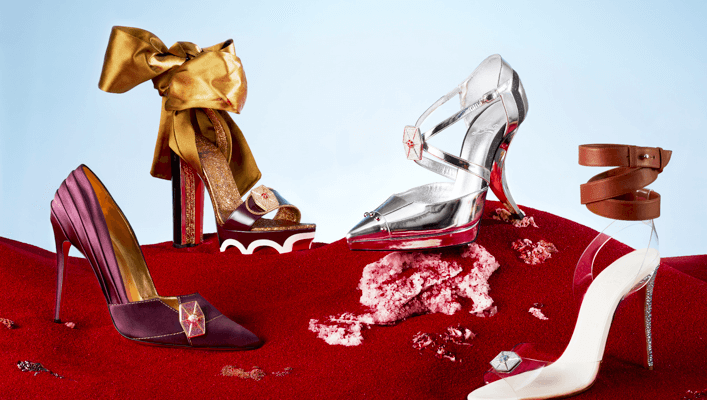 After teaming up to mark the release of Disney’s “Cinderella” in 2012 and “Maleficent” in 2014, Walt Disney Studios, Lucasfilm, and couture designer Christian Louboutin are collaborating on a new collection of shoes inspired by “Star Wars: The Last Jedi.”

Each of these styles, signed by the designer and the actress who plays the inspiration, is being auctioned off to benefit Starlight Children’s Foundation. The auction takes place from December 7 – 20. Rey (Daisy Ridley) is portrayed by an ankle-strap leather sandal inspired by the character’s costumes including the harnesses that strap her body, while translucent PVC reflects her Jedi powers and the Force she embodies. The style is finished with a blue strass heel evoking the color of her lightsaber. Vice Admiral Amilyn Holdo’s (Laura Dern) pumps are the natural extension of her costume, directly inspired by her draped burgundy cape and the strong, reserved and empowered character she portrays. Captain Phasma’s (Gwendoline Christie) shoe is evoked by the curves of her armor, represented by silver specchio leather yokes, reflecting her strict and authoritative character. Each style is embellished with a bespoke glimmering jewel inspired by the TIE Fighter.

To bid on any of these styles, visit the Charity Buzz website.

The showpiece shoe style in the collection will be unveiled on the red carpet at the L.A. premiere this weekend. The shoes will be guarded by glossy red members of the Praetorian Guard and displayed with a hyper-realistic holographic installation.