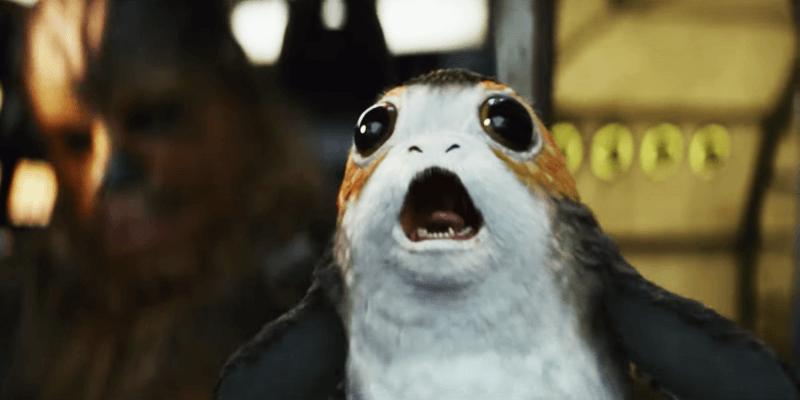 Porgs, Porgs, Porgs. That’s all anyone can talk about these days– and with good cause. They’re adorable, collectible, and just so happen to be the highest-profile new creatures set to make their live-action debut in Lucasfilm’s immensely-anticipated new movie “Star Wars: The Last Jedi” when it finally makes its way into theaters next week.

This past weekend, I had the wonderful opportunity to chat one-on-one with “The Last Jedi” creature shop head designer Neal Scanlan, who has previously worked on “The Force Awakens,” “Rogue One,” “Prometheus,” and the “Babe” movies, among many others. Besides Porg Mania, Neal and I talked about practical effects vs. CGI and the process of working with Rian Johnson to develop all of the creatures in Episode VIII. Enjoy! Q:  When do you first know which creatures will be needed for the new Star Wars movie? Is that something that first comes up in the script, or do you get advance warning during an earlier developmental stage?

A:  It varies from film to film. In the case of “The Last Jedi,” it was very early on, because [director Rian Johnson] came to the show with a very very clear [vision]. He had the whole movie in his head, so it was a joy. You could sit down and Rian would describe a scene for you, way before we even got to see the final script.

In this particular case, very early on, things like Crystal Foxes [Vulptex], Porgs, Fathiers, these were already ideas that Rian had cemented and put together. That’s not always typical. Sometimes we’re still designing characters halfway through a movie, because the script is evolving and changing and we’re having to be proactive in the same way. Q:  What were your first steps after learning about a new creature that needed to be designed for this movie?

A:  We’d normally listen to Rian describe a particular character… let’s choose a Porg, for example. He would say, “It’s called a Porg.” And immediately, you’d close your eyes and you’d say the word “Porg” and things [would] start springing into your imagination. And then he would say, “They’re a little bit like seals. They’re a little bit like puffins or pug dogs.” And we’d then, just as a group of guys, the concept team, just start sketching.

It’s very free form; it’s very blue sky. It’s very “let’s go here, let’s go there. Let’s just throw caution to the wind and let our creativity flow.” As soon as we’ve got things of any kind of merit or volume, we start to show them to Rian and at that point you’re in an x-factor scenario where certain designs will get immediately [rejected and] won’t make the second round. Some will probably move forward. It’s an unpredictable process, but it normally always follows the same route. You start very freestyle, and then bit by bit you start to hone in on a direction that you can see Rian’s going [in]. We’re responding to him in that way. You might say that we’re the hands of his mind. And when we hear him say something positive about the design, it gives us a clue we’re going in the right direction. Then hopefully you get a “Eureka” moment where you draw something on a piece of paper and Rian looks at it and [says], “Oh my gosh, that’s it!” [That’s when we know] we found what was there in his imagination.

Q:  “The Last Jedi” uses plenty of on-set practical creature effects, complemented by CGI visual effects. Can you tell me about the contrast between the two and the pros of cons of working with both?

A:  The idea is always that we try to start practically, because that’s the world of “Star Wars.” And that’s not just [with] the creatures, it’s [with] everything. It’s a very important part of the feel of a “Star Wars” film: that you feel it’s tangible and real. It’s often the case that the [specific] creature or character will answer that question early for you.

For instance, if you take something like a Porg, some little character, we know that we could operate that with rod puppeteering. We [also] need to remove those rods digitally, so we’re already working in a cooperative coming-together of the two technologies. And then there will be a point where a piece of action is such– for instance if a Porg were to appear to take off– [that] we might take the initial first few steps, and then CG will pick up and fly him to the next place, and we’ll then do the [landing]. The wonderful thing is that what we have today is the ability to be able to use digital technology to further practical effects in a way that we couldn’t have done in an optical age. And what we also have is the ability to be able to say, “You know what? The actions taking place here demand that it be [accomplished using] CG. I would say look at something like the Fathiers, which are these huge eighteen-foot-long creatures. They’re very horse-like. We can’t do those practically; we can’t make those run. So we know that’s going to be a digital effect.

The real joy is that on “The Last Jedi,” more than any film so far, we worked really well together. The technologies are starting to merge, and I think what you get from that is a fresh feel to the effects. You’re not really quite sure how it was done because the strict division between one technique and another is becoming a little less obvious. And to me, that’s the joy of it, really. Practical effects are limited because they are somewhat ground-bound, and digital can always go [wherever it wants]. But “Star Wars” demands that we always start practically and we try and achieve as much as we can in the real world, and then we take things forward.

Q:  Finally, we’re in the midst of what’s been called “Porg Mania”– there’s a lot of buzz about these particular creatures. What can you tell me specifically about how the Porgs came together, how they worked on set, and what you think the fan reception to the Porgs will be when they finally get to see them on the big screen? Will they live up to the hype?

A:  [laughs] I was terrfied about the Porgs, because I knew that we’re trying to create a little character that is not so cute that it disengages the older or more mature audience, [and] is cute enough that it [doesn’t] obscure or deny the younger audience. So the Porgs were quite a challenge, to try and find a design that was engaging to all generations.

Rian had the name “Porg” already, and I think that’s quite a descriptive name, so that helped us. We knew they were small, feathered entities, very much like puffins. So we started drawing away in the process that I mentioned, and then one day one of the concept guys drew this sort of oval potato with two little legs sticking out of it and two big eyes. [A] beautifully simple little silhouette. And Rian immediately engaged with that– that’s the “Eureka” moment that you’re looking for. Then we created them as per the script. Rian had the idea that the Porgs could very much provide some respite to this roller coaster of a movie, both emotionally and from an action perspective, and that the Porgs might give you a moment to reset. But I think more than that, “The Last Jedi” is a story of friendship. And one of the Porgs befriends [Chewbacca], and I think that friendship is a very important thing that takes place. Chewie’s normally quite dismissive and quite harsh, and this little guy manages to press those emotional buttons.

We made lots of Porgs as practical, rod-operated puppets, and the reason we made lots of them was that for any one scene, let’s say that we have this one Porg, we might need to make ten versions of him in order to be able to do all the actions that Rian’s asking for in that sequence. Again, the practical effects have their limitations, so you might have what we would call the “roaring Porg,” and then you would cut back to the scene and he’s looking more anxious, so now his little face has this anxious expression on it. They all have animatronics to make them appear alive, and they’re all rodded. There would be five puppeteers behind each Porg with little green rods bringing the wings to life, the body, the head, and their little feet. The whole idea was that we approached it like a visual effects animation. Rian was very clear about where the [edits] were, so we were able to create these characters as per the cuts.

As far as whether the audience [will like them]… I was so delighted and so relieved that the audience responded so positively towards them in the first reveal [at D23 Expo 2017], and that was a very early prototype that those people saw. They’re beautiful. The little one that you see on the dashboard [of the Millennium Falcon] is the actual production version, which is all feathers, cute and lovely.

There’s a lot more Porg action to come yet, and I think if people are endeared to them at this moment in time, they’re going to be absolutely besotted with them by the time the movie’s over. Rian has written some beautiful moments for them and they were a joy as we performed them on the set. It was fun, it brought a smile to people’s faces when we shot it, so I’m sure the audiences are going to enjoy it too.