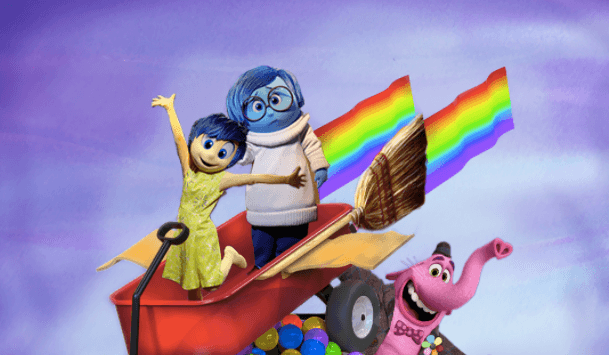 As promised yesterday, Disney kicked off its 12 Days of Disney Parks Christmas today with details on some new story elements for Pixar Play Parade, which is returning to Disneyland Resort this spring.

This year, the parade is making its way through Disneyland park as part of the limited-time Pixar Fest celebration. The delightful parade brings your favorite Pixar movies to life with three new story elements.

The parade begins just like a Pixar movie, with the appearance of the iconic Pixar Lamp. The famous Pixar Ball rolls just ahead, making a quick cameo. Beloved characters from “Up” also join the parade this year. Wilderness Explorer Russell appears on the colorful flightless bird, Kevin, with Carl Fredricksen and Dug following behind amid green foliage and snipe chicks. Carl’s beloved tethered house floats above. From “Inside Out,” Joy and Sadness take flight in Bing Bong’s rocket wagon above colorful memory orbs. For more information on Pixar Fest, visit the Disneyland website.