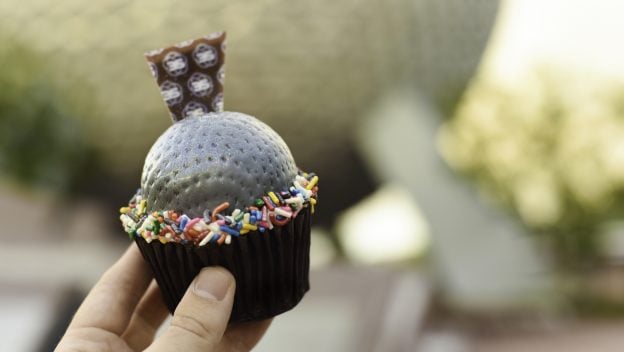 Between the holidays and the release of “Star Wars: The Last Jedi,” we’ll forgive you if this somehow slipped your mind, but today is National Cupcake Day!

Walt Disney World Resort is the perfect place to celebrate this toothsome holiday as they have an impressive lineup of delicious new cupcakes to offer just for the occasion.

At Sunshine Seasons in Epcot, guests will find two very special cupcakes. The first is a cinnamon vanilla swirl cupcake with vanilla buttercream icicles, perfect for the holiday season. The other is a vanilla cupcake with peanut butter and jelly filling topped with edible flowers from The Land pavilion that celebrates Epcot’s 35th anniversary. Over at Magic Kingdom, the Main Street Bakery is cooking up three special cupcakes for this special occasion. The first is a red velvet cupcake filled with peppermint mousse and topped with cream cheese buttercream, peppermint sprinkles and peppermint bark. At Disney’s Hollywood Studios, guests can enjoy the Flurry of Fun with a special Prep and Landing gingerbread cupcake as well as the Olaf Cupcake, a chocolate marshmallow-flavored cake topped with buttercream and everyone’s favorite snowman. And finally, guests can of course stop by Sprinkles at Disney Springs for all their cupcake needs including special holiday flavors like red velvet, chocolate peppermint and gingerbread. No matter what flavor you’re looking for, you can find yourself the perfect cupcake at Walt Disney World on National Cupcake Day.