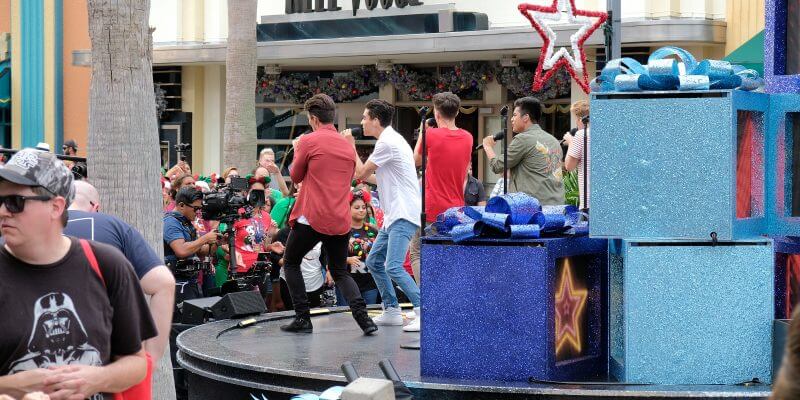 Today, guests of Disney’s Hollywood Studios were in for a special treat as In Real Life, a famous boy band performed at the park for ABC’s “The Wonderful World of Disney: Magical Holiday Celebration.”

Disney Parks and ABC have teamed up in the past for enchanting holiday specials and this year for the first time, the band In Real Life will be taking the stage in the special. This brand new boy band came together from the ABC TV show “Boy Band.” The network show was a singing contest which featured young male vocalists competing to become a member of a new five-piece boy band, who were all voted on from the show’s TV audience.

Disney Parks and ABC had previously announced that two magical holiday specials were to be aired on ABC closer to the holidays and today taping began in the park for a special TV broadcast.

Extras in the crowd had gotten to the park at 9:00 AM this morning to have a special spot in front of the stage. Guests to the park were also capable of being in the special pit if not all of the prearranged extras had shown up. All of the members of the crowd were dressed in their winter best, sporting the traditional Christmas colors red and green. To get the crowd going, an MC came out and got the crowd hyped for the coming performance. He let everyone know how they were going to be on TV and that they were getting an exclusive performance of the popular boy band’s newest song “I’ll Be Home for Christmas.” After the crowd had gotten this small spiel, techs came out and ran tests on the set’s pyrotechnics – white steam coming from tubes around the stage.

Once tests were complete of the pyrotechnics, the boys came on stage to perform their new song.

After the band finished, they started to talk to the crowd, asking them how long they had been there and other fun questions. The crowd was certainly excited, as all you could hear were screams. You almost couldn’t even hear the questions from all of the loud reactions from the crowd.

The boy band was then escorted off stage and the MC took back over. The MC discussed that all of the crowd members could post pictures of the event to social media. The performance’s hashtag was #disneychristmascelebration. Then to get the crowd hyped again, the MC took out his iPhone and had the crowd scream and wave into a selfie social media video story. In Real Life was called back on stage to perform for the second time. After this quick performance, the boys took one last break and then came back on stage for one more final time. The boy band was met with the same cheers as each time before as they began their song. The special performance ended with a blast of confetti that went all over the crowd. This special performance and many others can all be seen when The Wonderful World of Disney: Magical Holiday Celebration airs on Thursday, November 30 from 9:00 PM – 11: 00 PM ET on ABC. If you want to see the rest of the performers to be included in the special, be sure to check out our previous coverage.