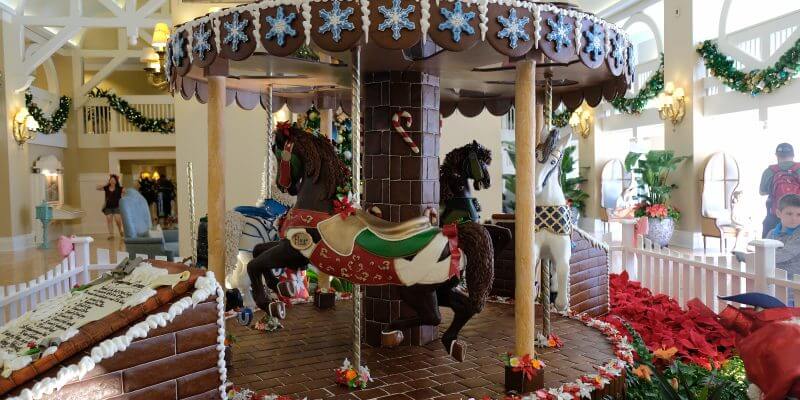 Disney’s Beach Club Resort celebrated the change of the season by putting up its classic Holiday Carousel display in its main lobby.

2017 marks the 18th anniversary of this wonderful Christmas scene. This life-sized, edible spinning carousel has become a holiday tradition as it has been recreated for almost two decades consecutively at Disney’s Beach Club Resort.

This year’s carousel was designed by pastry chefs Thomas Huebner, Jennifer Ladisky and Cindy Rowan. The “Lilo and Stitch” themed carousel features horses with hand-painted holiday characters and hand-crafted gingerbread snowflakes. And like any Disney display, it also contains numeroes hidden mickeys– 18, to be exact.

Just some of the ingredients used to make this massive candy creation include 36 pounds of honey, 96 pounds of bread flour, 100 pints of eggs, 150 pounds of icing and 50 pounds of dark chocolate. This display is jam packed full of delicious ingredients to make a beautiful seasonal spectacle. Next to the carousel is a podium with a scroll of paper fixed to it. The edible paper says “Mele Kalikimaka… Ohana, means family. Family means no one is left behind or forgotten.” This line is a famous quote that runs deep in the beloved “Lilo and Stitch” film. Outside of the carousel are the characters from the popular animated Disney film, “Lilo and Stitch.” Lilo stands holding a Hawaiian flower necklace while next to a horse and Stitch can be seen fighting with some ribbon, which he is using to wrap a gift. The Holiday Carousel is now on display at Disney’s Beach Club Resort. Guests not staying at the resort can park in Disney Springs and take a bus to the resort to get a view of the holiday spectacle.