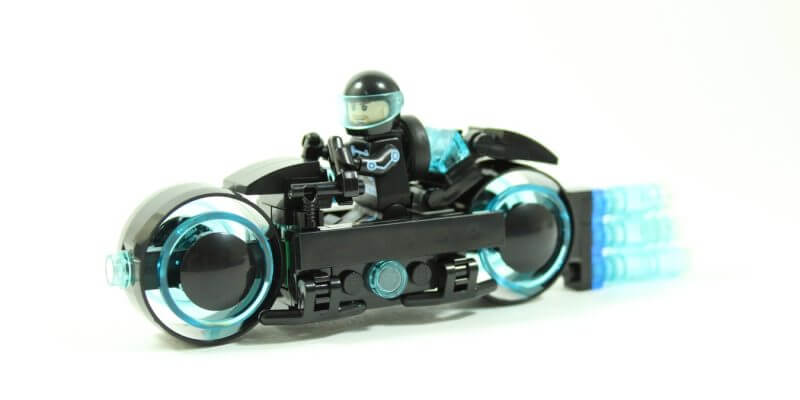 The fan-submission LEGO Ideas program (formerly called Lego Cuusoo) has already brought us highly sought-after LEGO sets based on pop culture properties “Minecraft,” “Back to the Future,” “Ghostbusters,” “The Big Bang Theory,” “WALL-E,” “Doctor Who,” and even The Beatles. And now it’s time for the world of “TRON” to shine.

In its first 2017 Review Results announcement video posted today, LEGO Ideas revealed the next set approved for production: the “TRON: Legacy” Light Cycle, inspired by the 2010 sequel to the 1982 live-action Disney cult classic.

The “TRON” Light Cycle cycle is based on the Disney “TRON: Legacy” film and consists of a TRON Light Cycle with a user minifigure Sam Flynn. It also comes with a Grid base to mount the Light Cycle on for display.

The Light Cycle allows a minifigure to easily fit into and clip onto the handles. The light cycle itself has a console in front of the user, two handle bars, and detailing down the sides. There is also a power stream behind connected to the light cycle. The Sam Flynn minifigure comes in a TRON suit with helmet and disc connected on the back of the minifigure for added detail. The Light Cycle can easily be mounted on to the Grid base with two connection points and the base has the Grid effect with black and trans-blue tiles creating a TRON feel and has a medium azure trim for finish. According to the video posted above, LEGO plans to modify and redesign the set (as they do with all approved LEGO Ideas projects) to prepare it for a consumer release in stores sometime in 2018.