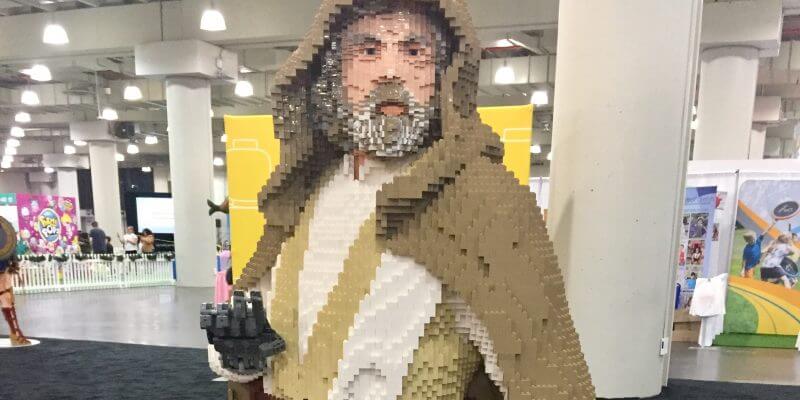 Over the weekend, New York’s Jacob K. Javits Center hosted an action-packed Play Fair 2017. The second-annual event brought a celebration of play and entertainment to the enormous Javits Center, which is also the home of New York Comic-Con.

More than 75 exhibitors attended Play Fair 2017, including Cartoon Network, Hasbro, Nickelodeon, Midtown Comics, Funko, and more. The main event was the reveal of the 2018 Toy of the Year Awards Finalists, and several hot Disney, Star Wars, and Marvel toys made the cut. A few of these finalists also made an appearance on TTPM’s Most Wanted List, which we shared back in September.

There’s some tough competition for Action Figure of the Year, with Star Wars Forces of Destiny Adventure Figures, Batbot, and Marvel’s Guardians of the Galaxy Dancing Groot Figure among the finalists. Disney-Pixar Cars 3 Diecast Cars and Funko’s Mystery Minis are in the running for Collectible of the Year. The very cool LEGO Star Wars BB-8 and Silent Mary from Disney’s Pirates of the Caribbean: Dead Men Tell No Tales led the pack among Construction Toy of the Year finalists. Racing Adventures Mickey, which also appeared at TTPM, is once again a coveted item and a finalist for Preschool Toy of the Year. Funko’s SuperCute Plushies could land Plush of the Year, along with Pikmi Pops Surprise! Mega Pop. License of the Year is another category with lots of competition from Disney-Pixar’s Cars 3, Nickelodeon Slime, and Star Wars, among others. Between now and January 5, you can visit the Toy Awards website to view the full list of finalists and cast your vote in each category. On Friday, February 16, 2018, category winners will be announced in addition to the Toy of the Year and People’s Choice winners during a gala awards ceremony at the Ziegfeld Theatre in New York City.

In addition to the unveiling of the TOTY Finalists, Play Fair 2017 offered plenty of fun for all ages. The Play Fair Official Show Store and Midtown Comics booth had a huge assortment of Funko Pop! figures, graphic novels, and comics. At the Imagine by Rubie’s booth, it was costumes galore. High-quality Darth Vader, Batman, and Jurassic World dinosaur costumes were on display. You could also snag a life-like (and creepy) Supreme Leader Snoke mask. A few highlights from the jam-packed list of activities include Jedi Training and Maddie Rae’s Slime Lab. Play Fair 2017 was packed with fun, and we can’t wait to see which toys take the crown at this year’s Toy Awards in February.

For more information on Play Fair, be sure to visit their website.

Comments Off on Toy of the Year finalists announced at Play Fair 2017 with hot items from Disney, Star Wars, and Marvel