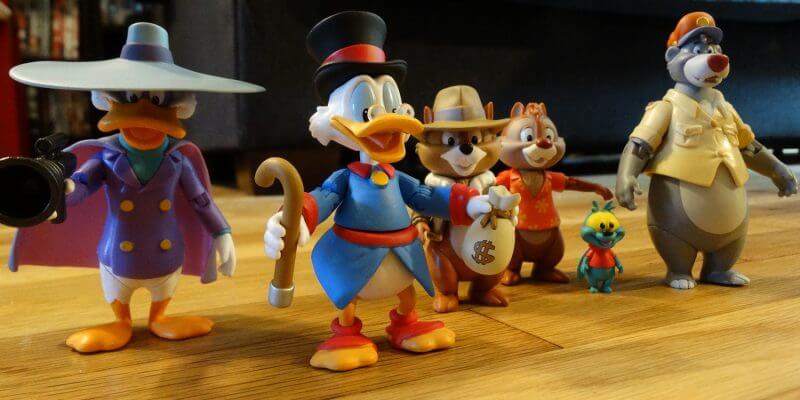 For an entire generation of kids growing up in the late 1980s and early 1990s, the Disney Afternoon was an essential part of post-school television viewing. As a huge “DuckTales” enthusiast, I fondly remember settling in on the couch each day to join Uncle Scrooge and family on their adventures around the world. Now Funko is delivering that nostalgia to toy fans with its new series of Disney Afternoon action figures and Mystery Minis.

This weekend I received a mailing of both assortments for review, and I’m extremely pleased to say how happy I am with the results. The action figures in particular are incredibly well-detailed, feature an above-average eight points of articulation each, and most importantly feel authentic to the cartoons that inspired them.


Funko’s Disney Afternoon action figures will be released this Friday, December 1st and are available for pre-order from Amazon right now: Scrooge McDuck from “DuckTales,” Baloo from “TaleSpin,” Chip from “Chip ‘n Dale Rescue Rangers,” and Darkwing Duck from “Darkwing Duck.” For whatever reason the Dale (with Zipper) figure has not shown up on the site just yet. The Mystery Minis (also available from Amazon) are smaller-scale vinyl figure depictions of the same characters, plus Gosalyn Mallard, Morgana Macawber (NOT Magica De Spell as misidentified in the video), Launchpad McQuack, Huey, Dewey, Louie, Webigail Vanderquack, Gadget, Monterey Jack, and Kit Cloudkicker. I received a full single box (of twelve figures) which meant was not able to complete the complete collection of fifteen, but I was still impressed with the sculpting and paint jobs on the characters themselves.


My box of Mystery Minis also included two duplicates (namely Chip and Dale) which is accounted for by the character frequency printed on the back of each individual package. The two chipmunks show up the most often, while the rarest characters (Morgana and Monterey) were not present among the figures in my mailing, in addition to Gadget and both Huey and Louie. Though I didn’t get a look at all the figures in the series, I can say with confidence that these will be highly valued and sought-after collectibles among the Disney fan community. The Disney Afternoon is an under-served property, and “DuckTales” in particular is having a cultural resurgence now due to the successful reboot of the show on Disney XD.

While my personal preference is for the larger, articulated action figures, any and all of the toys from both of these Funko sets will make perfect additions to the collections of Disney Afternoon fans.