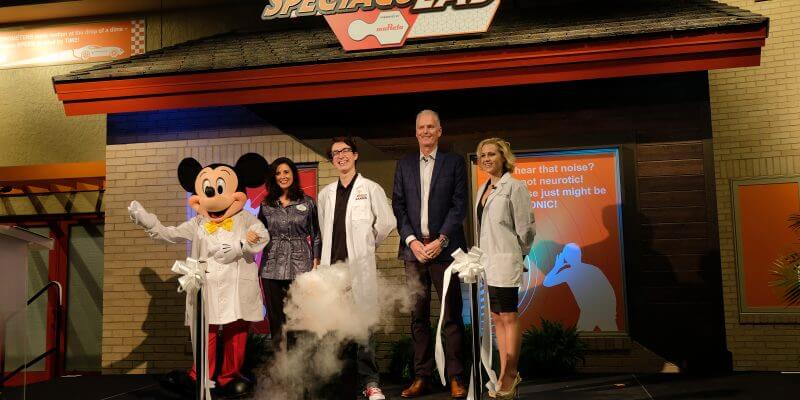 The Innoventions center at Epcot has been a staple attraction within the park since it opened back in 1994. The center focuses on technological advancements and their practical applications in everyday life. Since opening, the facility has changed a lot as it first contained an array of Sega Genesis games and experiences, and now it holds The SpectacuLAB show. The historical event first began with an official grand opening and dedication of The SpectacuLAB. Frankie, an intern and star of The SpectacuLAB show, took the floor and humorously welcomed all attendees to the occasion. After some fun jokes, Frankie took the stage and welcomed the first speaker to the event, Erika Ebbel Angle. Angle is the founder of Science from Scientists, a nonprofit organization that aims to improve STEM literacy at schools, which was in partnership with Disney for the creation of this new show. Angle discussed how important this new show is and how it will teach children how to think and handle different scientific problems that occur in everyday life. Angle then took a special ingredient and added it to a beaker positioned in the center of the stage. David Kirk, the president/CEO at Murata was then announced to speak. Murata is a global leader in design, manufacture, and supply of advanced electronic components. The company was also a part of the creation of the show. Kirk discussed Murata’s long history and the company’s excitement to be a part of the Disney parks. Kirk added his ingredient to the beaker and then Epcot’s Vice President Melissa Valiquette took the stage. Valiquette discussed the new attraction and its significance to the park, also talking about Epcot as a whole and its influence on young visitors. After Valiquette added her ingredient, Mickey took the stage to pose for a few photos and add the final ingredient. Once Mickey poured his ingredient into the beaker, he stepped back as gas and fireworks sparked out of the glass container. The fireworks cut the show’s ribbon, marking the official opening to the new attraction.  After the excitement of the Dedication, it was time to see the new show. The SpectacuLAB is an interactive show that invites guests to join a group of real scientists and their intern for a series of thrilling experiments. The team puts scientific principles like ultrasonic pressure, barometric pressure, acceleration and force to the test. Guests of all ages can participate in this funny show to discover how each of these scientific principles has inspired the technology we use today. The show features not only Frankie the intern, but also Montana Steell and Najja Gay, who are both scientists who have worked in different areas of research and scientific study.

If you’re lucky, you may be called upon to help for one of the demonstrations as Frankie, Montana, and Najja all ask for the help of the audience throughout the show. If you want to experience this educational and exciting new show, be sure to head over to Epcot at Walt Disney World. The show now runs at the park five times a day.