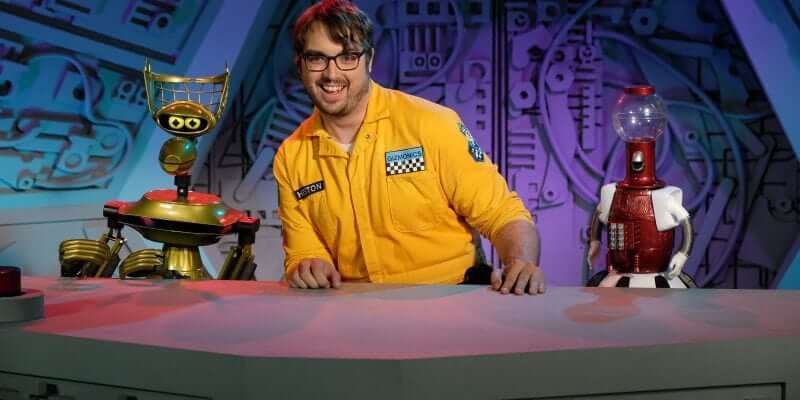 We’ve got movie sign yet again! “Mystery Science Theater 3000” is returning for a landmark twelfth season– its second on Netflix after this year’s successful relaunch with new host Jonah Ray.

Fans who tuned in for the entirety of yesterday’s annual Thanksgiving “MST3K” Turkey Day Marathon were rewarded at the very end of the live stream with an announcement from series creator Joel Hodgson himself.

Joel also took to Kickstarter (where the campaign for the current run of “MST3K’ was launched back in 2015) to make a short statement: “‘Mystery Science Theater 3000: The Return’ has officially been renewed for another season on Netflix in the ‘not too distant future!’ I wish I had more details to share, but so far, that’s literally everything we’re able to announce – and, of course, I’ll tell you more as soon as I can.”

While we don’t yet know how long we’ll have to wait to see more new episodes starring the above-mentioned Jonah opposite Felicia Day and Patton Oswalt (as the mad scientists who have him trapped in outer space watching terrible movies), in the meantime the show’s official website has a great Black Friday weekend sale going on to help fans build their movie riffing collections! Over at MST3K.com’s Turkey Day Sale, MSTies can stock up on everything from DVDs to apparel to drinkware featuring Tom Servo and Crow T. Robot and their snappy wisecracks. The site is offering the following can’t-miss deal from now through Monday:

It’s a great way to grab gifts for the Satellite of Love devotee in your life, or even build your own library of cheesy movies to enjoy over and over again. What do you think, sirs?