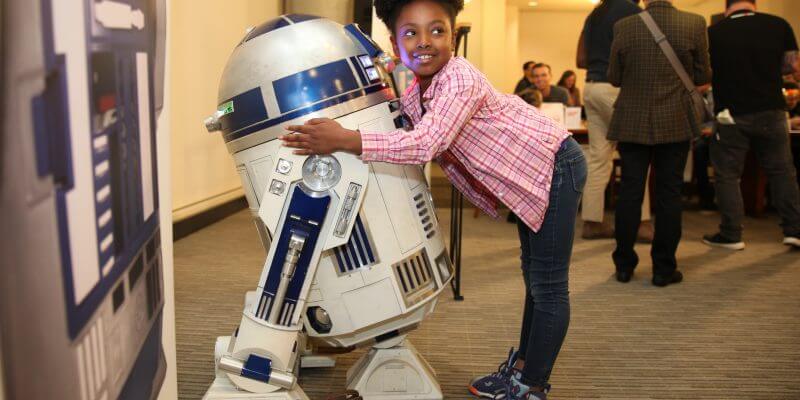 Iconic Bay Area technology companies came together at the Lucasfilm San Francisco campus for the first-ever “Droidathon,” where inventors showcased their Droid creations and discussed their ideation and inspiration. The competition kicked off on November 15 and will run through January 10, 2018. Fans and families will be able to submit their own Droid design creations. Qualifying submissions will be judged by “Star Wars: The Last Jedi” stars Daisy Ridley and Kelly Marie Tran alongside littleBits Founder and CEO Ayah Bdeir and Lucasfilm President Kathleen Kennedy. “Star Wars has always expanded kids’ imaginations and inspired them to see what is possible,” said Kathleen Kennedy, president of Lucasfilm. “We’re excited to collaborate with all of these incredible companies and littleBits to showcase the power of STEAM (Science, Technology, Engineering, Art, and Math) in action and inspire the next generation of inventors.”

Both the Droidathon event and competition seek to inspire kids to explore technology and think of themselves as inventors: to accept challenges, make mistakes, persevere, and feel the triumph and pride of creating something with their own two hands. “We believe the two best way to inspire kids about STEAM is through fun and role models. What could be more fun and inspiring than seeing the world’s top innovators and role models creating the weirdest Droids anyone has ever seen?” said Bdeir. “We’re thrilled to work together to inspire kids of all ages, backgrounds, genders and interests to become tomorrow’s change-makers.”