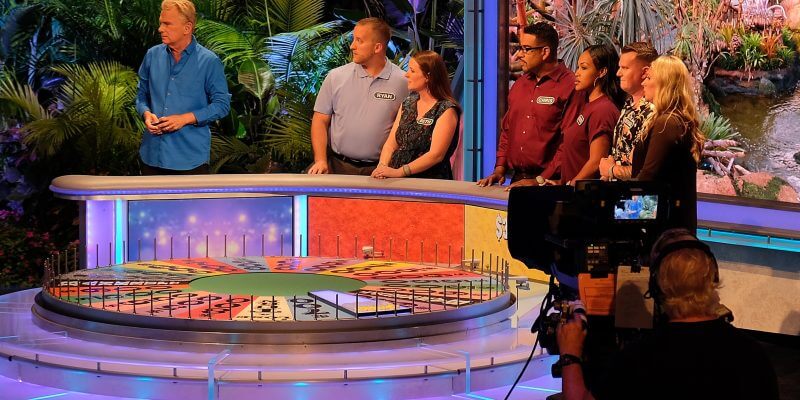 “Wheel of Fortune” takes a vacation at Walt Disney World, where it will tape 15 episodes in celebration of the show’s 35th season.

“Wheel of Fortune” has been a beloved game show, watched by millions since its premiere back in 1975. The series is a staple in network television game shows and has continued to evolve with the times to stay one of the most popular on television. Recently, the show hit its landmark 35th season on broadcast and to celebrate, it picked up its crew and the famous Wheel of Fortune and made its way over to Epcot at Walt Disney World. Coincidentally, Epcot is also celebrating its 35th year in operations, making for a more than fitting location shoot.

Before the taping, ITM and some other bloggers got to sit down with legendary host Pat Sajak and co-host Vanna White to discuss the show’s 35th season and their experiences at the Walt Disney World resort. Sajak and White even discussed some of their favorite rides at the resort and what they look forward to most when taping at the world famous vacation destination. Grid lights that hung from the ceiling shined bright over the big stage as guests poured into empty seats. Laughter and cheers drowned out the background music that played before taping began as the crowd couldn’t hold back its excitement. The stage, located at the entrance of Epcot’s World Showcase was the place to be, especially for diehard fans who have enjoyed the popular show for the past three decades.

WATCH – BEHIND THE SCENES “WHEEL OF FORTUNE” AT EPCOT:

To entertain and warm up the crowd before taping began, talent came out and started to tell jokes to the audience. The host asked guests where they were from and got guests to sing along to popular music, which got audience members even more hyped for the coming taping of the show. Then the lights went low and the music stopped, a crew member came out and called 2 minutes to show time. The comic then said his goodbyes and wished the audience a great time at the show. This led to the moment we were all waiting for, Pat Sajak and Vanna White taking the stage. The audience all clapped in excitement as the world famous hosts came onto the set.

Immediately, Vanna took her position in front of the puzzle wall and Pat went over to the wheel, where he introduced all of the contestants. For those who don’t watch the show, this is when Pat goes through the contestants one by one, having them introduce themselves to the viewers at home. Once the introductions finished, the puzzles began. During commercial breaks, between the times of crew members running around the set, Sajak and White would interact with audience members. Sajak discussed the taping and asked audience members if they were enjoying their time at the show. Towards the end of the taping, White got a microphone from backstage and did a mini Q&A with the audience members. This was when White revealed how much she enjoyed the Avatar Flight of Passage ride at Animal Kingdom’s Pandora – The World of Avatar, which as she said, “Scared her to death, but it was fun.” She was also asked who her favorite Disney Character was, which she couldn’t answer because “she loved them all.” After a few minutes of questions, Sajak called from across the stage to White that it was time to get back to the taping as there was only one segment left in the show.