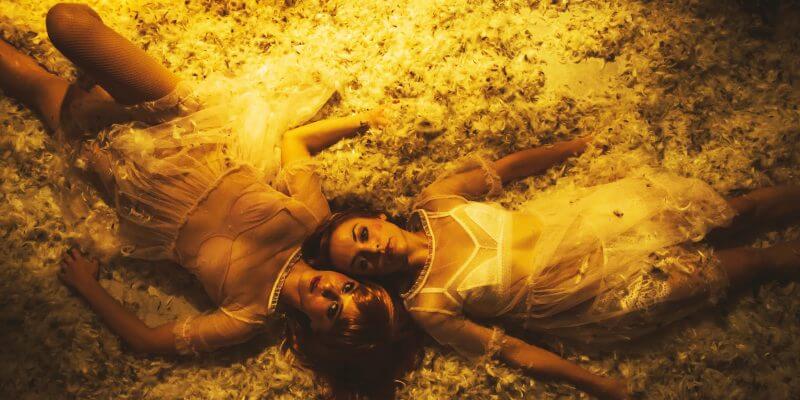 The show begins with a harrowed writer hunched over a typewriter in a dimly-lit room. He hacks away furiously, intermittently arising to check the notes he has scattered around the room and pinned to the walls. A voice-over informs us of the role stories play in all of our lives. What follows is a scattershot collection of moments that, while effective in their own right, never quite come together to fully deliver on that promise.


This year’s iteration of “Creep LA” welcomes guests into the basement of a large creative space in Downtown Los Angeles, which has been meticulously transformed into an elaborate maze made up of over a dozen vastly different tableaus. The production design is top notch– every corner is evocative and otherwordly. Characters lead the audience from one scene to the next, where haunting and oftentimes disturbing incidents play out in front of them.

Interaction between actors and participants is limited, as attendees are instructed not to speak throughout the performance. But occasionally a character will instruct one of the guests to perform an action or go somewhere separate from the rest of the group, and it’s in those instances that “Lore” really shines. Connecting one-on-one with a convincing thespian in a fully-realized space can make the real world outside disappear and transport you somewhere magical. To that end, the performers in “Lore” are all at the top of their games, and each was fully committed to their role in the individual vignettes presented throughout the play. Like the set construction before it, the amount of work that must have gone into blocking choreography and rehearsals to make sure everyone ends up where they need to be at all times is daunting to even think about.

The only real problem arises in that there’s no cohesive whole to “Lore.” It’s a collection of effectively eerie moments, but those moments never quite add up to anything larger than themselves. Of course we must take into consideration the fact that 2017’s “Creep LA” has been sponsored by Amazon, and the show was constructed as a promotional tool for its new original series of the same title. Though I haven’t seen Amazon’s upcoming “Lore” yet, I’m certain that each vignette in the “Creep LA” show corresponds appropriately with an episode from the anthology-style series. With that in mind, it serves as a tantalizing living trailer for the TV version, introducing a variety of intriguing ideas but never quite following through on them. Once you become invested in a certain scene or a character’s specific plight, you’re whisked away down a hallway or through a fireplace to something else entirely, forced to get your bearings once again. “Tune in to Amazon next week to find out more.”

“Creep LA” is undeniably artful in its execution, and for what it is I walked away with a number of memorable images seared into my brain. In a visual and visceral medium such as immersive theater, oftentimes that can be enough. But at the end of “Lore” last night, I found myself wanting more– more overall meaning, more closure, more than just “hey, that set looks really neat” or “this character is weirding me out right now.” As the show reminded me yet again in its final voice-over monologue, story is important too. “Creep LA: Lore” runs from now through mid November in Los Angeles, California. Be sure to visit the event’s official website for more information and ticket sales resources.