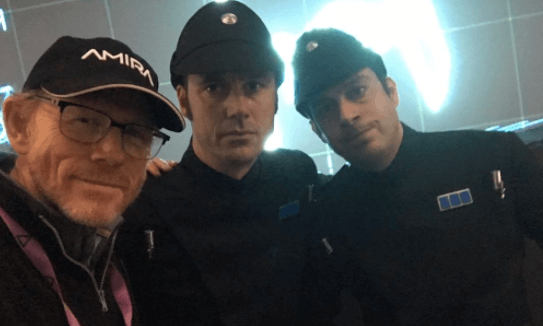 Ron Howard has been teasing “Star Wars” fans with behind-the-scenes peeks from the set of the new untitled Han Solo film, and his latest tweet reveals the inclusion of two characters from non-canon comics.

Howard’s tweet implied Tag Greenley and Bink Otauna, characters created by Kevin Rubio, would be making an appearance in the film. Tag and Bink appeared in Rubio’s non-canon Dark Horse series titled “Star Wars Tales,” and Rubio told The Verge he was asked to create additional issues based on the characters. This led to Tag & Bink Are Dead 1, Tag & Bink Are Dead 2, The Return of Tag & Bink: Special Edition and Tag & Bink: Revenge of the Clone Menace. The duo is loosely based on Rosencrantz & Guildenstern, minor characters from “Hamlet” who inspired Tom Stoppard’s play “Rosencrantz & Guildenstern Are Dead.”

Jon Kasdan, one of the film’s screenwriters, later confirmed the cameo on Twitter in a reply to Kevin Rubio.

Thank You, Kevin. I'm a huge fan and I had to get 'em in there, and then had to play it myself (with Toby Hefferman) to do it justice

Not only are Tag and Bink becoming an official part of the Star Wars universe, Kasdan himself will be playing one of the roles alongside Toby Hefferman, the movie’s Second Unit Director.

It’s not clear how big a role Tag and Bink will play in the movie — it’s possible they’ll only appear in a quick cameo — but it’s good news for fans of the characters.