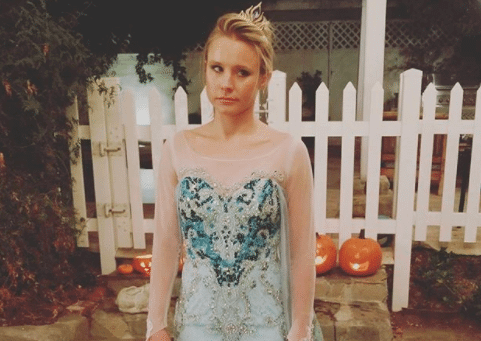 As Kristen Bell demonstrates, parents will do anything for their kids.

Bell, who voices Anna in Disney’s “Frozen,” dressed up as her movie sister Elsa at the request of her daughter. The star of “The Good Place” shared a photo of herself in costume with a caption referencing her NBC sitcom: “When your daughter demands you BOTH be ELSA for Halloween…you GRIN AND FORKING BEAR IT.”

When your daughter demands you BOTH be ELSA for Halloween…you GRIN AND FORKING BEAR IT. #halloween

Bell is reprising her role as Anna for “Olaf’s Frozen Adventure,” a short “Frozen” follow-up that screens before Disney-Pixar’s “Coco.” A feature-length sequel to “Frozen” arrives in theaters in 2019.