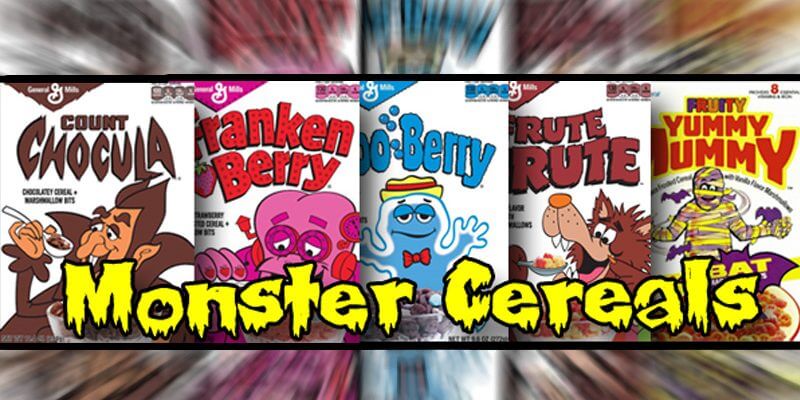 Growing up in the 1970s was a magical time for me.  There were no computers, cell phones or even VCRs to distract from real play time.  It was during this disco decade that I discovered the fiendish delight of Universal Studios’ Classic Monsters.  Frankenstein, Dracula, Wolfman, The Mummy, and the rest of those amazing horror movies were the start of a horror (and science fiction) filled childhood that continues to this day.

When General Mills introduced Monster Cereals (or rather when I was introduced to these sweet breakfast wonders), I formed a friendship that is rekindled every Halloween season.  When I see Frankenberry, Count Chocula and Boo Berry appear in the grocery store, I know the best time of the year has once again materialized.

Count Chocula and Frankenberry burst onto the breakfast table in 1971.  Why General Mills decided to dedicate a pair of sweetened corn based cereal and flavored marshmallows to a pair of friendly monsters is not clear, but their arrival and reception was a “super sweet” success.

Count Chocula, voiced by Larry Kenney (Sonny/Cocoa Puffs cereal) was inspired by Bella Lugosi’s Dracula (right down to the accent).  With chocolate flavored corn cereal and marshmallows, Count Chocula cereal is almost like having a candy bar for breakfast.  It was the first cereal to feature this fine flavor. Frankenberry’s pink pallor, steam gage/whistle vent and strawberry fingernails give his Frankenstein’s Monster resemblance a friendlier, much more approachable appearance.  With a nod to Boris Karloff, Bob McFadden provided the voice for this morning meal monster.  The only strawberry flavored breakfast cereal around the time of its debut, Frankenberry features a corn based pink kibble with strawberry flavored marshmallows. Poor Frank had a slight mishap in his early years, as the (harmless) dye used in the cereal was not easily digested resulting in a pink predicament a few hours after breakfast. Both monsters maintain that their flavor is the finest when it comes time to start the day with a balanced meal; and are always bickering about whose breakfast is best.  For light-hearted representations of famous monsters, the two frighten frequently and quite easily.

Two years later (1973), the delicious-duo was joined by another spooky cereal.  This blue ghost, known as Boo Berry, brought with him the first blueberry flavored breakfast cereal to grace the kitchen table. Favored by (and spotted in films by) Quentin Tarantino, the werewolf known as Fruit Brute burst onto the scene in 1974.  Howling about the fruity flavor of his namesake cereal, Fruit Brute was not as enduring as his ghost, vampire and monster counterparts. As with Fruit Brute, Yummy Mummy did not stick around for long.  The cereal was discontinued in 1992.  An altered version of the cereal (orange crème flavor accompanied by vanilla marshmallows) appeared for a season in 2013.

From forever to seasonal The nostalgia of Monster Cereals was strong enough that plush dolls, bobble heads, hot wheel cars and more were made in the image of these magical morning monsters. First sightings of these seasonal cereals sends me back to childhood. Welcoming the first fall find, I can hardly wait to tear open this year’s box of Frankenberry (my favorite) and dream of all the Halloween fun yet to come.  Now, if you’ll excuse me, I don’t want my pink milk to make the cereal soggy. . .

Do you enjoy Monster Cereals?  What is your favorite flavor?  Please tell your tale of sweet cereal goodness in the comments below.

Comments Off on Must-Have Munchies: The Sweet Nostalgia of Monster Cereals