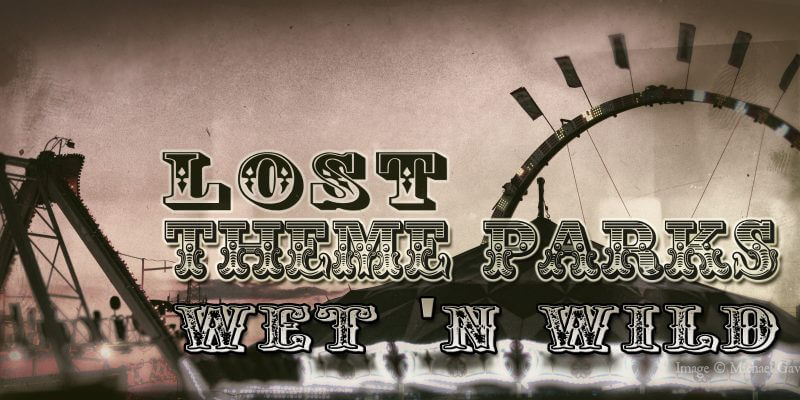 For this edition of Lost Theme Parks, we’ll dive into the history of an Orlando summertime staple: Wet ‘n Wild.

Opened in 1977, Wet ‘n Wild was conceived by Sea World developer George Millay.  This first of several water parks to bear the name Wet ‘n Wild, it didn’t really catch on until its second year of operation. It was opened all year long (with heated water for cooler winter months). The park provided a place to play in the hot Central Florida sun and offered several water slides (including a freefall slide known as the Kamikaze), a tidal wave pool and a lazy river. In addition to expanding with several franchises around the country, Wet n’ Wild’s Central Florida park added additional attractions and play areas. Less than ten years after the parks opening,  new rides like the Mach 5 beta, Der Stuka free fall body slide and a pair of enclosed water slides (Blue Niagara and Hydra Maniac) were added to the aquatic attraction.

Over the next 13 years Wet ‘N Wild saw even more splash sensation set up shop.  Unique experiences like the Disco H2O attraction and Brain Wash enhanced the parks ride roster.  A new kid’s area, Blast Away Beach was added in 2012. The final addition to the water park was a 4 lane “race” slide known as the Aqua Drag Racer, installed two years prior to the parks closure.

Until Disney opened their water parks, the International Drive attraction was the most attended water park in the U.S. Wet ‘N Wild’s success was enough to attract a buyer: Universal Studios Recreation Group.  Universal leased the land for the park until they purchased that as well in 2013.

Some of the slides from Wet ‘N Wild found new life in Volcano bay. The remaining structures at the prime property in the heart of Orlando’s tourist corridor are being razed for future Universal expansion at a cost of $3 million. Did you enjoy the water slides, wave pool and lazy river at Orlando’s Wet ‘n Wild?  Have a favorite slide or memorable experience?  Share your splash stories in the comments below.