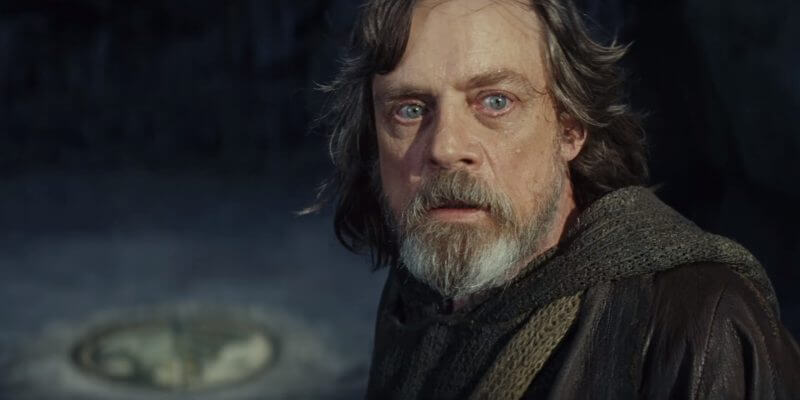 It’s finally here. Last night (while I was waiting for a press screening of Marvel’s “Thor: Ragnarok”– full review coming next week) Lucasfilm released the second and presumably final full-length trailer for its upcoming film “Star Wars: The Last Jedi.” And now that I’ve had some time to sit down with the preview– not to mention comb through it shot-by-shot– I’d like to share my thoughts and analysis.

But before we get started, I want to take a moment to finally acknowledge that I was wrong about two key points in my analysis of the previous trailer, which was first shown at Star Wars Celebration in Orlando this past April. My first correction is that the smashed black helmet on the ground was indeed Kylo Ren’s and not Darth Vader’s as I initially thought, and the second is that Rey trains with Luke’s first (blue) lightsaber and not his second (green) one, though I swear that shot made it look green on the big screen at the convention. Special thanks to the commenters who were right back then, while I was in fact wrong.

Now, let’s move on to the topic at hand.

SHOT #1 – Kylo Ren (Adam Driver) looks out over his kingdom in a Star Destroyer hangar bay, with old-style Imperial AT-AT and AT-ST Walkers in the background.

VOICE-OVER #1 – “When I found you…” – We can probably assume Supreme Leader Snoke (Andy Serkis) is addressing Kylo Ren.

SHOT #2 – Now we get the contrast with the new First Order AT-M6 Heavy Assault Walkers alongside AT-ATs and Kylo Ren’s Upsilon-class command shuttle, during a raid on the planet Crait. We saw other shots from this action sequence in the previous trailer.

SHOT #3 – Kylo Ren leads a battalion of First Order Flametroopers into a cave on Crait, likely in the sequence following the one above. From an aesthetic viewpoint, this is a particularly gorgeous bird’s-eye shot.

VOICE OVER (CONTINUED) – “And beyond that…”

SHOT #5 – Ren picks up his cross-guard lightsaber. We can see the Praetorian Guards in the background. Chances are this scene takes place in Snoke’s throne room.

SHOT #6 – We see Rey (Daisy Ridley) for the first time in the trailer, igniting Luke’s first lightsaber– which also formerly belonged to his father, Anakin Skywalker. Rey is on the planet Ahch-To, where we last saw her at the end of “Star Wars: The Force Awakens.” The combination of Snoke’s voice-over and this shot hints at a possible connection between Kylo Ren and Rey.

SHOT #7 – TITLE CARD – The Lucasfilm logo. What new Star Wars trailer would be complete without it?

SHOT #8 –  A bird’s-eye helicopter shot of the island on Ahch-To where Luke and Rey meet.

SHOT #9 – Rey approaches Luke Skywalker (Mark Hamill), who we see for the first time in the trailer. It’s a safe assumption that this shot takes place immediately after the cliffhanger ending of “The Force Awakens.”

SHOT #10 – Rey continues to offer Luke his old lightsaber, again picking up right where “The Force Awakens” left off.

SHOT #11 – Luke reaches out for his lightsaber, and we get a better look at his mechanical hand. It’s still not clear whether this is an entirely new hand or simply the same one he received at the end of “The Empire Strikes Back,” but with the fake flesh removed.

VOICE-OVER (CONTINUED) – “…inside me has always been there.”

SHOT #12 – Luke cradles his old lightsaber in his hands, and looks quizzically back at Rey.

SHOT #13 – Rey explores a misty area of Ahch-To, heading toward the ancient temple ruins in the background.

SHOT #14 – A different, wider shot of the bookshelf inside the temple than the one we saw in the previous trailer.

SHOT #15 – Rey peers down at the mysterious books.

SHOT #16 – Rey trains with Luke’s lightsaber (now hers, apparently) on the Ahch-To hillside. This is the same shot we saw in the first trailer.

SHOTS #17-20 – A variety of new shots of Rey training with the lightsaber, using a large moldy rock as target practice. She skillfully whips the blade around, and then stops just short of letting the weapons come into contact with the rock.

SHOT #21 – During Rey’s training, a crack opens in the ground beneath her. We pan up to see Luke’s shocked face.

SHOT #22 – Rey’s hand on the ground, as pebbles levitate around it. Another repeat shot from the previous trailer.

SHOT #23 – A close-up on Rey’s face as she concentrates, feeling the Force.

SHOT #24 – Luke looks at Rey worriedly as he addresses her. On the ground in the background is some kind of pattern, but it’s out of focus an difficult to make out. He says “I’ve see this raw strength only once before.” We can guess he’s talking about his former student Kylo Ren.

SHOT #25 – A building has been burned to the ground, presumably by Captain Phasma and her troops as we saw in trailer #1. Luke’s hand bursts up through the rubble and begins to move it aside.

VOICE-OVER #3 – “It didn’t scare me enough then,” Luke says, continuing his thought from shot #24.

SHOT #26 – Luke and R2-D2 watch the building burn from afar in another shot we’ve already seen.

SHOT #27 – A continuation of #24, but now Luke looks genuinely terrified. “It does now,” he finishes. So it would seem Luke is afraid of Rey and her potential as a Force-wielder. He turns and walks away from the camera.

SHOT #28 – Rey rests on a rocky outcropping and peers out over the Ahch-To sea. We can see more islands in the far distance.

SHOT #29 – The doors to a lift slide open to reveal Kylo Ren, wearing his helmet. This probably takes place aboard the same Star Destroyer as the first shot.

SHOT #30 – The “Hamlet” homage. Ren holds his helmet and peers down into its eyes, as though he is looking into his own soul.

SHOT # 31 – A close-up on Ren’s eyes. We can see that his facial scar from the lightsaber battle at the end of “The Force Awakens” has been sealed over with some kind of metallic bandage.

SHOT #32 – Ren smashes his helmet into the side of the lift. Evidently the shot of the shattered helmet from the previous trailer would follow this sequence of events.

SHOT #34 – Ren pilots his TIE Silencer from inside the cockpit.

SHOT #35 – The TIE Silencer does some impressive barrel-rolling in a battle with Resistance ships. I can almost hear Anakin Skywalker saying “Let’s try spinning. That’s a neat trick!”

SHOT #36 – Kylo Ren pilots his fighter through the bay of a Resistance Frigate.

SHOT #37 – We see General Leia Organa (Carrie Fisher) standing aboard a Resistance command vessel, while other officers work in the background. It’s clear Leia can sense her son nearby.

SHOT #38 – A close-up of Ren, once known as Ben Solo, as he senses his mother’s presence as well.

VOICE-OVER (CONTINUED) – “It’s the only way to become what you were meant to be.” Could Ren be talking to Rey in this dialogue?

SHOT #39 – Leia reaches out to her son through the Force.

SHOT #40 – Kylo Ren’s targeting computer zeroes in on Leia’s command ship, and the shot pans over to reveal Ren’s thumbs perched on the “fire” buttons.

SHOT #41 – Ren looks tortured as he tries to convince himself to follow through on what he started when he killed his father Han Solo in the last movie.

SHOT #42 –  A final shot of Leia, as she awaits her fate with her son, whatever that may be.

Comments Off on ANALYSIS – Shot-by-shot with the second trailer for “Star Wars: The Last Jedi”