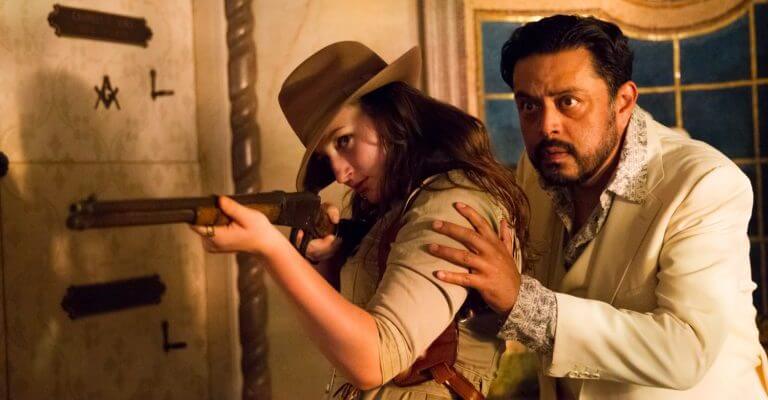 As a recent convert to the Los Angeles immersive theater scene, last year’s Southern California Halloween season was a veritable cornucopia of delights for me. But one show caught me completely off guard and impressed me more than I have been in a long time– “Wicked Lit.”

Set in and around the Mountain View Mausoleum in Altadena, “Wicked Lit” is comprised of three separate shortnarrative plays– each inspired by an existing horror story or myth– with a running interactive framing device surrounding them. The 2016 edition included tales from H.P. Lovecraft, Ellen Glasgow, and African legend.

These plays are not presented on a stage, however, but across a variety of actual, physical locations in real space. The audience follows the cast from scene to scene as they wind their way through the cavernous mausoleum or the creepy cemetery across the street.

Today Unbound Productions– the creative team and theatrical troupe responsible for “Wicked Lit”– announced the 2017 lineup of plays, and the casts that will inhabit them. THE PLAYSThe Damned ThingAdapted by Jeff G. Rack Directed by Sebastian Munoz From the short story of the same name by Ambrose Bierce

A man is part of an investigation into his own mysterious and brutal death. When the dead man’s friend becomes a suspect in his murder, he uses his newfound spirit powers to discover who – or what – really killed him.

Thoth’s LabyrinthBy Jonathan JosephsonDirected by Darin AnthonyInspired by the Egyptian legend “The Book of Thoth” Set in 1972 Altadena, three adventurers and their sidekicks are on the hunt for one of the most sought after artifacts of ancient history – The Book of Thoth. The Book is said to grant the reader magical abilities and limitless power. As the adventuring pairs pursue the Book, deeply kept secrets and painful lies are revealed as an offbeat archaeological expedition becomes a race between life and death.

Featuring Dan Billet, Joe Camareno, Kevin Dulude, Sawyer Fuller, LizAnne Keigley, David Ty Reza and Morgan Zenith.The Open DoorAdapted by Kirsten BrandtDirected by Paul Millet From the short story of the same name by Margaret OliphantModern reason clashes with the occult in this classic 1882 ghost story thriller. It’ll take a village to get to the bottom of the nefarious happenings taking place in the abandoned ruins, and with a young boy’s life in the balance, there is no time to waste. Featuring Bradley Bundlie, John Patrick Daly, Jena Hunt, Richard Large, Michael Perl, Brian David Pope and Tessa Willshire “Wicked Lit” will be performed on select nights between Friday, September 29th and Saturday, November 11th. Be sure to visit Unbound Productions’ official website for more information and advance ticketing resources.