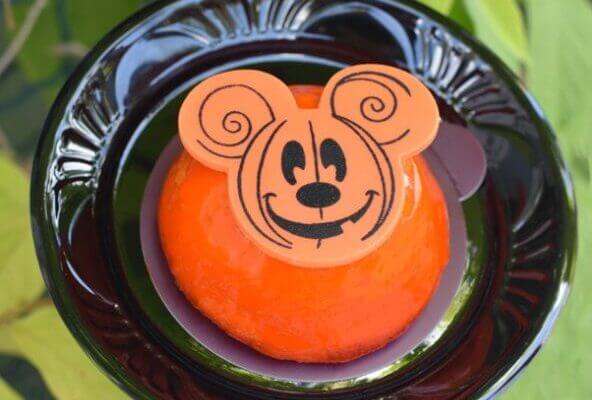 Summer is over and that means it’s pumpkin spice season! Um, I mean, Fall. Walt Disney World has all kinds of delicious treats for those who love anything pumpkin spice. If pie and lattes aren’t enough for you, Disney has you covered.

Starting at the Magic Kingdom, Sleepy Hollow will offer a twist on those classic Mickey Waffles. Served with vanilla ice cream, whipped cream, sprinkles and caramel sauce, these Pumpkin Waffles are the perfect treat for any time of day. Also in the Magic Kingdom, Main Street Bakery and Gaston’s Tavern will have the perfect dessert for pumpkin lovers. The Pumpkin Cheesecake Dome consists of a graham cracker streusel base, orange white chocolate glaze, and is topped with a white chocolate Mickey. While those two treats will only be available on nights of Mickey’s Not-So-Scary Halloween Party, Plaza Ice Cream Parlor has hand-scooped pumpkin-flavored ice cream available from now through November 1. And speaking of frozen treats, Ghiradelli Ice Cream and Chocolate Shop is offering a Pumpkin Spice Caramel Shake. For those who want to tone down the pumpkin just a little, this shake is made up of vanilla ice cream, Ghiradelli milk chocolate fudge, caramel drizzle, whipped cream and a pumpkin spice caramel Ghiradelli square garnish.

If you want to turn the pumpkin up to 11, head over to Sprinkles for some Pumpkin Spice Cupcakes. Pumpkin cake laced with fragrant ginger, clove, nutmeg and cinnamon, topped with a sweet cinnamon cream cheese frosting makes for the ultimate fall snack. The Ganachery has the perfect thing for those who are looking for a bite-sized treat. Their Pumpkin Spice Latte Ganache Squares are elegantly decorated with Halloween-themed designs, making them the perfect snack for celebrating every aspect of the season. Finally, for those who like the idea of pumpkin, but maybe not so much the flavor, head over to the Candy Cauldron for a Mickey Pumpkin Candy Apple. The green apple covered with caramel, white chocolate, orange sugar and dark chocolate, won’t taste like pumpkin, but it sure will look like one.

What’s you favorite pumpkin-flavored treat? Let us know in the comments below!