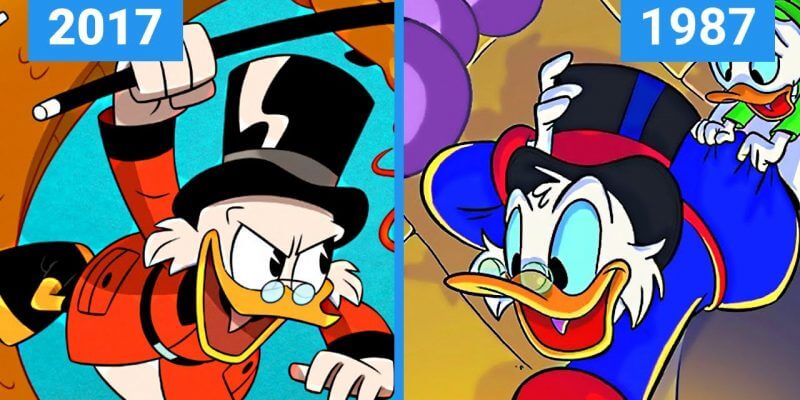 After debuting with an hour-long episode in August, the new DuckTales series returns to Disney XD on Saturday, September 23 with two new episodes.

To celebrate the official start of the reboot, we’ve rounded up a few fun clips from both the original series and the new one. Take a trip down memory lane with Scrooge, Donald, Huey, Dewey, Louie, and more and get ready for all-new “DuckTales” adventures.

First off: the theme song. The updated version is delightful, but the original song will never go out of style.

Remember how Scrooge learned his life motto, “Work smarter, not harder?” Revisit the moment from the episode “Once Upon a Dime.”

Much like his nephew Donald, Scrooge is known for his short temper. In this fun clip from “A Whale of a Bad Time,” two very bad things happen to the lovable hothead: he loses money on a shipment of ice cream and learns it was eaten by a sea monster.

In this clip, Huey, Dewey, and Louie adorably imitate Scrooge’s accent to explain why Webby isn’t allowed to join in on their fun.

Switching gears to the 2017 show, this clip comes from one of this weekend’s episodes, “The Great Dime Chase!” Get a peek at Jim Rash’s take on Gyro Gearloose, the inventor who works for Scrooge.

In this clip, Louie makes a huge mistake that’s sure to trigger one of Scrooge’s epic temper tantrums.

WATCH – LOUIE AND THE DIME:

And finally, take a look at this behind-the-scenes video that previews how the “DuckTales” team made the new series look like a comic book come to life.

WATCH – DUCKTALES 2017 BEHIND THE SCENES:

In case you missed it, Margo Martindale’s turn as Ma Beagle was previewed here. We also spoke with the show’s composer, Dominic Lewis, about creating music for the new series.

Comments Off on VIDEOS: “DuckTales” clips from past and present prepare you for a return to Duckburg this weekend