Themed Eats: Jekyll and Hyde Club in New York City - Inside the Magic 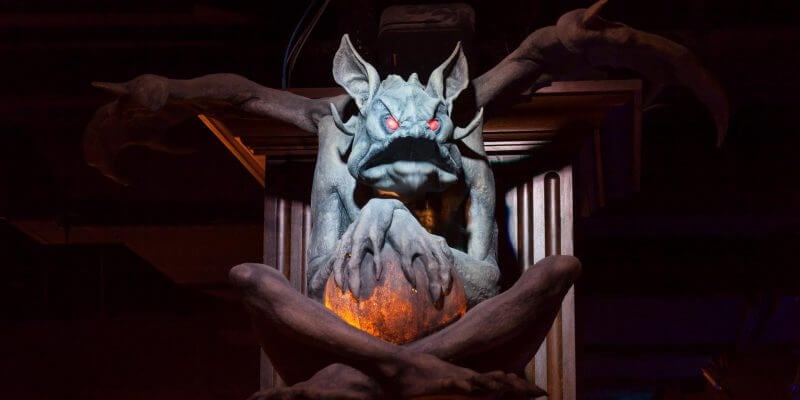 Picture, if you will a mash up of Halloween Horror Nights and the now extinct Adventurers Club from Disney’s Pleasure Island and you might begin to get an idea what the infamous eatery’s eerie experience exudes.  A true taste of terror-ific fun in the big city, it’s almost as if all of late night television’s horror hosts threw a dinner party.

Eerie World Entertainment operated the infamous “Restaurant and Social Club for Adventurers and Mad Scientists” for over 10 years at its original location on 57th Ave in mid-town Manhattan.  Several skeletons and an oversized “fallen face” betrayed the secret entrance to this cryptic club.  A password was “required” to enter. The multi-story experience featured themed settings on each floor, with small staged show on the lower level that was visible from the floors above. 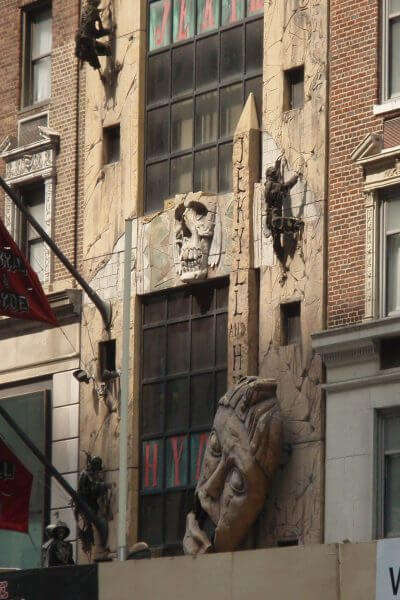 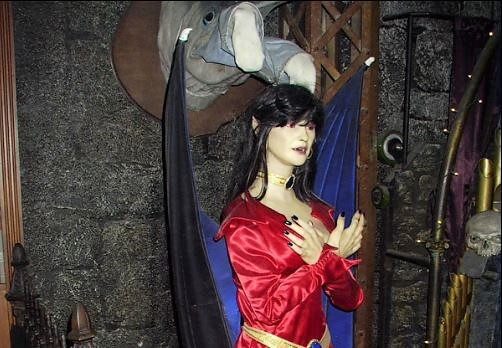 In addition to the Midtown madness, Eerie opened a Greenwich Village pub under the same Jekyll and Hyde name. This was the first, and now, only remaining, restaurant to still bear the mad scientist/monster’s name. It’s billed as the only haunted restaurant and bar in New York. 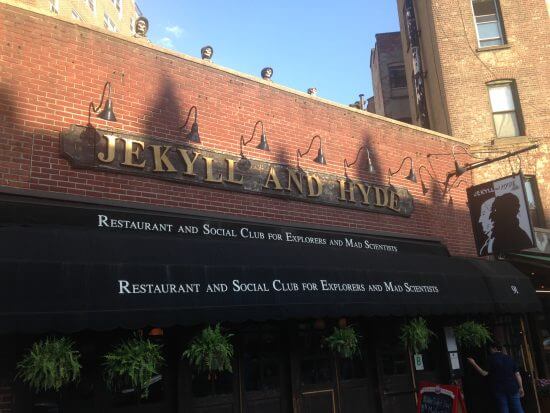 In 2012 the Gothic themed eerie eatery moved to Times Square where it remained until their lease ended (without warning that it would not be renewed) in 2015 sadly finishing the large scale spooky sensation to cease for good. 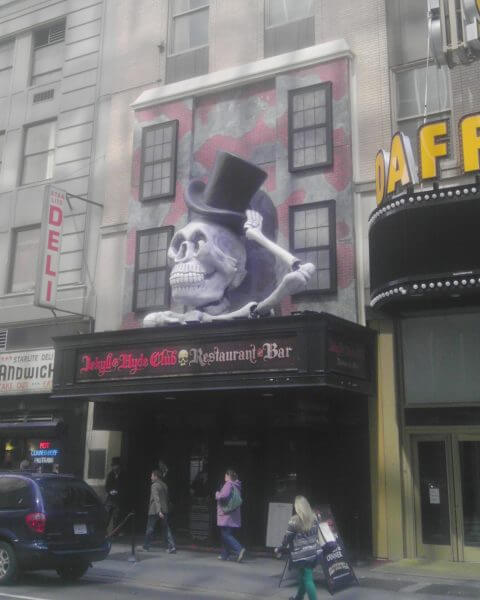 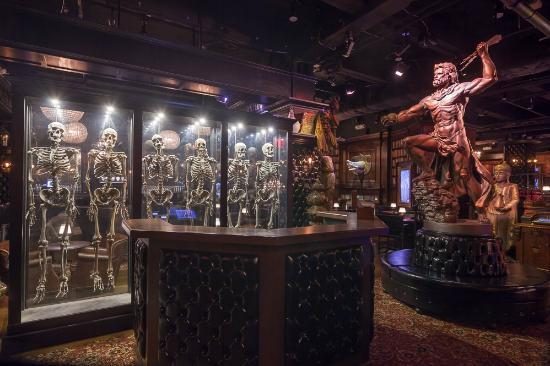 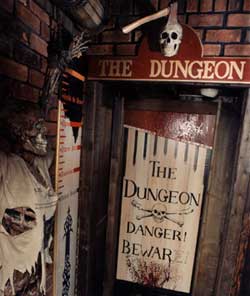 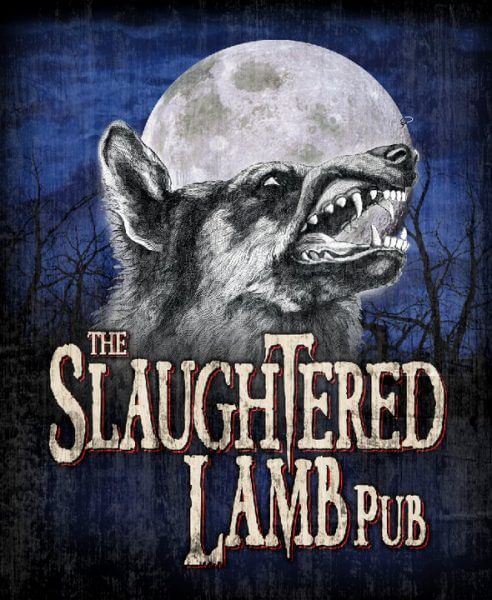 Fall 2013 saw the restricted “Chamber of Horrors”  re-opened as a haunted attraction.  The video announcement for this haunted attraction showcases the fine talents and skills of the clubs more prominent members.

While the bizarre events continue at the club, the multi-level themed rooms are but a haunted history.  Characters like Professor Shroud and the butler (Deadworthy) interact with guests as they dine.  Animatronics and staged entertainment erupts about every 10 minutes. Arcane artifacts adorn the abode to devilish delight of horror fans. 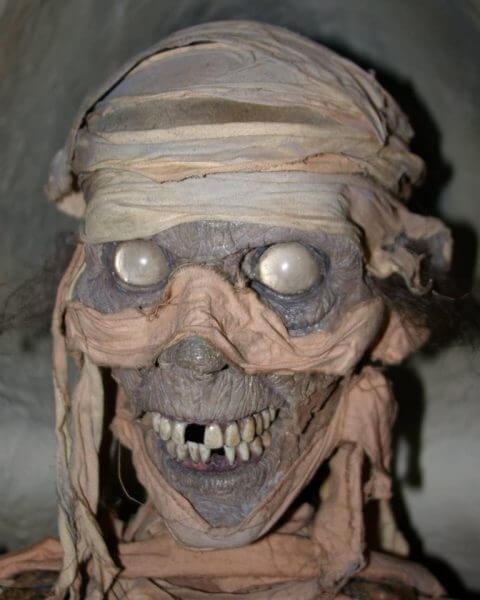 “Jekyll and Hyde offers the most unique dining experience in the world! Enjoy continuous live entertainment and spooky special effects. The creatures and memorabilia come to life and interact with you while you enjoy your meal. Encounter bizarre characters such as Claw the Gargoyle, Tobias the Werewolf, Dreadmina the Vampire or a genuine Egyptian mummy. Witness the incredible re-animation of Frankenstein’s Monster or the mysterious transformation of Dr. Jekyll into the horrifying Mr. Hyde. Something unusual happens every 10 minutes so our guests are warned.” Jekyll and Hyde Club website

Jekyll and Hyde Club offers a full bar and extensive menu including “create-your-own-monster burgers, The Mummy (a sumptuous sirloin wrapped in your choice of cheese), and the Dr. Jekyll and the Cannibal’s pizza.  Dig up the full menu via their web(site).  A kids menu is also offered (no mention of what kind kids are on the menu, but it available) 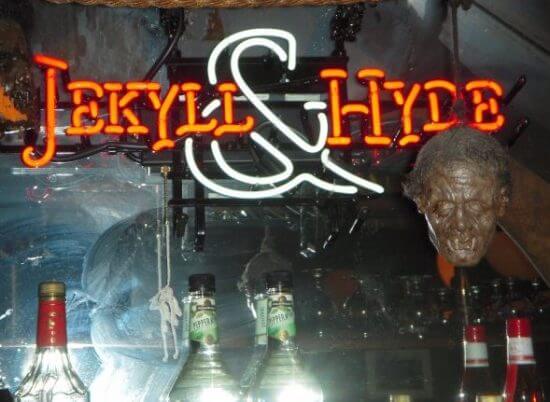 This eccentric and entertaining establishment is located at 91 7th Ave in the Greenwich Village area of New York City.  Jekyll and Hyde Club is open to adventurers and mad scientists from noon to midnight Sunday through Thursday and noon to 2 AM on Fridays and Saturdays. Reservations can be made via their website. 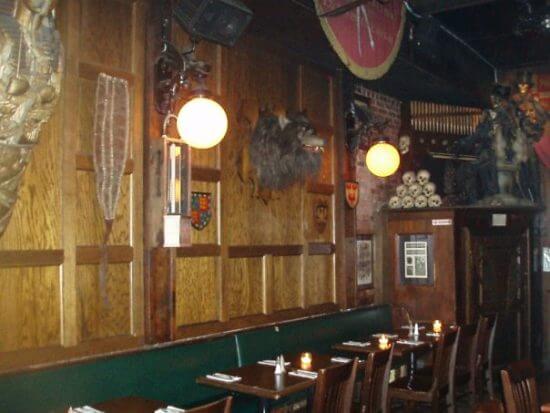 I had the delight of dining at the Midtown location (2001) and the Slaughtered Lamb on different trips to the Big Apple. Both experiences thrilled my dark heart and tickled my (funny) bone.  Midtown’s staff and characters made for a monstrously magnificent memory. 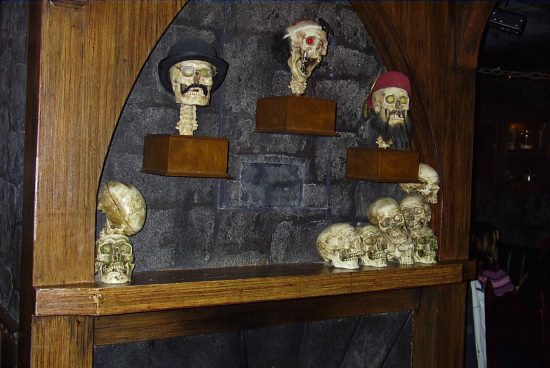 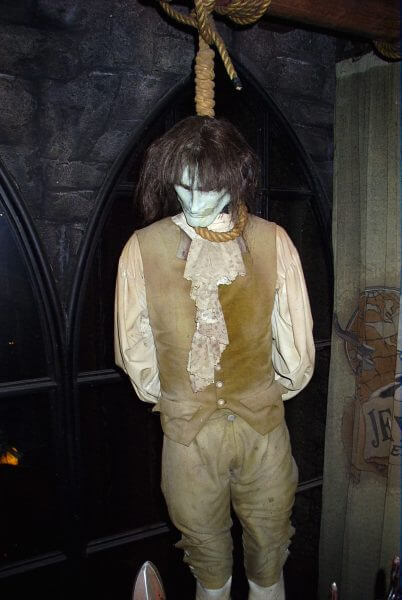 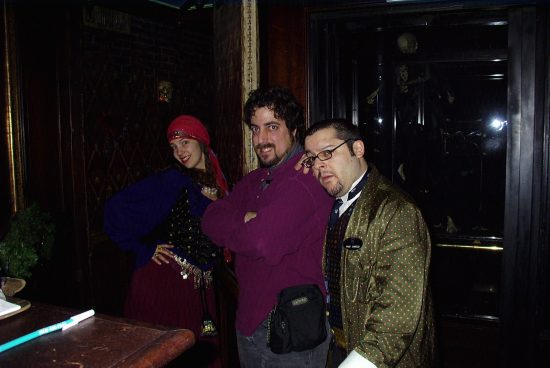 Have you had the fortune to stumble upon any of the Jekyll and Hyde club restaurants in New York City (or even the briefly open locations in Chicago or Dallas)?  Please share your eerie experience(s) in the crypt (comments) below.