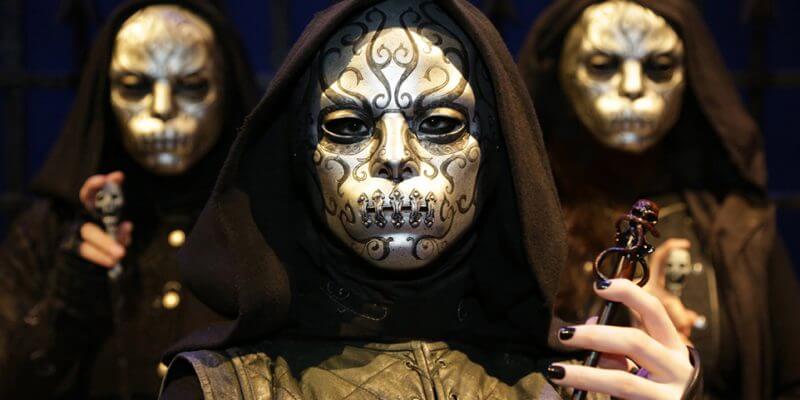 The evening begins with mood-setting smoky dry ice cocktails and canapés before guests step through the doors of the Great Hall, which has been magically transformed for Halloween. Over 100 floating pumpkins dance across the enchanted Great Hall ceiling while the long tables are covered in a feast of red apples, pumpkins and cauldrons of lollipops.

A delicious two-course dinner and drinks are served alongside props and costumes from the films. The full dinner menu is available here.

After dinner, guests are greeted with lanterns and invited to follow spiders into the Forbidden Forest set. Dessert is enjoyed next to magical creatures like Aragog the Acromantula and Buckbeak the Hippogriff.

Watch out for Death Eaters roaming throughout the evening. Dressed in original costumes from the movie, you’ll be able to see intricate details when they get up close.

When the meal is over, guests are invited to explore the Studio Tour after hours to see sets such as the Gryffindor common room and the Weasley’s kitchen. In addition, you can learn wand combat moves from Wand Choreographer Paul Harris.

Stop at Backlot Café for a complimentary Butterbeer before exploring a darker Diagon Alley. The lights are dimmed, the music is foreboding, and the streets are patrolled by Death Eaters.

To secure a spot for the enchanted Halloween event, head to the Warner Bros. Studio Tour London website.